They possess one of the world’s most well known coaches in Sven-Göran Eriksson, Ghana’s captain and all-time leading goalscorer, Asamoah Gyan, and a South American duo in Dario Conca and Elkeson that breed fear into the hearts of rival fans and defences all over Asia. Welcome to Shanghai SIPG. 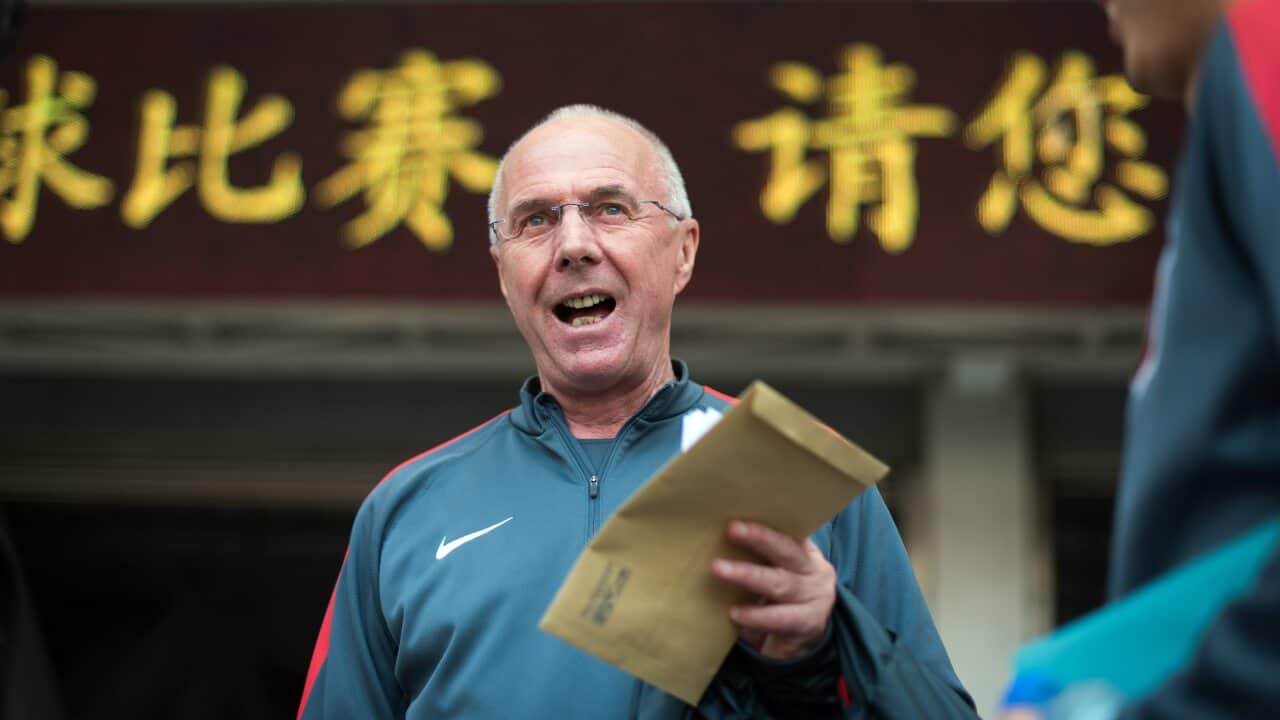 But there is more to the club from the world’s largest city than just big names and even bigger bank balances.

Formed in 2005, and then known as Shanghai Dongya, the club was created by the revered Xu Genbao as a home for graduates of his academy, Genbao Football Base.

They started at the bottom of the Chinese football pyramid in China League Two and youth development was at the club’s very core.

Advertisement
According to their general manager Sui Guoyang, that remains the case 11 years on.

“Youth development is always one of the most important targets,” he told The World Game, in an exclusive interview this week.

“Our club's predecessor, Shanghai East Asia, put a lot focus on youth development, and most of the players of our first team come from the club's own youth training system.”

In total 23 of the 33 players on their list have come through the youth system.

One of those players is Wu Lei, who holds the record for being the youngest player to play a professional match in China, making his debut in 2006 aged just 14 years and 287 days.

Still only 24 and with more than 200 games of experience under his belt, the attacking midfielder is, along with fellow academy graduates and first-team regulars Cai Huikang (26) and Yan Junling (25), the prototypical Shanghai SIPG player – a one team player, who has emerged from the youth setup.

“I don’t know how famous a player like Wu Lei is in Australia, probably not (much), but for me he is right now maybe the best offensive player in China,” Shanghai SIPG assistant coach and youth team boss Mads Davidsen told The World Game.

In the starting XI for their AFC Champions League play-off against Muangthong United a fortnight ago, five players were graduates of the youth system - with the others being Shi Ke and Yu Hai and the four foreign stars.

There was also a debut off the bench for 18 year-old striker Hu Jinghang, promoted to the first team this season.

“I think we have a good balance actually,” Davidsen said. “We have very experienced players, both in the foreigners and the Chinese, but we also have a lot of young players.

“We saw in the last game against Muangthong, Fu Huan a young right fullback played, and we even saw my player from my youth team, Hu Jinghang, he came on in the last minute, he’s only 18 years old.

“So it shows that at the same time as we buy and make sure that the team is strong enough to compete, we also try to have the next generation ready.”

The Chinese Super League, like most leagues in Asia, imposes a limit on the number of foreign players, with 4+1 allowed in the squad, and only 3+1 on the pitch at any one time, something Davidsen said is a positive for Chinese football.

“(Buying Chinese players) is almost impossible now because the prices are so out of range so the key, as I told the management earlier this year, will be who best develops young players, they will win in the future.”

Along with having a development squad (for ages 20-23), the club also has U-18, U-16 and U-14 teams, and has recently opened 17 football schools in and around Shanghai as they looks to strengthen their youth development system.

But it’s as much about winning now as it is in the future, and that is the responsibility of the experienced and well-travelled Eriksson.

Last year, in his first year as coach of Shanghai SIPG after leaving Guangzhou R&F, Eriksson guided SIPG to a second-placed finish, taking the title race to the final day of the season, only to be pipped by Guangzhou Evergrande by two points.

“I think we had a very good season last season,” Eriksson told The World Game.

“We didn’t win it but we came second and now we are in the Champions League so I think everyone was happy.

“Before the last season I don’t think anyone expected us to win the league, but the target was the Champions League and here we are.”

Despite being linked with international stars such as Wayne Rooney, Yaya Toure and Robin van Persie, the club made just one signing in the transfer window.

However, it is one that could give them that extra edge to go all the way in 2016, with the acquisition of Brazilian striker Elkeson.

The 26 year-old has been a dominant force in China and Asia in the last three years for Guangzhou Evergrande, winning the Chinese Super League golden boot in 2013 (28 goals) and 2014 (24 goals) and scoring the winning goal in last season’s AFC Champions League final against Al Ahli - capping off an injury plagued year in fine style.

Davidsen said the opportunity to sign Elkeson was too good to pass up.

“When we got the chance to sign Elkeson that was obviously a move we had to do,” he told The World Game.

“It was a great chance for us to basically complete our squad.”

While the lure of big international names is tempting for some clubs, Davidsen explained, in detail, the process Shanghai SIPG undertake when recruiting a player.

“We definitely don’t look at the name, I think that’s one thing that makes us different from some of the other clubs,” Davidsen said.

“If you have a very talented left-back coming up then maybe you don’t need to sign a left-back etc.

"So it’s a long process where in the end you are sharp on which positions you need, which profiles and which description you want to go for.

“When we have that detail in place, then my work is starting to first screen the market, screen what is out there, what is possible and then when we have a good screening process we start to scour more specifically and we say 'okay now we have 20 players, we have to scout them' and then in the end we will have maybe three left and then we will try to get one of the main targets.”

Looking at the season ahead, Eriksson believes that, on paper, it will be the toughest one yet, with clubs like Hebei China Fortune and Jiangsu Suning strengthening in the off-season.

“I think now you have six maybe seven clubs who can compete to win the league,” he said, from Shanghai.

“So it makes the league very competitive.

“This is on paper of course, but I think in all it is very good for Chinese football and the Chinese Super League.

"It’s not just (Guangzhou) Evergrande with 15 points gap every year, now they have competition and I can see other teams who can go the whole way.”

Eriksson is one of the poster boys for the new era of Chinese football, joining fellow high profile coaches such as Luis Felipe Scolari, Alberto Zaccheroni and Mano Menezes, who are helping to usher in a new era of professionalism in the Chinese game.

For Eriksson, it is a great time to be in China.

“First of all to live in Shanghai is a great pleasure, it’s a beautiful city,” he said.

“Very international, you have and you can do whatever you want to do. It’s like living in London or Paris.

“(The) Chinese Super League is not Premier League or German league or Spanish league or Italian league yet but I think you can compare our league with a lot of other European leagues.

“To be in China now, if you love football, I think it’s the right time and right place to be.”

And for Eriksson, Shanghai SIPG is the right club.

With his contract at Guangzhou R&F expiring at the end of 2014, the club, who had just been taken over by the Shanghai International Port Group, tempted the former England and Lazio boss with a vision of being the best club in Asia.

“SIPG came and they presented to me what they want to do in the future, long-term plan to try to be the top club in China and top club also in Asia,” the 68 year-old said.

“They never said that they must win it but they want to be established as a top club in China and in Asia.

"That’s why I said, ‘wow, that’s a big challenge’ and I am very happy that I accepted that. It’s a good club (with) very, very good people.”

Guoyang said SIPG is “determined to develop into a professional football club” such as those across the rest of the world, particularly in Europe.

“The history of Chinese professional football is only 22 years (old). During the process of developing, there is a lot to be improved in the Chinese Super League.

“It is a common goal for everybody working in football in China that we will build up a football league and culture which is recognised by the world.”

One plan involves having their own purpose built football stadium, which Guoyang hopes can be built within three years.

“It is listed in (the) Shanghai City Government's plan to build a new football-focused stadium,” Guoyang said.

“The stadium will be built by the city government, and managed and used by our club after construction.  There's no official news so far, but we hope the stadium could finish construction within three years, and the capacity would be between 40-50,000.”

With a healthy average of 26,381 in 2015, there is plenty of room for growth as they look to match the efforts of Beijing Guoan and Guangzhou Evergrande, who both average more than 40,000.

A good performance in the AFC Champions League will help and the club are determined to perform well, after flying into Melbourne on Saturday to give their squad plenty of time to prepare ahead of Wednesday night’s opening fixture against Melbourne Victory.

“It’s important of course but it’s very difficult because I think our group is the toughest of them all,” Eriksson said.

“It’s important that we do well and play good football, but we have seen Melbourne and we know that it’s a very, very good team. They can play football, (they are) technically good, they are very aggressive so we know it’s going to be a very difficult team.”

Eriksson remembers Kevin Muscat from his time as England manager, with the Melbourne Victory coach a late substitute in Australia’s historic 3-1 win over England, then coached by the Swede, in 2003.

“I remember him (Muscat), I know that he was in England,” he said.

“He’s doing a great job there for sure, so I look forward to meeting him.”

While the two coaches will reacquaint themselves this week, Australian audiences will get introduced to Shanghai SIPG for the first time.

Take note of the name, the club are building for the long-term and they’re determined to need no introductions in the years to come.