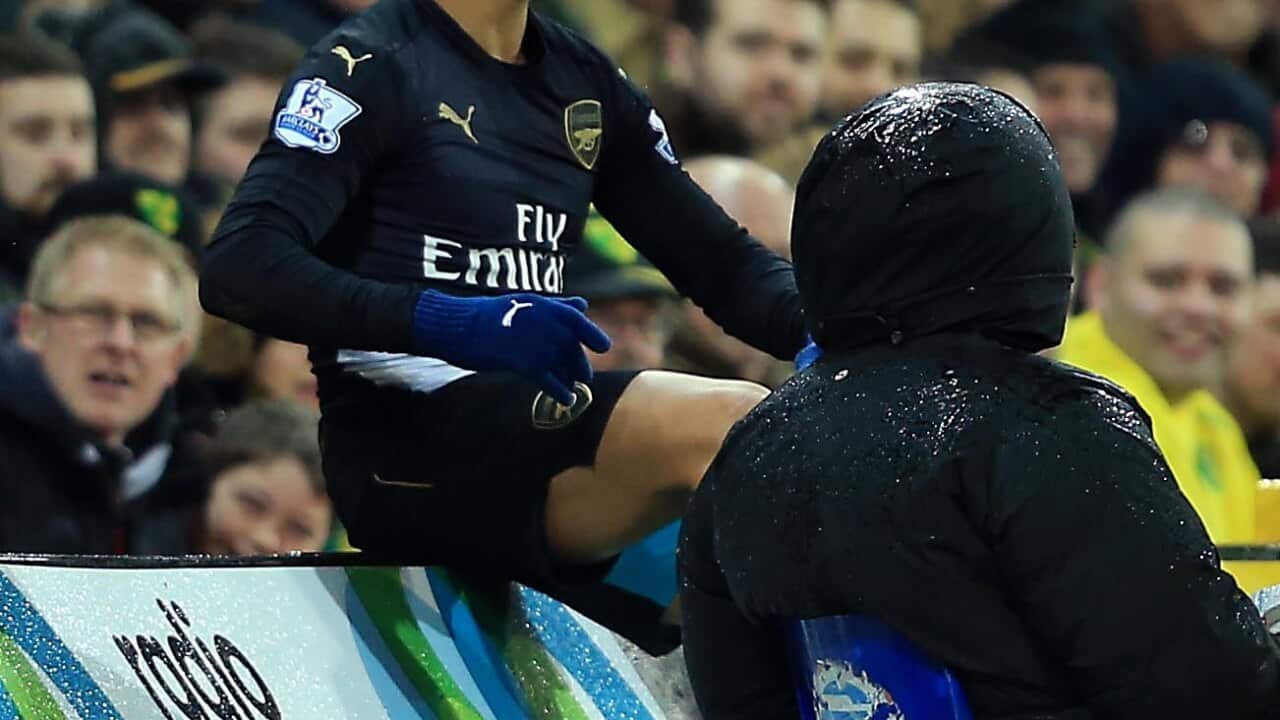 Alexis Sanchez fell awkwardly into a camera pit after appearing to be pushed by Ryan Bennett Source: Getty Images

The Chile forward landed heavily in the cameraman's area on the touchline during an incident in the first half and was later forced off with a hamstring injury.

Advertisement
With Sanchez now likely to be sidelined for a number of weeks, Wenger defended his decision to play the 26-year-old in the 1-1 draw against Norwich.

Having felt his hamstring after the Champions League victory over Dinamo Zagreb, Wenger said all of the club's medical tests showed he was in peak fitness to start at Carrow Road.

While the Frenchman said he is happy to take the blame for the number of injuries being accrued by his squad - he also pointed to Sanchez being pushed into the camera area as a potential reason for this latest blow and feels it could have been worse for the former Barcelona man.

"First of all it's dangerous to have a camera there," Wenger said.

"He could have killed him. Secondly, he (Bennett) didn't need to push him like he did. I think the camera position was absolutely dangerous.

"When he was pushed into the boards on the side of the field that did not shock anybody. That injury can come from that as well. I'm not expert enough to know but if you want to blame me I'm okay with it."

By the time Sanchez then limped out of the contest in the second half, Arsenal had already lost Laurent Koscielny to a hip injury while Santi Cazorla was playing on despite taking a blow to his knee.

Wenger admitted after the game the Spain midfielder had been "playing on one leg" but backed his decision to leave the 30-year-old on the pitch despite some problems with his mobility.

"It could be a rupture," Wenger said.

"What happened to Cazorla, is that the ball was in the air, he wanted to pick the ball out, and he didn't see Gary O'Neil who came in and went through him.

"I don't know more than you. I have to wait until we have a complete assessment from the specialist. We know his external knee ligament has been touched. He might have a capsular problem as well, but I don't know for how long he will be out.

The fixtures over the festive period come thick and fast but Wenger is adamant he will not rush back any of his missing players to fill holes in his side.

"I will not take that gamble," he added.

"A player who comes back goes always through a period where the reconstruction of the muscle takes longer than the time where they don't play.

"There is always a risk when a player has been out for five weeks that in the first two or three weeks he has a recurrence of the injury because nobody can tell you the risk doesn't exist."