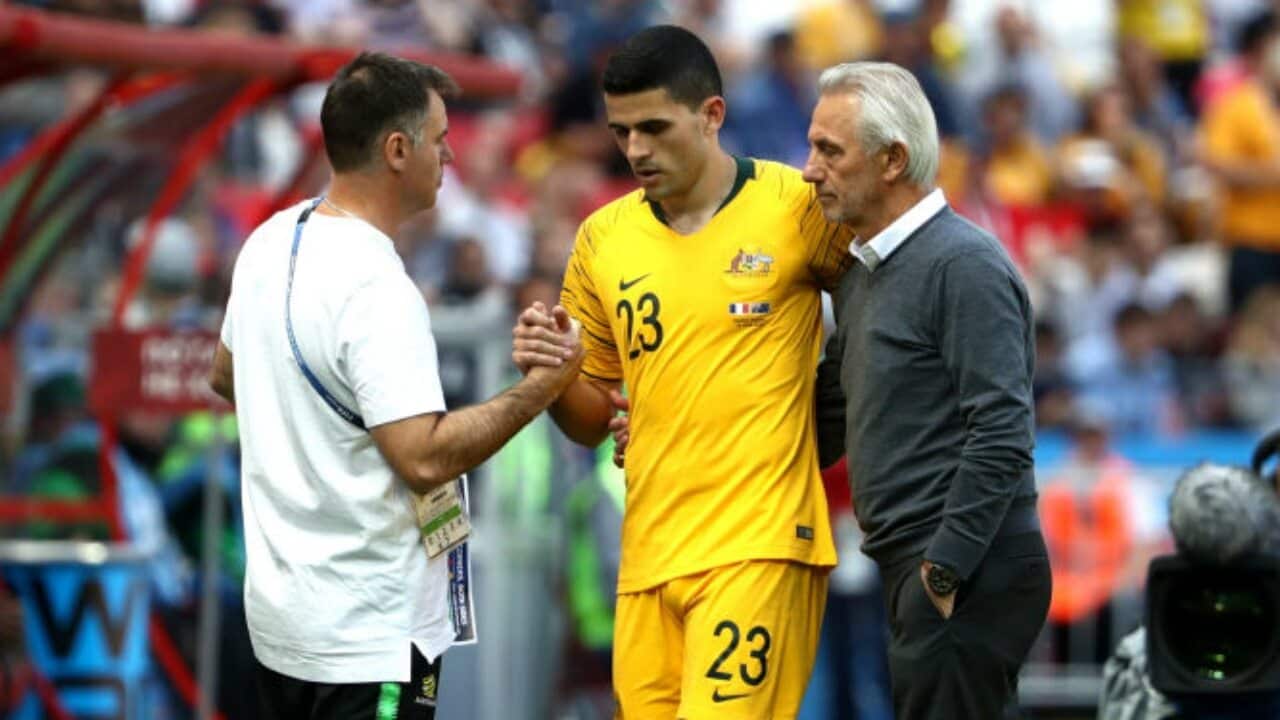 Australia departed Russia with a solitary point following their 2-0 defeat to Peru in Sochi.

And with them goes the Dutchman, with Graham Arnold now taking the reins ahead of January’s AFC Asian Cup in the UAE.

Van Marwijk brought organisation and structure, transforming Australia from an all-out attacking team into a counter-attacking outfit that was hard to break down.

Advertisement
After a slow start to the tournament Rogic produced the trademark twists and turns and penetrating runs and passes he’s renowned for.

But it was to no avail as the Socceroos bowed out.

Following the heart-breaking loss in Sochi, Rogic said the 66-year-old had a positive four-month tenure in charge of the national team.

“I thought we’ve made great progress as a team, ultimately our goal was to progress to the next round and we weren’t able to do that,” Rogic said.

“I’m sure we’ll all learn from it, we’ll be better from the experience.

“It’s great to work with the management and stuff, it feels like they added to what we had built on and they took us a bit further.

“Unfortunately we just fell short at the end. I enjoyed working with Bert, he’s a good person. He has great experience.

“It would have been nice maybe to work with him a bit longer, but that’s football. You move on.”

Rogic, 25, will be pivotal as his former Central Coast Mariners mentor now assumes the reins.

“We can build on this [the World Cup]. We’ve definitely learnt a lot,” he added.

“Playing in a World Cup against great opposition, it’s the pinnacle of international football.

“It’s only natural you learn from these experiences. Disappointment is the overriding feeling right now. I’m sure in the coming weeks and months we’ll reflect on it a bit more.”

Australia needed to defeat La Blanquirroja and for France to beat Denmark to stay alive in the tournament.

Despite creating more chances and having more shots on goal than Peru, the Socceroos couldn’t find the back of the net at the Fischt Stadium.

The South Americans were clinical, with Andre Carrillo and Paolo Guerrero getting on the scoresheet.

Rogic admitted a lack of a goal-scoring threat was their ultimate undoing in Russia.

“We probably had a few chances in the first half that we didn’t capitalise on,” he said.

“We’re finding it a little bit difficult to score goals and then we concede – it was a great strike – but that was their only attack in the first half and the next half was crucial and they got it.

“It kind of killed the game off. We had chances but we just need to be a bit more clinical maybe.

“[But] It’s been a great experience, it’s great to be here. The feeling right now is disappointment.”