Why are Barcelona in crisis? A quick explainer

Out of the UEFA Champions League, one win in their last six matches and a nine-point lead cut to zero – there can be no doubt now that Barcelona is in a crisis situation. 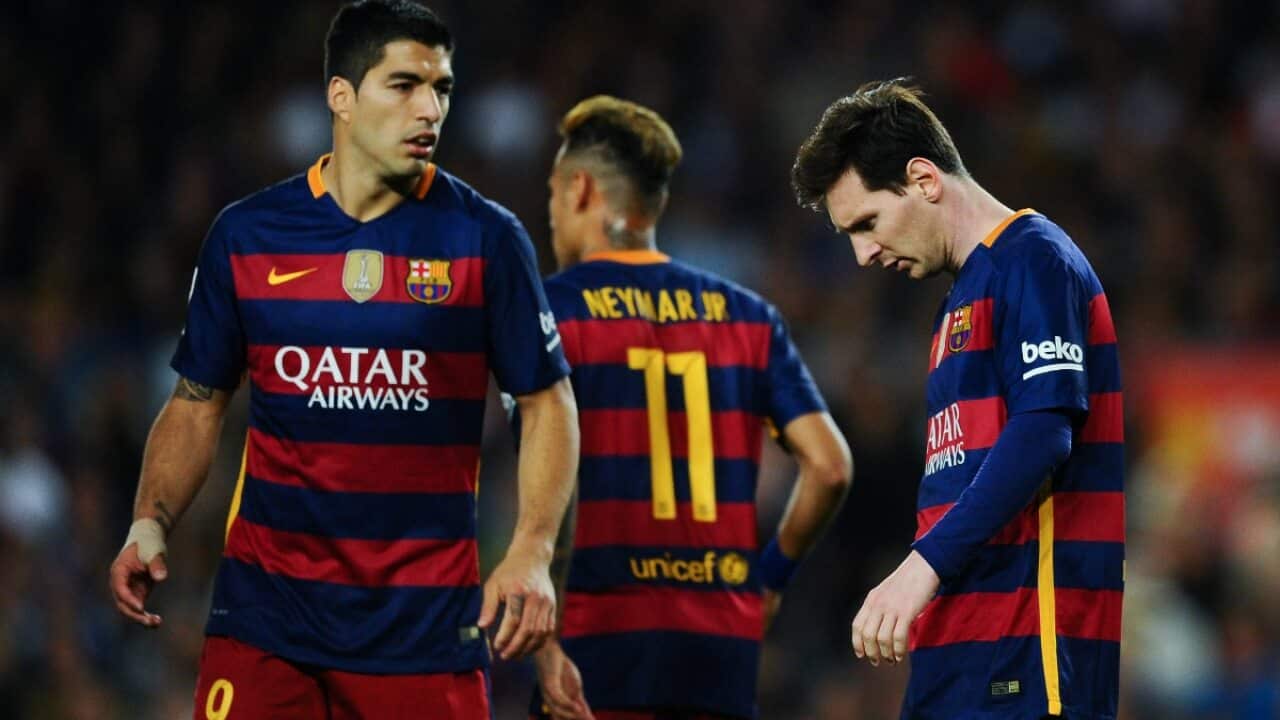 But how did the team that hadn’t lost in 39 games go to one that can’t win? It’s a series of small issues that have snowballed at the worst possible time for the Catalans.

Their season is on the line when they face Deportivo La Coruna away on Thursday morning (AEST). Fail to win and the title is almost certainly gone, win and given their fixture run they should be able to hold off Real Madrid and Atletico Madrid - given they have superior head-to-head records and lift the trophy in four weeks’ time.

Here are the 5 main problems last season’s treble winners are dealing with and what options they have to fix it.

As Gabrielle Marcott pointed out in a recent ESPN blog, “In the 12 months leading up to this past weekend, Lionel Messi, Luis Suarez and Neymar played a combined 16,058 minutes of football for club and country. That is substantially more than other top European sides. Compare it to the front three of Bayern (18% less), Manchester City (42% less), Real Madrid (57%) and Atletico Madrid (63%).”

“In the past 30 days, Messi, Suarez and Neymar combined scored four goals in all competitions.

When Barca took on Atletico Madrid in the second leg of their quarter-final UCL tie, Atleti, as a team, covered an extra 12 kilometres compared to Barca. Given the average distance covered by a player is about 10kms it was almost as if Atletico played with an extra player.

Options they have: Hope that the starting XI can hold out for another six matches (five in La Liga and the Copa del Rey final) or start to rotate the front three and play the likes of Munir, Sandro and Arda Turan and hope fresh legs combined with lacklustre opposition will bring goals.

Barca were unbeaten before the international break at the end of March.

Once they got back, and they only got back a few days before El Clasico they faced a Real Madrid side who only had one player who had to make the same trip to South America (Marcelo).

It’s no surprise that Madrid were able to over-run Barca and score two goals in the last 15 minutes of that match. Barca meanwhile had taken their foot off the gas as they attempted to conserve energy ahead of the upcoming first-leg Champions League match with Atletico in three days’ time.

Barca went on to win that first-leg but then came a tough away trip to San Sebastian to take on Real Sociedad where they hadn’t won since 2007. Knowing they had to face Atletico in Madrid in three days’ time, Luis Enrique decided to rest Andres Iniesta, Ivan Rakitic and Jordi Alba with Suarez already missing out due to suspension.

The make-shift line up was not good enough to break the Anoeta curse as Sociedad won 1-0. This was then followed by two confidence shattering losses to Atletico and Valencia in the space of six days.

Options they have: Barca's last five matches are all against sides who are in the bottom seven with Deportivo looking to be the biggest challenge. Win that and they should be able to turn their form around given they no longer have the UCL to focus on.

Barcelona’s first XI looks incredible strong when everyone is fully fit, but Luis Enrique has very limited options on the bench.

In the 2-1 loss to Valencia he didn’t even bother making a substitution. Down 2-0 he looked at his bench and saw four full-backs (Dani Alves, Adriano, Aleix Vidal and Douglas) a central defender (Marc Bartra) and Munir, a forward who has only managed four goals in 25 La Liga matches.

Of those not on the bench, Arda Turan (who was suspended) has failed to integrate competently into Barca’s system since he officially arrived in January, while Jeremy Mathieu has had a disastrous season and been blamed for numerous goals conceded when he has played.

Options they have: Very little in the next four weeks, but long-term Barca must find a way of convincing quality players to play bit-roles or keep a hold on talented youngsters who leave the club looking for more first-team football. i.e Gerard Deulofeu and Denis Suarez.

This one is hard to quantify, and publicly the club denies that there are any issues, although Rakitic did admit “the dynamic isn't good and we have to change it”.

Barcelona players are not their regular selves – there is infighting as well as despair and frustration. Against Valencia after early chances did not go in and Valencia themselves scored, Barca's build-up play became impatient and sloppy.

Options they have: This is where Luis Enrqiue's motivational skills must come into play. Different players will require different things. Senior players must remember all they have won and keep a cool head when goals don't come straight away.

This is out of Barca’s control but there have been commonalities between the way sides who have frustrated them have defended.

- The number 9 or striker blocks the pass from the center-backs to Sergio Busquets so the back four are the one with most of the possession and can’t get the ball to the front three.

- The team sit deep and almost allow Barca to have free reign on the wings – knowing that neither Jordi Alba or Dani Alves are particularly good at crosses nor are Barca’s front three great at converting those aerial passes – and they block out the center area of the pitch so MSN has very little opportunity in the box.

- Very little room between the back four and the midfield, which is where Messi most likes to operate.

Options they have: In the past Barcelona overcame Busquets being blocked by having Xavi drop deeper and offer another way to bring the ball out - Rakitic is best placed to do the same. The other option is to have Pique, who is very comfortable on the ball, bring the ball forward.

As for teams sitting deep and offering little space, the likes of Messi and Iniesta might have to shoot from further out and hope that if they don't score Suarez and Neymar are ready to pounce any time the goalkeeper spills the shot.