Why Sampaoli is Barcelona's number one target

There is a famous photo from the early days of Jorge Sampaoli’s coaching career in a regional league in Argentina. Sent off for persistent complaining, he wandered out of the stadium, climbed up a tree and watched the rest of the match from his perch. 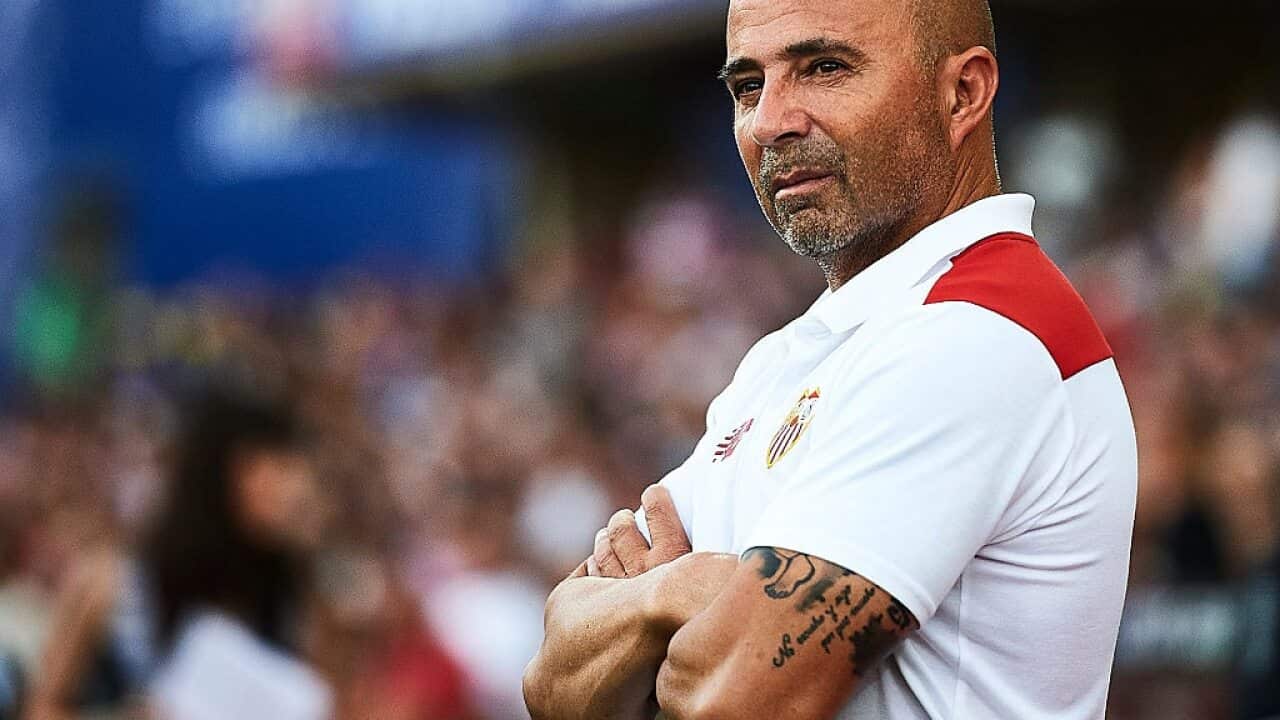 The story is an excellent example of the obsessive commitment which has taken him so far from such humble origins.

And it also leads to a question; how high can he climb? Speculation currently links Sampaoli to the Barcelona job – and he would be a thoroughly logical choice to replace Luiz Enrique.

An inspired debut season in La Liga with Sevilla is merely confirming the style and swagger he showed and the success he enjoyed on the other side of the Atlantic.

Advertisement
Football is never only about what you do. How you do it is a fundamental part of the appeal.

In Sampaoli’s case it is hard to take your eyes off him. Pacing up and down his technical area he looks like a battery operated toy, and sounds like a little Chihuahua, endlessly yelping away at the referee.

Getting sent to the stands is a frequent occupational hazard. He was banned from the touchline for last week’s 2-1 Champions League win over Leicester City, and could be seen up in an executive box, kicking away at the glass screen.

But his teams manage to be even more dynamic than he is.

He sends out his men to grab the game by the throat, relentlessly pressing the opposition in their half of the field, throwing both full backs forward at the same time to create two-against-one situations high up the pitch and playing at high tempo with furious energy.

It all comes straight out of the book of Marcelo Bielsa, the man recently touted by Pep Guardiola as the best coach in the world.

Bielsa, who has signed with French club Lilel for next season, and Sampaoli come from the same region of Argentina. But they have very different backgrounds.

Bielsa is from a distinguished family of lawyers – his brother was recently Argentina’s Foreign Minister. Sampaoli, whose playing career was ended by injury at the age of 19, has had to fight his way up from the bottom – which meant that it took him time to make an impression.

After losing one of his early jobs Sampaoli even wrote to Bielsa, who he did not know personally at the time, to apologise for having failed to put his principles into better practice.

Argentina has always been an exporter of coaches to the rest of the continent, and Sampaoli went north in search of opportunities, bouncing around Ecuador, Chile and, mainly Peru. His big break came when he took over Santiago giants Universidad de Chile in 2011. Finally he had at his disposition a group of players good enough to carry out his attacking ambitions.

There was a night, in October of that year, when the entire continent sat up and took notice. Away to Rio de Janeiro giants Flamengo, with Ronaldinho in the line up, Universidad de Chile won a 3-0 victory so convincing that the scoreline does not begin to do justice to their domination. The match was in the Copa Sudamericana, a Europa League equivalent, which Universidad de Chile went on to win in style.

Next came the Chile national team job. It allowed Sampaoli to add a few extra storeys to the house that Bielsa built.

Between 2007-10, Bielsa had groomed an impressive generation of young Chilean players, successfully transmitted his philosophy and attacking mentality, and given Chilean football the identity it had always lacked.

Sampaoli inherited the players and took them further. In the 2014 World Cup, they beat the Socceroos, sent holders Spain home early and only succumbed to hosts Brazil on a penalty shoot out – Chile’s best ever World Cup, with the exception of 1962, which they hosted.

And then a year later – at last – came a senior title. On home ground Chile won the 2015 Copa America. Ninety nine years after the competition was inaugurated, Chile could finally put the trophy in their cabinet.

They beat Argentina on penalties after the final had finished goalless – and Sampaoli had showed a flexible side to his tactical approach.

An obvious risk of the Bielsa/Sampaoli model of play is the space that it can leave the opposition to launch counter-attacks. Bielsa had seemed inflexible on this point, but Sampaoli had been studying how to make a subtle alteration to the balance of his side.

His most dynamic midfielder was Charles Aranguiz, who would normally be expected to link up with the attack and drive on into the opposition penalty area. Instead, Aranguiz was given the task of isolating Lionel Messi from his team-mates. It worked, Argentina were held at bay and Chile had their title.

There is, though, still one question mark hanging over Jorge Sampaoli, and, again, it has to do with his Bielsa connection.

On his two previous European adventures (there was a very brief spell with Espanol in 1998, but then the job of Argentina coach came knocking) Bielsa had made an impact, both with Athletic Bilbao and with Marseilles.

But with both clubs the team appeared to run out of gas before the end of the season. His is a style of play that puts intense physical demands on the players, who seemed to be running on empty by the business end of the campaign.

Might the same fate befall Sampaoli’s Sevilla? They could have had Leicester dead and buried by half time last week, but it was a different story by the end of the evening.

True, his team bounced back to win the Seville derby at the weekend. But both in the domestic campaign and in the Champions League, it will be fascinating to see whether Sampaoili’s Sevilla can keep running all the way to the line.

And also to see whether Sampaoli will soon be given bigger trees to climb.