Dario Vidosic has joined his fifth A-League club of his career, and he is just one of many players who get recycled through the league. Sebastian Hassett explains why this is increasingly happening and how it is hurting the competition. 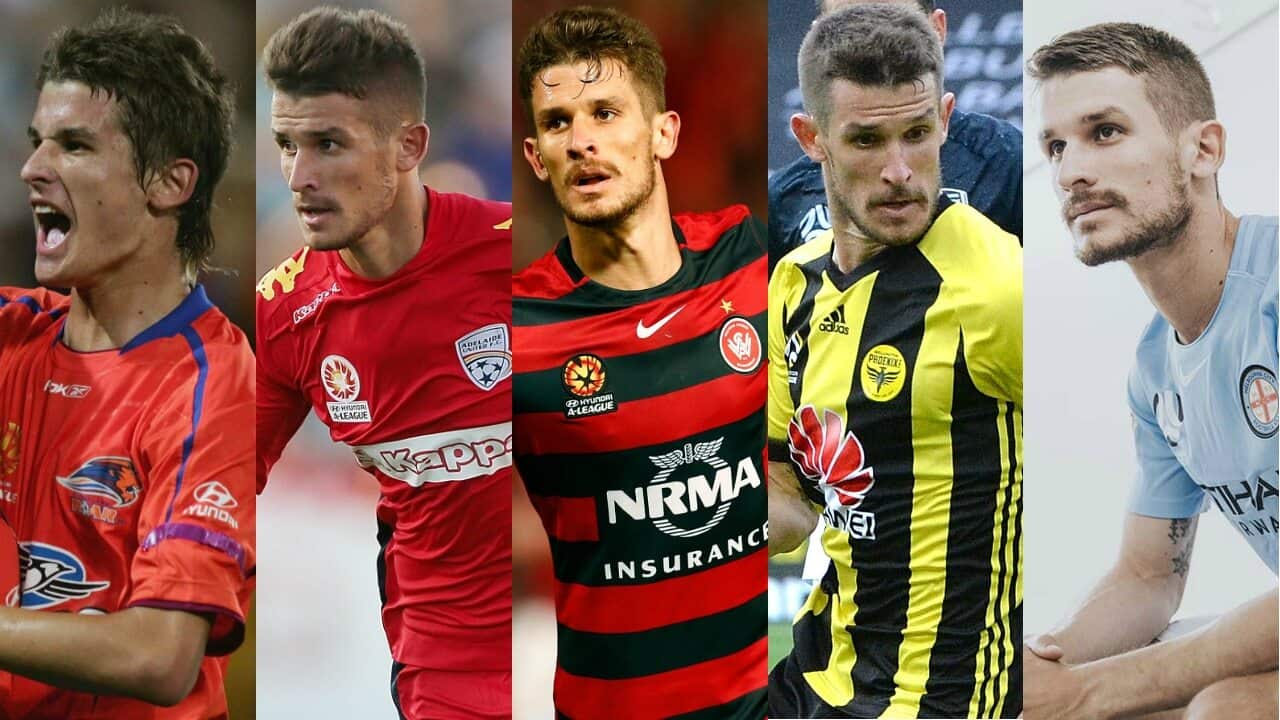 Poor Dario Vidosic. He’s done nothing wrong – but his move from Wellington Phoenix to Melbourne City has been the straw that’s broken the camel’s back.

Just 18 months ago, Vidosic scored the goal that put the Western Sydney Wanderers into the grand final. But between 2011 and 2013 he was a favourite at Adelaide United and noted as one of the league’s best players. Before that he was a poster boy for youth development in Queensland at Brisbane Roar.

See the problem? The whirlwind of clubs and locations in such a short space of time (and we haven’t even mentioned overseas stints with FC Nurnberg, Duisburg, Arminia Bielefeld, FC Sion, Liaoning Whowin and Seongnam FC) means he'll be remembered, for the most part, as a journeyman. That's a shame.

Advertisement
It’s not that anybody dislikes Vidosic – he’s a likeable guy who brings professionalism and a warm, intelligent personality to any dressing room – but more that he’s the latest to take advantage of the A-League carousel. And social media hasn't been forgiving.

Vidosic is not alone. Far from it. And you can't blame him, either. Rather than a league of excellence, the A-League now feels like a giant recycling bin, with scraps being endlessly tossed around until there is no more meat on the bone.

It is one of the many issues presently tugging at the fabric of the game. Don’t bother trying to make an emotional connection with any of your A-League club’s players – chances are they’ll be gone (Alex Brosque and Leigh Broxham aside) at the end of the year. It makes a mockery of the competition.

Question: is this the players’ fault, the clubs’ fault or the fault of the A-League regulations? Answer: all three, depending on the case. But it’s the final option that has laid a flawed groundwork.

Coming into January, we’re set to see a swathe of A-League clubs “release” players – only to see them signed up by a rival team a few hours later. It’s not a good look.

Clubs can’t charge domestic transfer fees, and so if a player wants to move, clubs are readily applying the theory that an unhappy player can lead to an unhappy dressing room. Ergo, they leave for nothing.

But clubs aren’t always being held to ransom by players. Indeed, job security in the A-League has become a thing of the past.

A three-year contract has become an unthinkable luxury – even getting two years is seen as a serious commitment. The rest? They’re treading water on year-to-year deals. You'll hear a lot more about this issue soon from Professional Footballers Australia. The data they have on the "churn-and-burn" culture, frankly, is shocking.

Clubs don’t feel the need to commit because there’s always the prospect of a better alternative in the wings. Our sport has over 200-plus countries providing new and more exciting options at left-back. You can sign a new player overnight, without having to wait for a draft or trade week.

And with squad sizes so small, what if a key player gets injured for a year? You’ve lost a chunk of your salary cap and a valuable squad position. Your plans are badly impacted, and by the time the “injury replacement player” has adjusted, the original player is healthy again. Lose-lose.

The end result is that everyone has become afraid of making an investment. Clubs are loathe to over-invest in players. The few truly premium players know their worth and are constantly seeking something better; but the other 90 per cent of players are already wondering about their next move barely weeks after signing. How else do you pay the mortgage?

If you think this represents laissez-faire capitalism in all its choose-your-own adventure glory, that’s fine, but professional sport isn’t predicated on that. And success rarely comes from such instability.

It also shows that the combination of the salary cap and prohibitive squad sizes are now having a hugely detrimental impact. Ultimately, everyone is losing.

It used to be exciting to see new players coming in but it's mind-numblingly repetitive seeing the same players moving around. Few will promote a young player anymore when they can sign a proven "squaddie" instead.

Like many things in the A-League, what worked in 2005 no longer works in 2017. The Super Rugby model that worked so well for both rugby union and football has been ripped apart by market forces.

People are moving away from the vanilla, one-size-fits-all model and seeking more passionate, tribal experiences, where symbolism and identification are powerful tools – or they're seeking pure novelty, like the Big Bash.

Unfortunately, the A-League murdered its tribal nature by killing off active fans and the novelty factor of the first three seasons is long gone. It's now stuck in a grey, anonymous middle-ground.

These factors cannot be ignored. And as an ever-growing pool of journeyman gets set to up stumps from one club to another this summer, it just makes you feel like what matters to the players, clubs and fans – lest we even talk about the game’s administrators – is very different indeed.