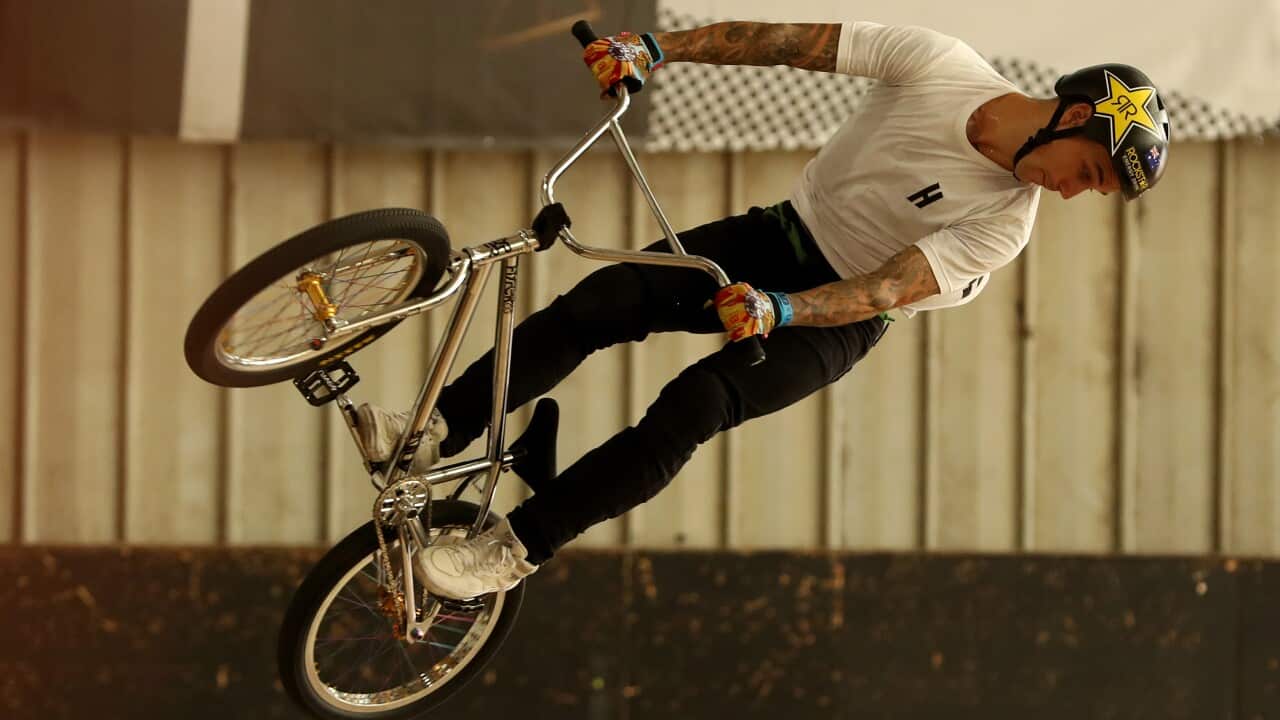 Martin topped his rivals with both of his runs and stood atop the podium as the Australian national anthem played again, with himself and compatriot Brandon Loupos having dominated the UCI world championships since its inaugural edition in 2017.

Both have won two titles apiece but after a freak injury to Loupos in his first run, it was down to Martin to go for the win.

He delivered in spades with his big trick-laden runs over the Montpellier Park course, bringing the viewers and commentators to their feet as he debuted a front bike flip, previously unseen in the competition.

Advertisement
His score of 94.90 points was only approached by his second run, where Martin chose fewer but more challenging tricks, with his near-flawless run judged to a score of 93.30 points.

Speaking from hotel quarantine back in Australia with SBS Cycling Central, Martin was effusive after a long lay-off to return with immediate success.

"Super stoked to be two-time world champion," Martin said. "I had set it as a massive goal and to tick it off - after a year and a half of events being called off going into the worlds - it couldn't have gone any better."

The new trick, the front bike flip, wowed the spectators and the judges, but Martin revealed just how close it had been to finishing up as a run-ender and, potentially, a nasty injury.

"I got pretty lucky with it," Martin said. "I did almost miss the catch, but I did grab it and pull it under me. I did know it was a close call when I started to do the trick, you get that feeling, but you stay relaxed in the moment, knowing that you've been doing this trick every day. It was a close call and it got my heart pumping."

It was a year and a half without competition for the professional BMX rider, with the pandemic and travel restrictions seeing the cancellation of events all over the world.

"I guess I'm super lucky that my sponsors stayed onboard, that kept me afloat," Martin said. "Then, as with motivation, I had the Olympics in mind. It was hard, it was such a long way away and it did get extended that extra year.

"I just kept working towards the Olympics, I always had that in the back of my mind. And I enjoy doing what I do, I enjoy riding my bike and working hard."

BMX Freestyle will be making its debut as an Olympic sport at the Tokyo Games.

Previously, the highest level of competition was the X-Games, where Martin won the BMX Park event twice in 2018 and 2019, also adding the BMX Dirt title in 2019.

Its sometimes a question whether the Olympics is recognised as the pinnacle of the sport, but for Martin, it has been a driving ambition since it was announced.

"I've been doing this for a long time now. When I first started competing and travelling eight years ago, there was no talk of the Olympics and X-Games was our biggest event," Martin said.

"For me, having Freestyle BMX in the Olympics is unreal, I couldn't have asked for anything better. It's good for the sport and it brings more eyes to the sport and hopefully gets a lot more kids on bikes and outdoors."

Martin went as far as preparing his own training facilities, building his own skatepark for $70,000 in his backyard.

"The purpose of me building a skatepark in my backyard was to get to the Olympics," Martin said. "In 2017, the level of riding increased a lot more. I only had concrete skate parks around me, no proper training facilities to increase my ability on my bike.

Martin's participation has been confirmed by the Olympic team, though unfortunately, he will be the lone male BMX freestyle rider after Loupos' injury meant that the chance of Australia qualifying two riders for the Games fell through.

Natalya Diehm will represent Australia in the women's event, with the rest of the BMX and Mountain Bike squad including Dan and Bec McConnell (men's and women's MTB), Saya Sakakibara and Lauren Reynolds (both women's BMX Racing).

Martin was very appreciative of the support from AusCycling in recent years, with a new training facility built just down the road from him on the Gold Coast, with coaches and trainers for gym work, in particular, being helpful.

However, when it comes to competition, it's all on Martin to devise the best way to win Tokyo gold.

"It's purely individual, you go there and do what you do best. You don't really have a coach in this sport," Martin said.

"I think in the future that it might lead that way but I've only ever done it myself. I just try to find my strengths on the course and work out where I can use that. That big alley-oop transfer, no one was doing (that) and I'm pretty comfortable with that."

With just five weeks to go until Martin and the Australian squad fly out to the Olympics, the Logan-born BMX star is eagerly anticipating the biggest stage of his career.

"I can't wait, it's been a long journey to get there and the wait's almost over," Martin said. "It's five weeks out now and it's going to be super exciting, I've got some prep to do when I get out of this hotel!"

You can watch the highlights from the
2021 UCI Urban Cycling World Championships here on SBS On Demand
, with the BMX Park competition featured at the end of the highlights.