Yates pounces on Sega di Ala as Bernal shows weakness

Simon Yates (Team BikeExchange) was on the attack of Stage 17 of the Giro d'Italia, jumping away from the maglia rosa group in the final three kilometres of the Sega di Ala, and for once, Egan Bernal (INEOS Grenadiers) couldn't follow. 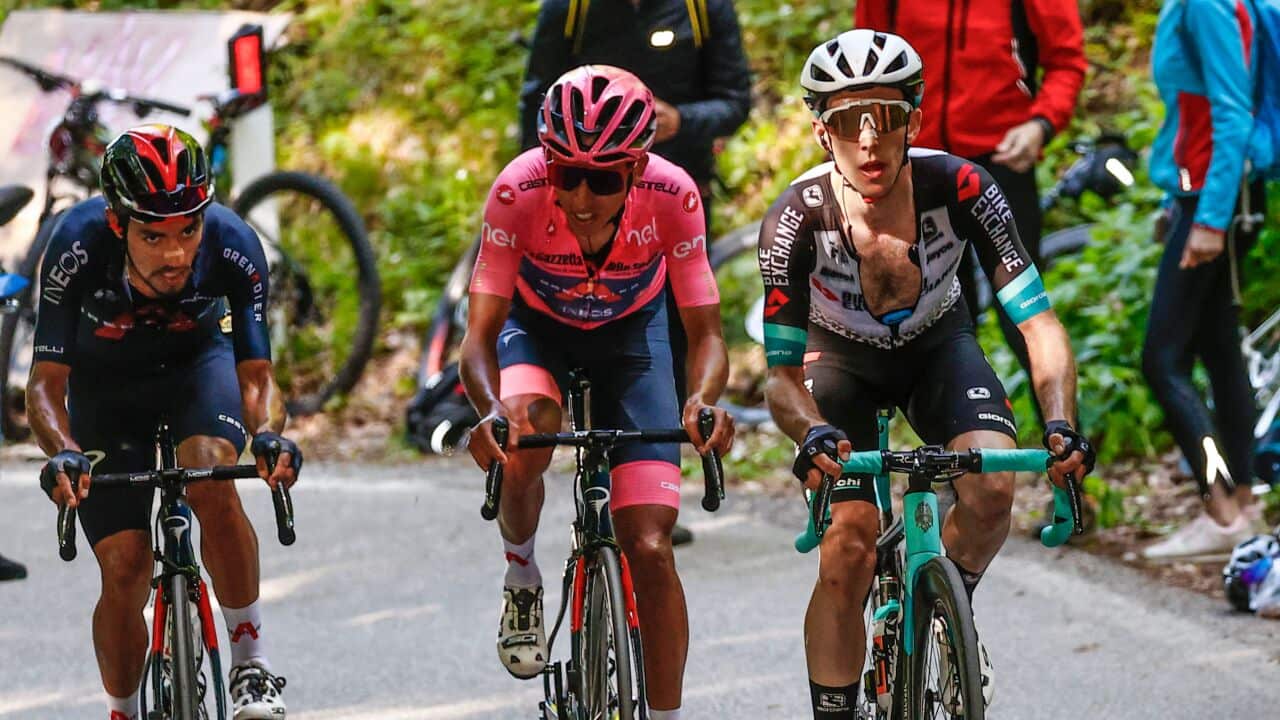 It was an unexpected sight atop the new Giro d'Italia summit finish, as the main group of contenders was whittled down to the point where the big attacks started to go, it wasn't Bernal on the front foot.

The Colombian has initiated or covered every major move handily in the opening 17 stages of competition, but a surge from Simon Yates with three kilometres remaining saw him on the back foot and with little answer in the final kilometres. He followed teammate Dani Martinez's wheel and even received some welcome pace-making from second-placed Damiano Caruso (Bahrain Victorious) who was looking to protect his spot on the podium.

Caruso powered clear with Diego Ulissi (UAE Team Emirates) in the final metres, securing three seconds advantage over Bernal as he was in clear stress as he struggled over the line. It was a very different sight from the 2019 Tour de France winner that had thus far cleared every hurdle at the race with seeming ease.

Bernal still holds a sizeable lead in the general classification, two minutes and 21 seconds over Caruso, with Yates moving into third at three minutes and 23 seconds in arrears. Despite the losses to his now nearest rivals, all the other top ten on the general classification slipped further behind the pink jersey, with only Almeida shortening his deficit as he moved up from tenth to eighth and grabbed back over a minute with a powerful late attack.

“Yates was really strong and impressed on the climb," said Bernal. "I tried to go after him but I made a mistake. But I’m satisfied. It wasn’t my best day but I hardly lost any time, just a few seconds to Caruso, who is the one I've got to watch the most. Yates has pulled back a minute and so we’ve got to keep our feet on the ground and stay focused on reaching Milan."

“I’m happy because I didn’t lose too much time with Yates in today’s stage. Today was perfect for him and then with Caruso who is second in the GC I just lost a few metres. On a bad day today, I lost almost nothing with second on the GC. I have some advantage with Yates, so I need to just arrive with some time in Milan. If I win the Giro with one second or two minutes, then it is the same.”

“Today was one of the hardest stages of this Giro," said Caruso. "The last hour and a half was really full gas, especially on the last climb it was super hard. Like I expected, Yates attacked, and he made a difference on the climb. But I felt good, and I kept my tempo until the finish, and in the end the gap was not so big.

“I couldn’t follow him, so in any case I didn’t have another option. I just had to keep my tempo and when I saw the maglia rosa suffer like my, my morale went up because it was hard for everyone in this moment.”

“I didn’t realise that he (Bernal) was dropped until a bit later," said Yates. "I was already going full gas so it’s not like I could have accelerated or tried to increase the gap. I just hope the weather stays like this. I think it’s quite obvious that every day it has been raining I’ve not had a good day. So, hopefully, the forecast will stay the same.

“We missed the breakaway and I wanted to have a go for the stage. By the time the breakaway had already gone it was only 60 or so kilometres before the first climb of the day, so it wasn’t a huge job. It wasn’t like we had to ride 200km on the front and burn off all the team. They did a great job so chapeau to them.”