Your ultimate guide to the World Cup final

History will be made this weekend when the star-studded French side take on the battle-hardened Croatians in the FIFA World Cup final. Who will claim the holy grail of football? 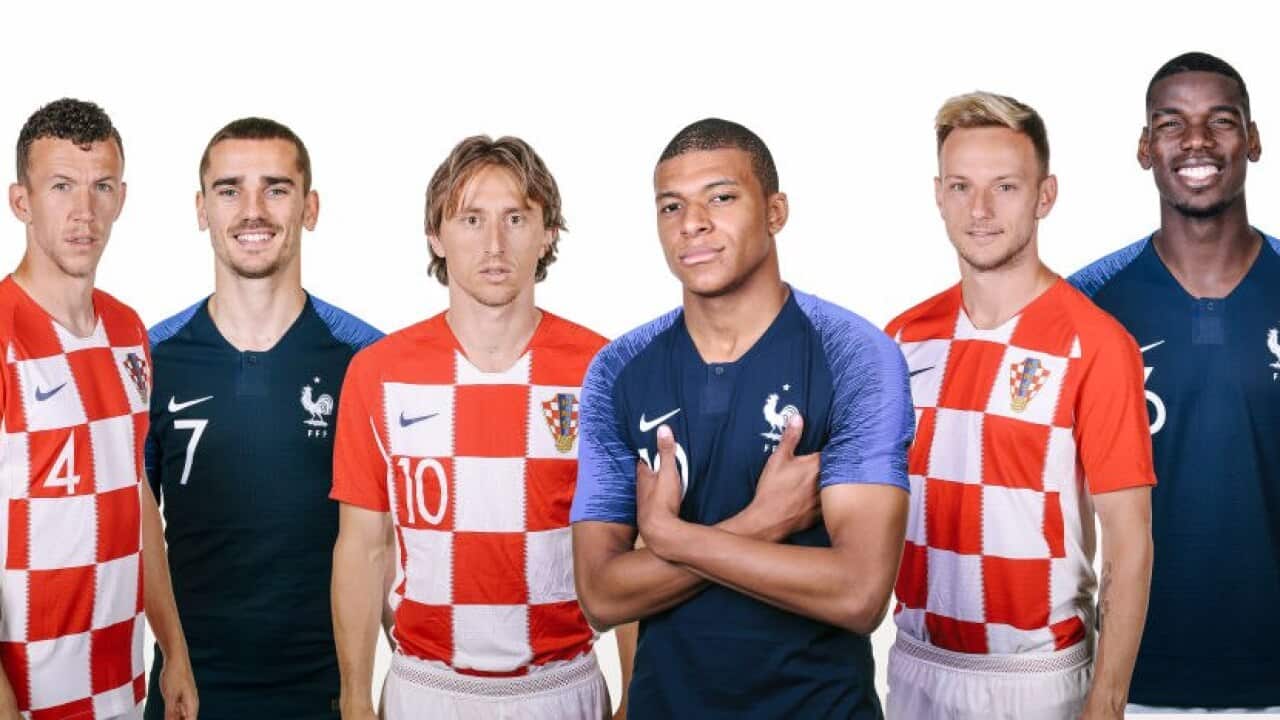 For all their pace, flair and exuberance, France have been taught to do just one thing: whatever it takes to win.

And now, after going the length of the tournament unbeaten with five wins from six matches, Didier Deschamps’ men are just one more away from World Cup immortality.

Les Bleus were last here in 2006, the famous fixture most known for Zinedine Zidane’s headbutt on Italy’s Marco Materazzi, and while victory eluded them that night in Berlin, they will hope Monday’s (AEST) final ends just as it did for them in 1998.

Should it do so, Deschamps would become only the third person to have won the World Cup as both a player and a head coach, and when assessing his side’s run in Russia, you’d be hard-pressed to say they don’t deserve it.

From their fortuitous win over the Socceroos, backs against the wall performance against Peru, all-out assault on Argentina and calculated defeat of Belgium, France have demonstrated a remarkable versatility that is yet to be matched.

Possessing the perfect balance of steel and skill across every area of the pitch, Deschamps' squad have flourished within his 4-3-3 formation, with Paris Saint-Germain forward Kylian Mbappe the primary example.

The 19-year-old is favourite to take out the Best Young Player award and will fancy his chances on the counter against a Croatian outfit coming off three successive 120-minute showings.

However, should Mbappe fail to fire, the likes of Paul Pogba and Antoine Griezmann will happily deliver the dagger blow.

France will likely field an unchanged line-up for the final and will rely on midfield duo N'Golo Kante and Blaise Matuidi to try and shackle both Luka Modric and Ivan Rakitic.

Should the pair dispossess Croatia's creative outlets, look for France to stretch the field primarily through Mbappe on the counter-attack.

And with target man Olivier Giroud certain to attract plenty of attention from centre-backs Domagoj Vida and Dejan Lovren, Griezmann's free role in the final third will be key.

Mbappe will once again be central to any French foray forward.

With pace, trickery and composure beyond his years, the livewire will back his chances against Ivan Strinic down Croatia's left-hand side.

And with three goals already in Russia, any lapse in concentration from Zlatko Dalic's men will be duly punished.

Twenty years on from the famous class of 1998, Croatia find a familiar foe standing between them and their first ever World Cup trophy.

The Vatreni, led by humble head coach Zlatko Dalic, have surpassed the semi-final feat that has long-hung over the nation on the international stage, and it is France, once again, who await.

A run in Russia built on heart, passion and a demand for respect has seen Croatia realise their potential at what is most likely the last realistic attempt for glory from their ‘Golden Generation’.

Alongside the likes of Ivan Rakitic, Ivan Perisic and Mario Mandzukic, captain Luka Modric has confirmed his status as one of the best players in the world with a portfolio of performances that leaves him within reach of the Golden Ball award.

Their routine tournament-opening win over Nigeria sprung to life with a memorable demolition of Argentina, before their sheer determination to succeed carried them through a gruelling knockout run featuring two penalty shootouts against Denmark and Russia, as well as a come-from-behind classic against England.

From the tip of Zagreb to the ends of the Adriatic, the hopes of a nation - amidst all the political tension and uncertainty - will cling to their national team, just as they did all those years ago.

Only this time, they aim to get the job done against France, and become the ninth nation to win world football’s number one prize.

Croatia's best chance of success will once again revolve around the time and space afforded to Modric and Rakitic.

Dalic will likely deploy Marcelo Brozovic in the centre of midfield and look for Modric to enter advanced positions with Perisic and Ante Rebic on either wing providing options to continue the threat.

However, Perisic will be required to track back in transition in order to help Ivan Strinic neutralise France's main attacking outlet, Kylian Mbappe.

Look for Modric to be the heartbeat of Croatia's attack, showcasing his elite passing through the middle and final thirds.

The 32-year-old has two goals and an assist thus far in Russia and, if given space, won't be afraid to try his luck from distance.

Should Croatia find fortune against France, expect their linchpin to be a significant reason why.