Striker Simone Zaza was Valencia's hero once again as he snatched victory in a five-goal thriller at Real Sociedad in which both sides were reduced to 10 men. 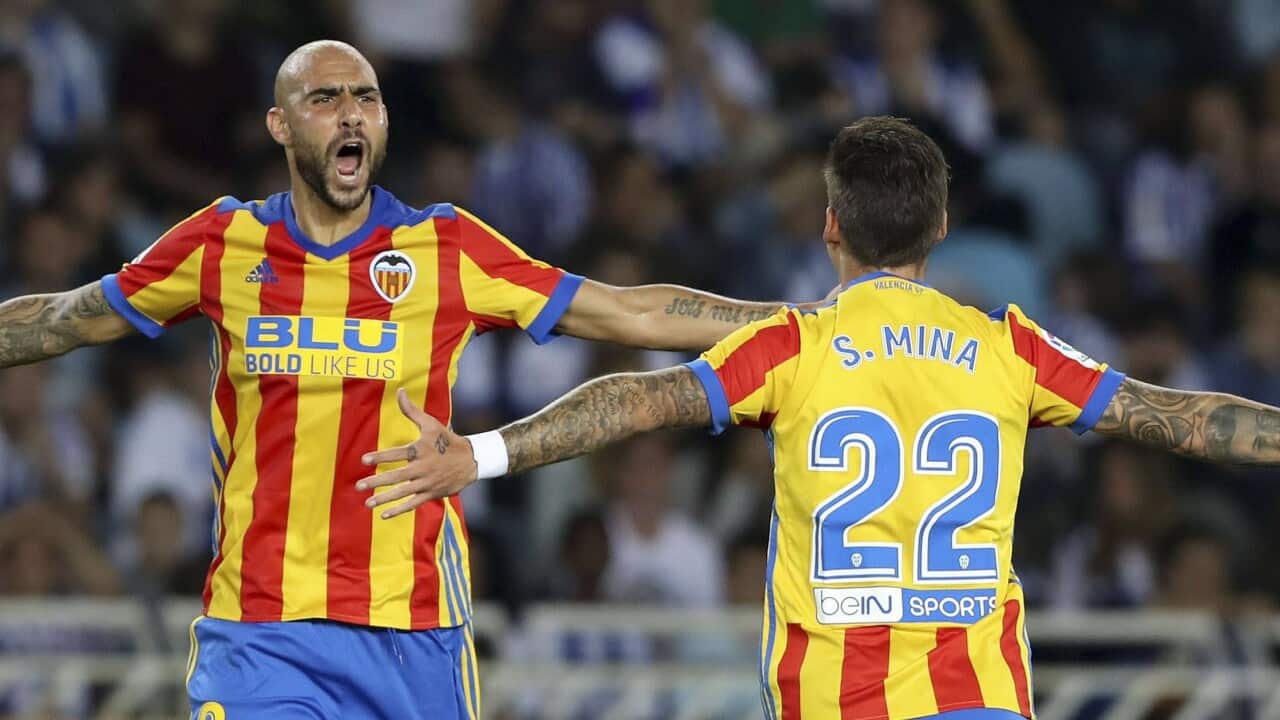 Zaza, who scored a hat-trick in last weekend's 5-0 demolition of Malaga, struck five minutes from time after Igor Zubeldia and Geoffrey Kondogbia had been dismissed to clinch a 3-2 win as the visitors produced a stunning display of counter-attacking football.

Ignacio Vidal rounded off a swift counter-attack with a cultured finish from Carlos Soler's perfectly-weighted pass to restore Valencia's lead 10 minutes after the restart, but once again, their celebrations were short-lived as Oyarzabal levelled within four minutes.

Advertisement
Real's hopes of victory were dealt a significant blow when Zubeldia, who had earlier been booked for a foul, attempted an overhead kick inside the Valencia penalty area and appeared to catch defender Jose Gaya in the face.

But referee Santiago Jaime swiftly evened things up when Kondogbia, who had also already been cautioned, felled Real substitute Adnan Januzaj with a clumsy challenge to miss out on a dramatic conclusion.

Angel Rodriguez set Getafe on the way to a first home win of the season as they thrashed Villarreal 4-0.

The frontman headed the home side into a 54th-minute lead before strike partner Jorge Molina made the most of defender Ruben Semedo's hesitancy to add a second 10 minutes later.

Markel Bergara forced in a third in the 67th minute after Mariano Barbosa had somehow kept out Juan Cala's close-range header and Angel claimed his second in stoppage-time to condemn Villarreal to a first defeat in five in all competitions.

There was a double too for Espanyol striker Gerard Moreno, although his contribution to a 4-1 home win over struggling Deportivo La Coruna came late on.

Leo Baptistao headed the Catalan side into a fifth-minute lead from Victor Sanchez's cross before Depor defender Alejandro Arribas turned a corner onto his own net.

The visitors pulled one back through Celso Borges eight minutes into the second half, but Gerard's 72nd-minute penalty and close-range finish at the death completed a comfortable win.

Pione Sisto was the architect as Celta Vigo romped to a first away win since April with a commanding display at Eibar.

The midfielder's 17th-minute free-kick was headed past goalkeeper Marko Dmitrovic by Gustavo Cabral, and it was 2-0 within six minutes when fellow central defender Sergi Gomez got the slightest of touches to another set-piece delivery.

Celta were cruising six minutes before the break when Pablo Hernandez volleyed home from another Sisto cross, and midfielder Daniel Wass cemented victory 18 minutes from time from Hugo Mallo's cut-back.

Leganes ended their three-match winless run with a 2-0 victory at Las Palmas.

Claudio Beauvue finished off a counter-attack two minutes into the second half before Javier Eraso wrapped up victory in the sixth minute of added time.