One is a highly skilful international fullback who can deliver the sweetest of crosses and the other is a combative forward who has been scoring goals since he joined the A-League. 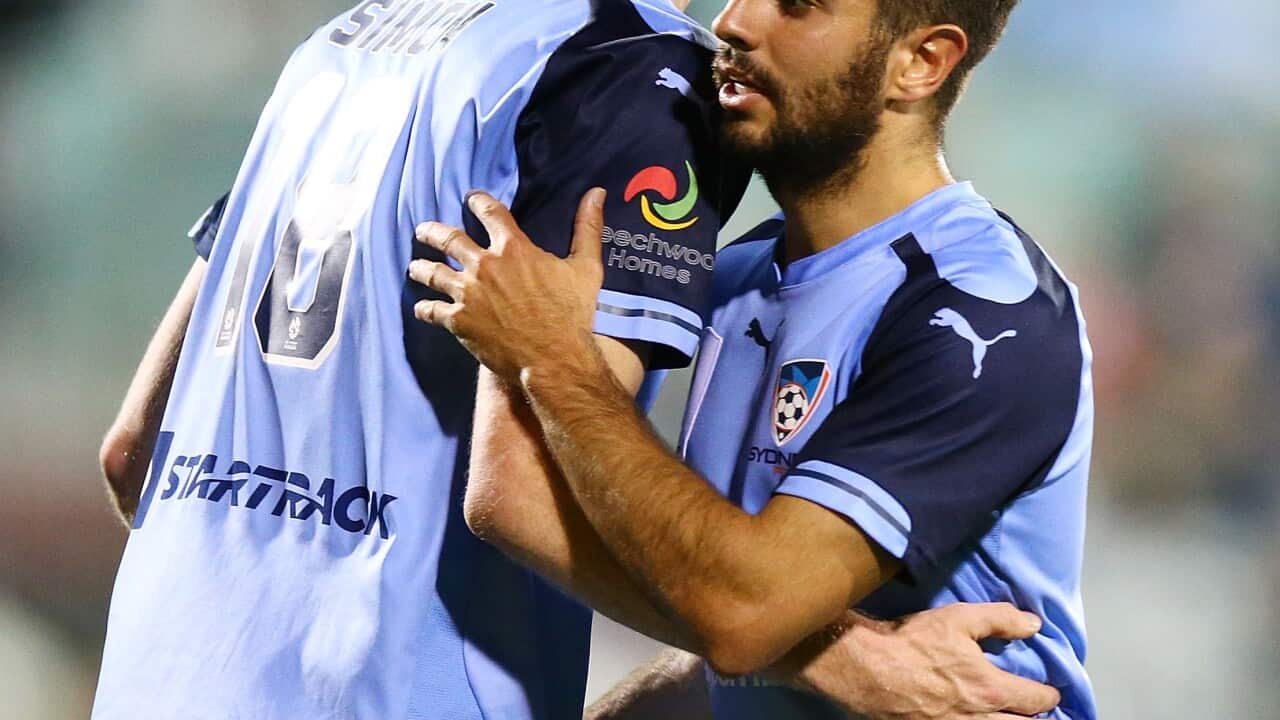 Michael Zullo and Matt Simon played key roles in Sydney FC's comfortable 3-0 win over Wollongong Wolves at WIN Stadium that gave the Sky Blues a spot in the last 16 of the FFA Cup.

Fullback Zullo left a positive impression on his competitive debut for Sydney, making many runs on the left flank, giving the team more width and providing a series of dangerous crosses.

Advertisement
It was his high centre that enabled Simon to break the deadlock by out-jumping goalkeeper Justin Pasfield for a trademark header.

Striker Simon crowned a typical, all-action game by scoring two well-taken goals - his second a delightfully struck shot with the outside of his right foot - that knocked the stuffing out of a resilient but outplayed Wolves side in front of a crowd of 8000.

The Sky Blues' next opponents are Perth Glory who caused a surprise by beating Brisbane Roar 2-0 at Ballymore.

Sky Blues coach Graham Arnold said "we could have made it easier for ourselves if we did not miss a penalty" but said he was generally pleased with the performance of the team although they had to wait till the 67th minute to open the scoring after Milos Ninkovic saw his poor penalty saved by Pasfield in the first half.

But he was glowing in his praise for Zullo and Simon.

"I thought Zullo was excellent," Arnold said of one of his new recruits' display.

"He showed the quality that he will bring to the team at left back.

Arnold knows Simon well from their days at Central Coast Mariners so the coach is familiar with the striker's ability to keep delivering and seal matches through sheer perseverance.

"I make no secret of the fact that I rate Simon as a wonderful team player," he said of the man who never gives anything less than 100 per cent.

"He's also a wonderful guy and he'll do whatever you ask him to do. He was excellent tonight.

"His record in the A-League shows that he has scored a goal in every three matches so it's not bad.

"But when we'll get back to full strength he knows his role."

Arnold said he was looking forward to the upcoming tie away to Perth, who reached the final of the first two FFA Cup competitions before losing to Adelaide United in 2014 and Melbourne Victory in 2015.

"We have to play everyone if we want to win the cup and Perth are no different," he said.

"We are going away on Sunday for a training camp and this will give us the opportunity to focus on the game and work on things.

"No doubt we will get footage of the win over Brisbane.

"Kenny Lowe has recruited well but it's early days. Sometimes the NPL teams are harder to play against at this stage of the season."