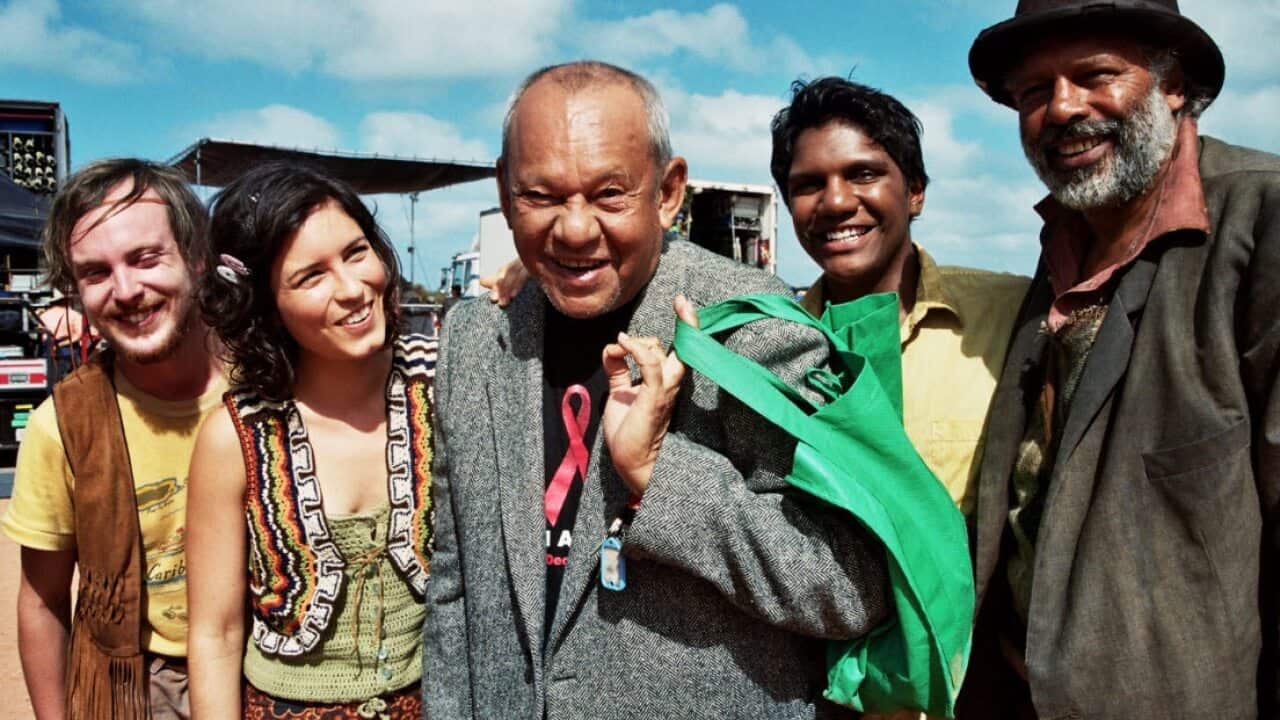 Chinese artist Zhou Xiaoping encountered a new group of friends 30 years ago while on a road trip through Western Australia, which led him to reveal a previously untold relationship between two of the oldest living cultures in the world.

Published 7 June 2022 at 3:28pm, updated 11 August 2022 at 8:41pm
By Helen Chen, Minyue Ding
Source: SBS
In 1989, while travelling around Broome in the Kimberley region in Western Australia, Chinese artist Zhou Xiaoping met an Indigenous musician named Jimmy, who had the Chinese family name of Chi.

Advertisement
“He told me [his grandfather John Chi] was from China,” Mr Zhou said.

As his journey continued, Mr Zhou said he met people from another Aboriginal community in Halls Creek, another town in the Kimberley region of Western Australia.

“I was excited because the shape of their faces had Asian characteristics,” he told SBS Chinese.

Since that time, he has been researching Australia’s Indigenous people with Chinese heritage.

Mr Zhou said he hadn’t realised that the trip would uncover such a vast and untold part of Australian history.

Research started with the story of a name

“My father is a Hakka and he came from a small island called Kat O Island in South China,” Mr Yu said at the “Our Story: Aboriginal Chinese People in Australia” project launch, “[and] my mother is a Yawuru woman.”

Professor Yu is a Yawuru man from Broome in the Kimberley region in north Western Australia. His Aboriginal family and Chinese family “…mix in the same household,” he said.

He said that in the history of Broome, “…there are many people like me with mixed heritage.”

“I don't know much about the overall history of Aboriginal Chinese Australians, but I am aware of my own history and others around me,” he said.

Professor Yu’s father was the first in his family to leave Kat O island, an island in Northeast Hong Kong, and become a worker in the building industry, he said. His father then ended up being a diver in Australia.

He said his mixed family had provided him with a pleasant and vivid childhood.

“[I remember] running on the beaches of Broome. We spent our time making spears [and] hunting fish in the mangroves in the native title zone,” he said.

His father's background also brought Chinese food to the family, he said.

“I think fusion happened in Broome long before anywhere else, I guarantee you that,” he said.

However, his father’s surname is Yau rather than Yu.

“[Because] my mother and father were not allowed to marry, but did marry eventually in the late 1970s,” Professor Yu explained, “…and they went to change our name at the clerk of the local courthouse, and the local bureaucrat could not spell ‘Yau’, so [they] just put ‘Yu’.”

The close but not completely accurate Chinese surname is not the only case in the Aboriginal Chinese community, according to Mr Zhou.

“Chi is not his [Jimmy Chi’s] surname, but the last character of his name,” Mr Zhou explained, who went to the local cemetery where Jimmy Chi was buried and found the Chinese characters on his headstone.

“The Australians at that time were very unfamiliar in recording these [surnames], especially when using the Chinese phonetic alphabet or pronouncing them,” he said.

“It can be a pity sometimes, and [the approximate surnames] were used over time.”

The discoveries prompted Mr Zhou to begin the “Our Story: Aboriginal Chinese People in Australia” research project and to uncover the previously untold family stories.

The project is in its 10th year and Mr Zhou said he believed the project was “…filling a gap in Australian history.”

Aboriginal Chinese people live all over in Australia, especially in Western Australia, Northern Territory, and Queensland, according to Mr Zhou.

The connection between Indigenous people and Chinese people can be traced back to the 1850s when Chinese people started arriving in Australia, as Dr Julia Martinez, associate professor in Humanities and Social Inquiry at the University of Wollongong, explained.

“…and it was considered a multifaceted relationship that included trading, sexual, and cultural relationships.”

“Many Aboriginal people in the northern part of Australia are very aware of the Chinese connections, through ancestries, culture and, in some cases, language.”

Both Dr Martinez and Dr Cahir joined the Our Story project as researchers.

“Darwin is a particularly important place in the relationship between Aboriginal people and the Chinese, where there were many families of mixed cultural background,” Dr Martinez said. She has researched the Aboriginal Chinese community in Darwin for 20 years.

Based on her study, she said “…the relationship has been really quite varied,” and sport was the key factor in Dr Martinez’s research for this project.

For example, she said it wasn’t widely known that the historic Darwin “Buffalos” Football Club was a joint Aboriginal Chinese initiative that actively sought “to engage in sport at a time when the White Australia Policy was trying to ban coloured sport”.

Aboriginal Chinese players were quite famous for being very good at football in the middle of the 1920s, Dr Martinez said.

“That’s why it’s always been famously [regarded as an] Aboriginal Chinese team,” she said.

John Ah Kit, the Northern Territory’s first Aboriginal cabinet minister, who was also Aboriginal Chinese and a member of the “Buffalos”, shared one of Dr Martinez’s research findings in parliament.

He said the team was part of sporting history and went to the heart of what made the Aboriginal Chinese community special in the ongoing fight against racism.

“The hidden relationship [between Aboriginal and Chinese] hasn’t been brought to light in the Australian consciousness,” Dr Cahir told SBS Chinese.

The Our Story project was considered groundbreaking in that it was the first historical research to challenge the inherent understanding of Australia and Chinese in Australia, he said.

Dr Martinez said she believed that people might realise that the Chinese were not immigrants in Australia but instead “…building a society and that they were here for generations” including forming deep relationships with Aboriginal people.

“We have seen some Chinese language has been adopted by Aboriginal languages,” he said.

Dr Martinez said the connection between the two communities was long-lasting given “…many Aboriginal Chinese families [are] generations and generations”.

“We find that lots of these families are actually now leaders in Darwin,” she said.

Mr Zhou said the Our Story project would last another four to five years with its findings eventually being showcased through exhibitions across Australia.

He said he had another ambitious plan -- to take the exhibition back to China, and “…find the ancestors and family connections back in China.”

“I think this part of the job is especially meaningful,” he said.

READ MORE
Without a vigil of their own, Hong Kongers join diaspora abroad to mark Tiananmen anniversary
'Last freedoms need to be upheld': Tiananmen Square vigils across Australia to show solidarity with Hong Kong
Complexity of Australian Chinese vote shift to the ALP in recent poll

What are the three levels of government in Australia?

What are marginal seats and why do they matter？

What is preferential voting?

Aboriginal Architecture is a Key to the Ancient Wisdom, History, and Culture