'A privilege to serve’: This is how Australian Sikhs are supporting bushfire relief

Many Sikh organisations in Australia have come forward to support bushfire relief across the country, serving free meals, providing groceries and medical supplies to the bushfire victims, firefighters and other relief workers.

Sikh organisations in Australia have come together to support relief works in the fire-ravaged areas of New South Wales and Victoria.

These efforts are most concentrated in Bairnsdale in East Gippsland, Wodonga & Wangaratta in North East Victoria and NSW’s South Coast.

Groups such as Australian Sikh Support, Australian Sikh Volunteers, United Sikhs, Khalsa Shaouni Plumpton, Turbans4 Australia, Care One Care All and the Sikh sangat [holy assembly] at various Gurdwaras across the nation have made notable contributions. A team of volunteers from the Australian Sikh Support have been involved in the relief efforts in North East Victoria.

Manpreet Singh Sapra of the ASS says a coordinated effort is needed to manage the ongoing donations of groceries and food items.

“I don’t want to be rude, but please you must check with the local people and authorities working at the front line before you collect and decide to carry grocery items to these areas,” says Mr Singh.

“We have strong messages from the local authorities who have now strictly urged people to stop sending items as they have other priorities than just sorting these huge piles of goods.” Mr Singh says they’re very thankful for the generosity shown by the people.

“There has been huge support from many Gurdwaras (Sikh Temples) and Indian restaurants that helped us conduct this seva (service). But we urge people that from now on they should make cash donations as this amount will eventually help rebuild lives affected by the ferocious bushfires.”

“The ASA collected an amount of over $12,000 with the support of Gurdwaras situated at Craigieburn, Blackburn, Shepparton, Keysborough and Tarneit. We thank everyone for their contribution.” Mr Singh also praised the efforts of Beechworth Indian restaurant and the Calcutta restaurant who he said provided free meals to be served at various relief centers.

“They have been very generous with their efforts. We are humbled to serve hot meals and pasta cooked at their facilities for a group of at least 125 people over this weekend,” he said.

It has been an honor and a privilege to serve our great nation. We follow the true Aussie spirit of help and mateship. May God bless Australia and its people.

Mr Singh says that another set of their volunteers is now providing free meals at a relief center near Albury.

“We are doing this service with the assistance from a local Indian restaurant,” he said. Another organisation, United Sikhs (US), has also been working in collaboration with the local authorities.

“Our volunteers are actively working in the field, not only to collect and distribute the goods but also to help sort these items at the local relief centers,” Gurwinder Singh of US told SBS Punjabi.

“So far we have distributed essential items worth $7,000 to the fire-affected communities. We hope to continue with our service for the next few days.”

Mr Singh says people should be careful while collecting goods or food items.

“There have been updated lists of what is required and what is not. Please don’t pile up and rather work according to the needs of the local authorities,” he urged. “We are working on the instructions by the local authorities. Our volunteers are providing food-services at three base camps in these areas and we hope to do these services for next a few days or until needed,” he said.

“A team of volunteers is serving at a temporary base established at Sandy creek reserve near a truck stop that is getting constant supplies of hay, second base is set near a convoy stop in Tallangatta and the third one is to help bushfire-affected people at Corryong." 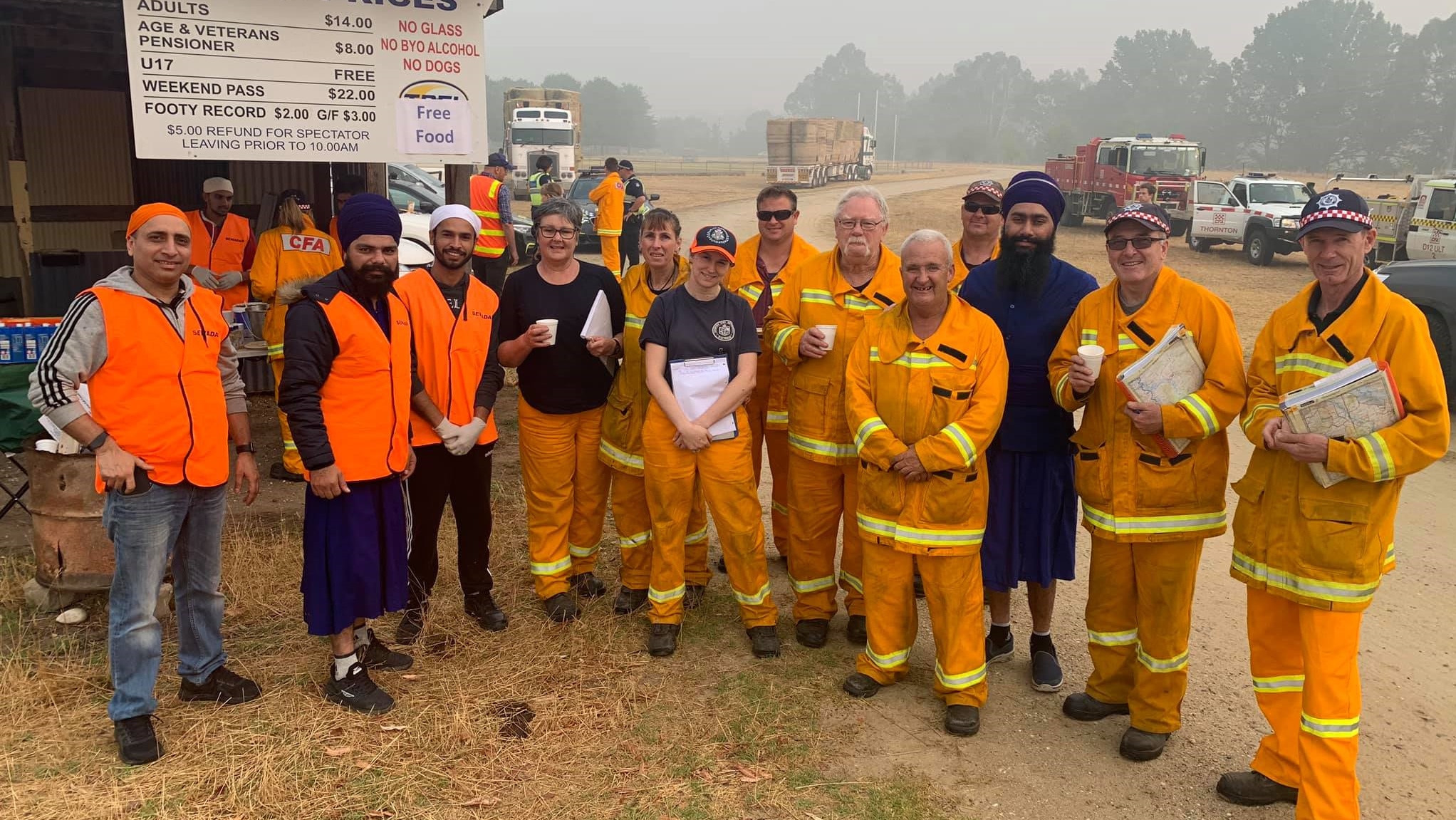 Amar Singh from Turbans 4 Australia said they have delivered bottled water and groceries of worth over $50,000 ever since the bushfire season started.

Most of these projects were done in collaboration with a Sydney-based community organisation Care One Care All.

“Our recent run was to deliver semi-trailer load of necessary items to the bushfire-affected communities in multiple locations in NSW,” he said.

“We thank our sponsors, volunteers and the very special people who supported us financially.” This campaign was run by Turbans 4 Australia and a Sydney-based community organisation Care One Care All.
Supplied

Mr Singh said their team plans to go to NSW’s South Coast again on Saturday to deliver another load of water and groceries.

“We are working in association with the local organisations who keep us informed about what is needed in the area, and hence these deliveries.”

A truckload of supplies gathered from the Sikh community of Canberra was delivered in fire-ravaged Cobargo yesterday.

Paramdeep Singh Nrain said this collection was initiated at a Canberra Sikh temple over the weekend.

“We would like to thank each and every individual who came out to donate despite such bad weather. We aim for another truckload of collection the coming Sunday,” he said. “We are now deciding whether we should deliver this amount to the local government or to any other organisation who have been working for the welfare of bushfire-affected families,” he said.

“We also have 23 pallets of water that have been donated by the Griffith Sikh Community.  It is a great community effort.” 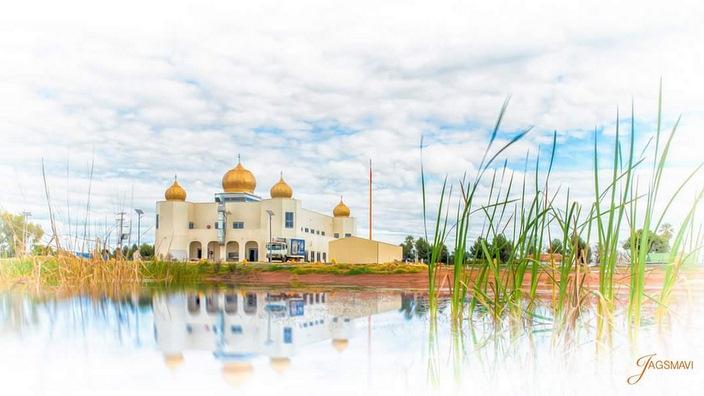 The Griffith Gurdwara - The Sikh place for worship.
Supplied

Sydney’s Glenwood Sikh Temple has collected around $17,000 to help the bushfire victims.

In a social media post, the Gurdwara has urged people to come forward and support the fire-stricken communities.

“If you are watching the bushfire crisis unfold with a sense of horror, we totally get it. It is easy to feel helpless, particularly if you are lucky enough not to be directly affected by the blazes," the Facebook post reads.

“But there are things you can do to make a difference. Sevadars (volunteers) at the Gurdwara Sahib tirelessly spent full weekend to collect $16, 899.20 from the Sangat.” 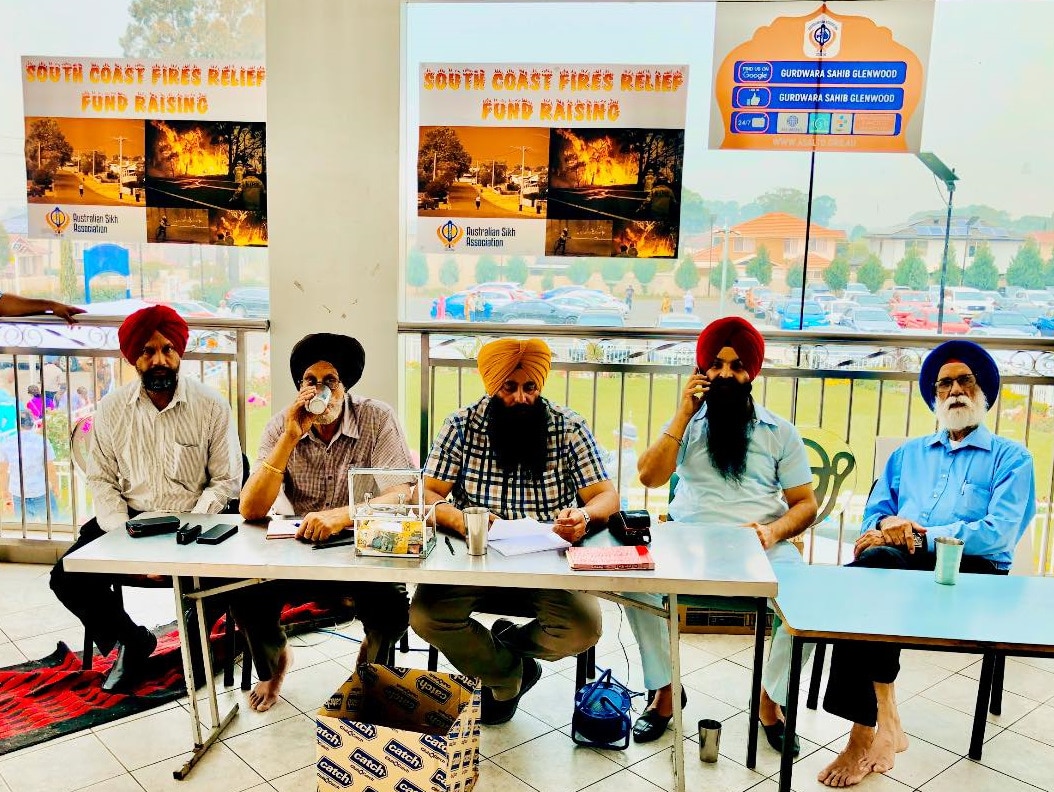 Previously, SBS Punjabi has also reported on the relief works initiated by the Australian Sikh Volunteers who served free food to the people affected by bushfire in East Gippsland in Victoria.