‘If you can’t help us, at least don’t harass us by asking for dates or sex’

Female international students in Australia seeking community help to tide over their financial crisis during the COVID-19 pandemic have been shocked when several men from the Indian community responded to their social media posts asking for ‘dates’, ‘massages’ and even sex. Some women’s groups have reached out to assist them, condemning the ‘predators’ who are ‘spoiling the name of the entire community’.

Pooja* arrived in Australia in 2019 as an international student, and soon thereafter, the coronavirus pandemic hit.

“I was jobless since March and started selling sanitisers from home to gather some money for my rent and fees. I posted on a social media group that I am an international student selling these goods to survive during this difficult time.”

“One man offered to pay half of my rent, if I would come over to his house. He said ‘let’s be friends with benefits’.

“Another man said he could help as long as there was ‘give and take’, and another said he was ‘looking for hookups’. One even said he was willing to pay me $150 if I gave him a massage for an hour.”

She says this was extremely upsetting, especially because of the volume of suggestive messages coming through.

“I never offered dates, sexual favours or massages in my Facebook post, so I felt horrible when I got so many vulgar messages. How many can you ignore?”

Men who think like this should simply go to brothels or massage parlours. They shouldn’t try to take advantage of someone else’s situation.

Pooja says this experience hurt her immensely, especially when one of the men called her an “international blackmailer” when she wouldn’t give in to his repeated demands for a massage.

“He must have contacted me five or six times and would say, ‘I’ll only buy sanitisers from you if you give me a massage’. He then had the audacity to call me an international blackmailer. I felt awful,” says Pooja.

She says she’s had similar experiences earlier as well and it galls her that men in their 30’s and 40’s, many of them married, send explicit messages knowing well that she’s only 19 years of age. And almost all of them are from the Indian community. “They are old enough for me to address them as ‘Uncle’. I had to block so many people for my social media page for my peace of mind,” she Pooja, adding “I don’t feel safe in the Indian community here.”

She acknowledges receiving help from some members of the Indian community and for the moment, she has enough money to pay for her rent for two months. But the experience of the past few months has left her feeling horrified and shattered.

“I was really frightened at first. I haven’t done anything wrong, that’s why it hurts so much. I haven’t even told my parents about it, because they’ll just worry.” But she has a message for those people who seek to take advantage of the situation that she and other international students find themselves in during the coronavirus pandemic when jobs are hard to come by.

“My message to these people is, if you can’t help, please just leave us alone. You have no right to ask for sex or solicit us for dates. Don’t take advantage of our situation.”

Sonia’s story: ‘I went to the Police station to make a complaint’

Sonia* came to Australia a year and a half ago as an international student and needed money to pay for the fees for her last semester, because an overseas transfer from another family member was delayed.

“My parents in India had already paid for my fees for three semesters and my cousin in Germany was meant to send money for the last one. But the payment couldn’t be arranged in time and I posted in Facebook for a short-term loan of $2,000.”

She says a Melbourne man of Indian origin responded that he was happy to transfer money directly into her account and would charge her $40 per month as interest. Sonia hesitated at first, but agreed to the arrangement after a week, since no other option was available and the deadline for university fee payment was looming.

“He asked for my address, which I gave him. When he came home, he initially wanted me to hand over one form of ID which he would keep as security. I offered him my Aadhar card, but soon he changed his mind and said, ‘I trust you’. Without taking the ID, he transferred $2,000 into my account.”

Soon after, Sonia says the man started sending her lewd and suggestive messages. “At first he asked, ‘are you interested in dating me?’ I didn’t respond to that. And then he wrote ‘ I’ am married, but my wife doesn’t like sex, can you help with this?’

Sonia said she was shocked at how blatant the message was, but it didn’t stop there. She says, his next message was, ‘If you’re not interested, please send your friend and I’ll pay $200 for every date.”

Shaken and upset, Sonia spoke to a woman who had helped her out in another situation and was advised to make a complaint at the local Police station.

“I made a police complaint, and the lady who was helping me posted a video on Facebook to call out this predatory behaviour.”

“The man came to know of that video, and then contacted me after a week to say he was depressed and didn’t mean the things he had written to me.” 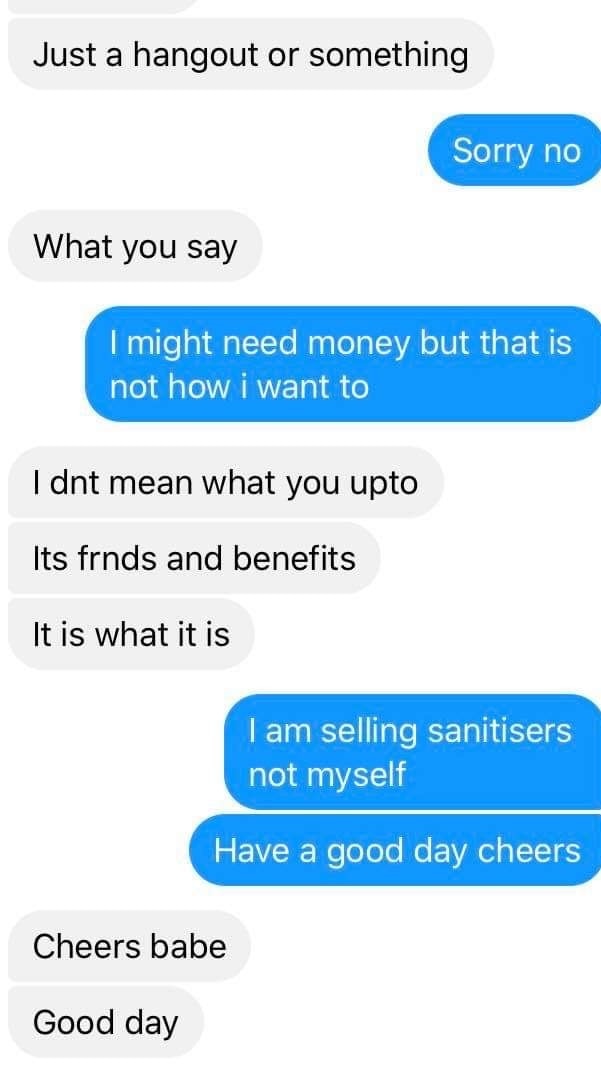 Sonia said the police advised her to return the money to the man as soon as possible, which she did,  but no action was taken against him since “I was safe and no physical harm had been caused.”

Although glad she is safe, the experience has completely shaken Sonia who now says she can’t trust anyone, especially in the Indian community.

“I can’t even explain how I felt when I got those messages.”

“I told my mother in India about it too, because I felt shattered. Soon my father called and said to me, ‘I’m proud that my daughter can take a stand like this and look after herself even though she’s alone in a foreign country’. That really gave me strength, and so did the people who helped me. That’s the only reason I can talk to you about this.”

She says even though organisations like Khalsa Aid and some individuals have been really helpful, she has largely lost faith in the Indian community.

“I can’t trust anyone at all. My experience tells me 99% of the people living here are untrustworthy. This is not a matter of a few bad people who do the wrong thing - a majority of the people are users.”

“I’m not your older brother, I want you to become my girlfriend’

Sonia says that she knows of other young female international students from India in a similar predicament.

“My own roommate has had the exact same experience, but she’s not willing to speak up. Even she had posted on social media seeking a job at the start of the COVID pandemic. Someone offered to help with groceries, even though he had no job vacancies to offer.” “She accepted his help and addressed him as ‘Veera’ (older brother). Within a week he messaged her to say ‘I’m not your Veera, I want you to become my girlfriend.’ And the thing is, he is married – he has a wife and children, and has all of their photos on his Facebook profile.”

Sonia encourages anyone on this predicament to come forward, and addressing those people who abuse people in need, she says, “You must think twice before doing that. Don’t spoil the name of the community.”

Pooja and Sonia have been assisted by some women’s groups in Melbourne and some well-intentioned people have also raised funds to help them through these difficult times.

SBS Punjabi will bring you interviews with Reena Rana and Shashi  Kanta Singh who have helped Pooja and Sonia, and some more young women in the same situation. Stay tuned to SBS Punjabi for their interviews.

* Please note: Pooja and Sonia are not their real names