Leonard Andy and the untold stories of Djiru people and Gunduy

Leonard Andy, a Djiru Traditional Owner of the Mission Beach area, is one of the artists whose works feature in the Girringun at Mission Arts exhibition which opened its doors this Wednesday January 22.

Girringun at Mission Arts features traditional and contemporary works by artists from the Girringun Aboriginal  Art Centre at Mission Beach.

The area, or Djiru country is critically important for Djiru people and Gunduy, the endangered cassowary, whose plight feature prominently in Leonard Andy’s work.

In an interview with NITV Radio Leonard Andy confided that he uses art as a vehicle to carry the story of Gunduy (cassowary) and the story of his people, the Djiru people, beyond his local area to Southern states and right across the globe.

He laments that no one seems to really care about the plight of Gunduy. Similarly, the true story of the Djiru people has been distorted beyond belief.

“Djiru country, what they call Mission Beach today it’s nice and pretty but it is hard because we know the real history of this place. There never was a mission, in the traditional sense at Mission Beach. It was called the Hull River Settlement,” Leonard Andy said.

Historical records depict this locality more as a penal or detention settlement than the idyllic tourist place it has become.

Leonard says there are only 7 Djiru Traditional Owners living on country as at the wake of the 20th century the majority of Djiru people were forcibly removed and relocated to Innisfail and as far afield as Palm Island.

“Today it is a bit hard for our people to relate to some of the areas when it comes to tourism. Because everybody wants to hear all the good stories, the happy stories. Except, our story isn’t a happy one for us.” 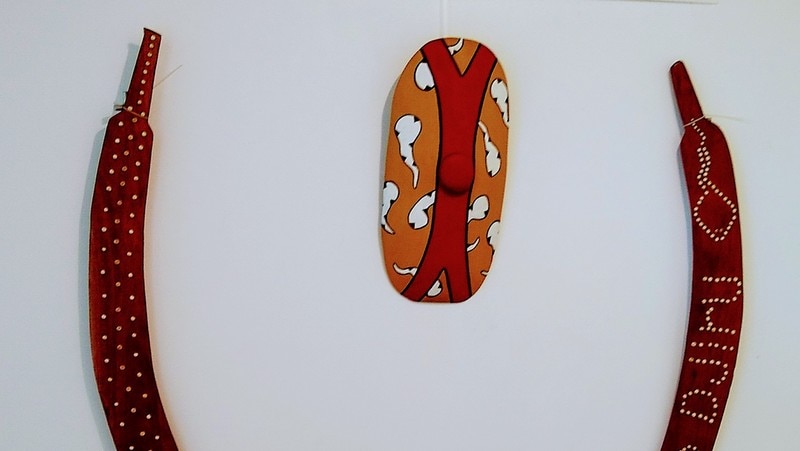 Leonard hopes that Girringun at Mission Arts Exhibition will educate people about his county, its unique history, cultures and peoples.

“All the Aboriginals are not the same. Here we are rain-forest and saltwater people but a lot of the focus today and a lot of the stereotypes and the history have built around dry country cultures. We, the rain-forest People, are only starting to get exposure now.”

The Djiru artist says unlike other Indigenous peoples of Australia rain-forest people used swords and shields as weapons. This is one of their unique untold characteristics.

He also mentions that he is one of the last artisans still making stone axes and wooden swords like his ancestors did for thousands of years before him.