In the second part of this two-part radio special, originally published in 2014, SBS Executive Producer Kumud Merani goes beyond the science to look at similarities in rock art, language and spirituality between India and Australia going back thousands of years. Click on the audio links to hear the story.

In Part One we looked at how the science of genetics has played a role in casting new light on our ancient ancestors.

In Part Two we look into the recent body of evidence pointing to deep links between prehistoric India and Australia; we go beyond the science and speak to the people who believe that Indian settlers who arrived on Australia some 4000 years ago, left behind more than just a trace of their DNA – in the art, languages and spiritual symbolism of indigenous Australia.

For many Australians, the dingo is a cultural icon. 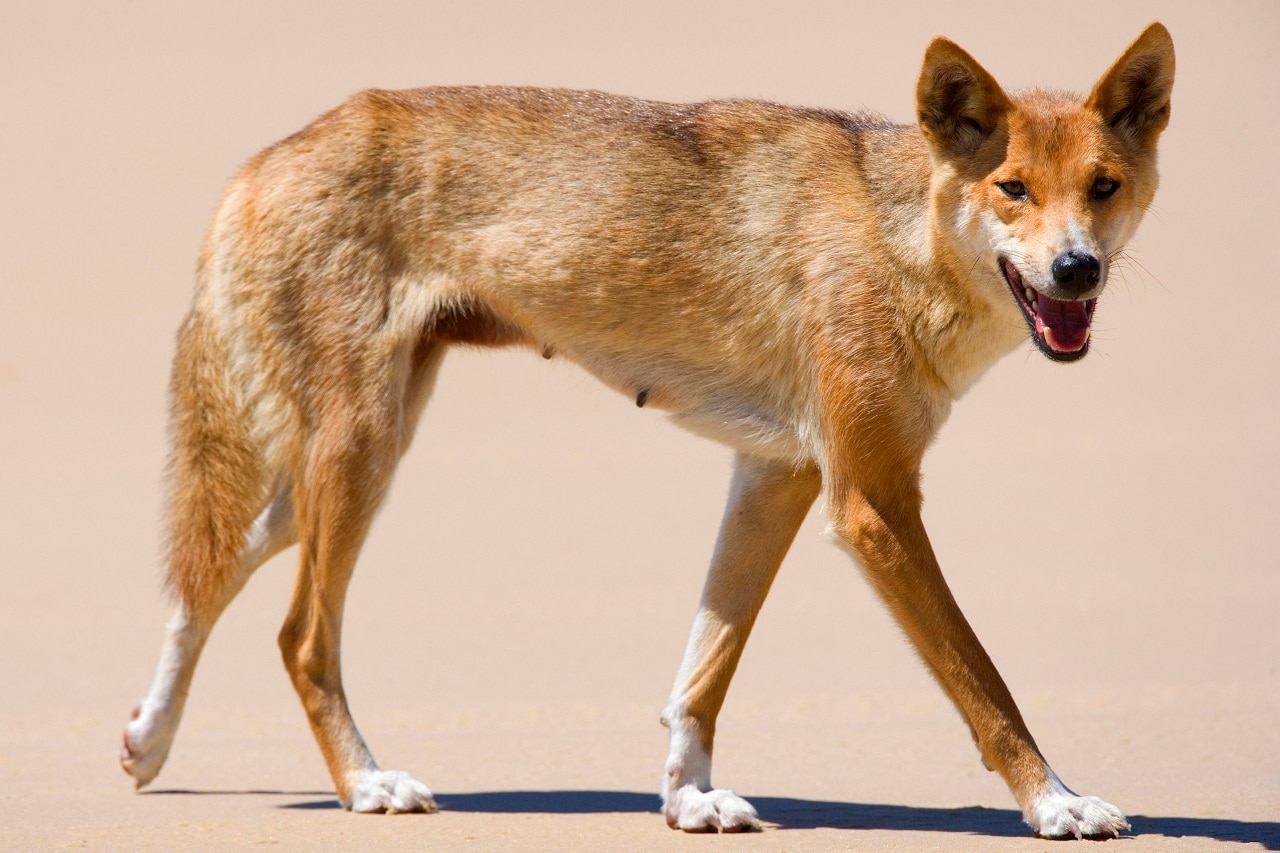 Dingoes have a prominent role in Aboriginal culture, featuring in stories, ceremonies and cave paintings.

Based on fossil remains - it’s long been assumed that the species was introduced from South East Asia – some 4,000 years ago. But before DNA was used, researchers weren’t sure of the animal’s exact lineage.

Bulu Imam, from the Indian National Trust for Art and Cultural Heritage at Hazaribagh in the Indian state of Jharkhand, has long believed in an Indian origin for the Dingo.

Bula believes that the dingo is the direct descendant of the Indian pariah which was taken by Indian hunters and gatherers to Australia 4,000 years ago.

According to Bulu, the close resemblance of the Dingo to Indian Santal hounds, known as Pariahs – points to a common ancestor. His theory has been supported in the last decade with DNA evidence suggesting a common origin from a single Southern East Asian gene pool for most ancient dog breeds, including the dingo, the New Guinea Singing dog and the Pariah.

“Obviously, it is a direct importation of the Asian Pariah into the Australian continent at a fairly recent date because the DNA tests that have come from the Royal Institute of Technology in Stockholm show that the Indian Pariah is the same dog as the Indo-Polynesian breed and at a more recent dating has  shown in China that the small Chinese wolf South of the Yangtze is the progenitor of the Asian Pariah.! DNA testing, which is conclusive evidence.” The Story Untold - The links between Australian Aboriginal and Indian tribes

Bula believes that the dingo is the direct descendant of the Indian pariah which was taken by Indian hunters and gatherers to Australia 4,000 years ago.

It’s not the only physical evidence he believes links prehistoric India to Australia.

"In Jharkhand, it is a very common symbol in the marriage of these tribes. It is also found in the Metho Chalcolithic Rock Art in many parts of India including Hazaribagh.

"I believe the motif originated in Australia first by people who had the seen the Southern Star formation which is visible only in the Southern Hemisphere. This was 40,000 years ago... the cross in the circle, well, then I believe there could have been cultural migration of the symbols into India during several periods. It’s not just 2,000 years ago that there was contact between India and Australia because we have to consider it in the context of the Anthropological and Archaeological evidence, that there was a proto Australoid migration out of Australia, which has come in parts to India."

Indians in Australia are also focussing on shared spiritual symbols

Prem Mishra, a Hindu scholar with the Sri Mukti Gupteshwar Mandir Society in Sydney says Indian scriptures from the first and second millennium BC refer to Australia as the “Shaka Dweep” and describe the inhabitants as well…

"If you study the Shiv Shatra Rudra Samhita which is also part of the Shiv Puran,* there is also a very vivid description of Australia with various names like Astalid, Ashtalika. So quite a few names have been appearing in our ancient scriptures.”

Prem Mishra interprets the scriptures to mean that Indians at that time knew about the great Southern continent – and considered Aboriginal Australians as part of their cultural world.

In the Hindu scriptures the Aborigines or the Adivasis of Australia have been very specifically defined as the Vedic (Hindu) people,” he says.

“So the question comes why Vedic people? There is a very strong reason in that. In ancient times Vedic people used to worship three main aspects, that is Mother Earth and they used to worship the snake and also the fire. And the Aborigines of Australia are also worshippers of Mother Earth, the snake and in fact, the rainbow serpent theory is the mythical snake which links the mother Earth to heaven- that’s their belief!" 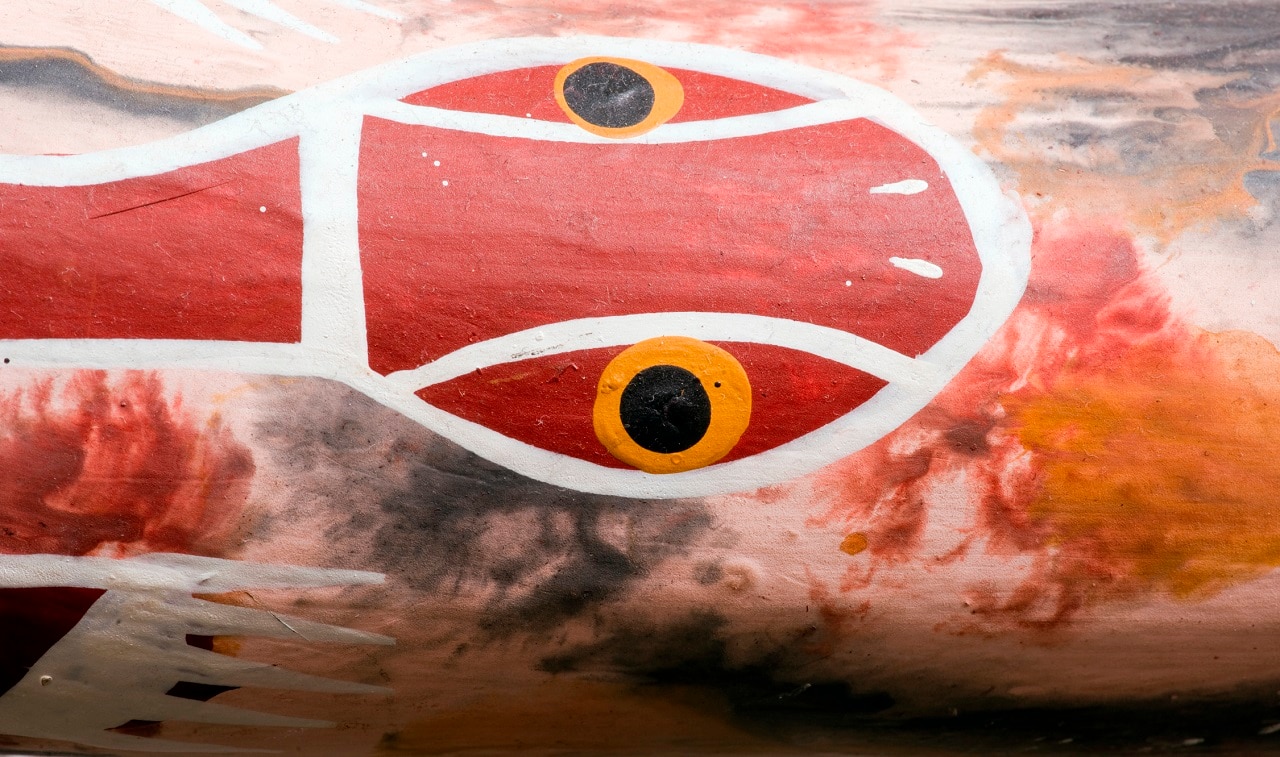 Australia, View Of Digeridoo Aboriginal Musical Instrument
Getty
According to Vedic Hindi beliefs, the tail of the mythical snake is thought to protrude at the North pole and its head is wrapped around the Australian continent.

"That mythical snake that protects us from being destroyed on this planet,” he says.,

“Its main part is positioned around Australia, so that’s how its spirituality is described in our ancient scriptures. And that rainbow snake which is described as the Rainbow Serpent is worshipped by Aborigines as well.” 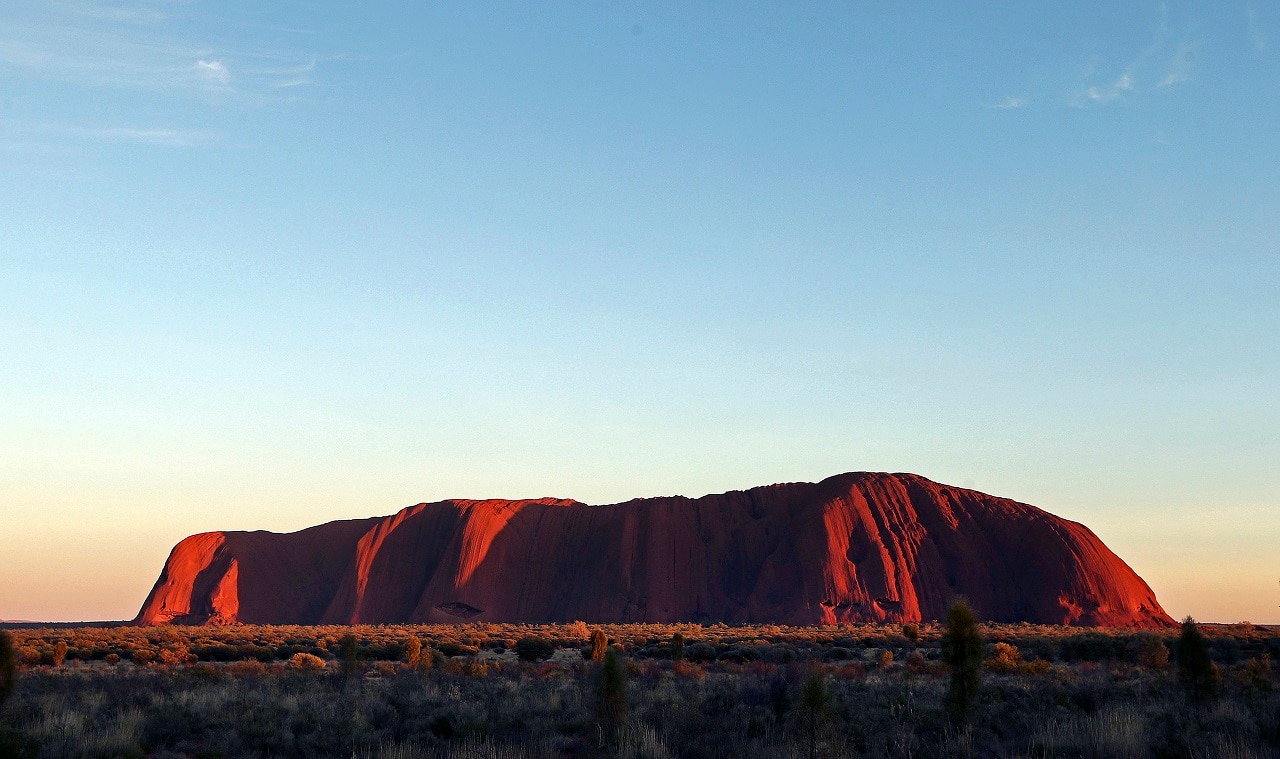 The sun rises over Uluru, Australia.
AAP
Prem Mishra also believes that the great Australian landmark – Uluru - is referred to in ancient scriptures as the “Ganapati Shila’’.

Ganesha or Ganapati is the Elephant-headed God whom Hindus worship as the remover of all obstacles.

Viewed at a certain angle he says Uluru looks like a mighty elephant at rest. He also points out that the ancient Indian word “Uru” means a high or important place.

But if Australia has left its mark on India - are there traces of India in the cultures and symbols of Australia?

“Many years ago we’d noticed on one of the islands, the older people were going towards a water hole, they would sing out before they got there and  just say look we are coming down, we are not going to be injuring you and they’d make peace with the water before they went to it. I was very surprised when the first time I heard it because the people did not know I was in the vicinity and they were just going towards the water and they were offering peace and in return would get cleansed."

Aboriginal Australian and Archaeologist, Mark Dugay-Grist is from Western Victoria. He says Dreamtime stories and other oral traditions of the Aboriginal communities do tell tales of people from faraway lands coming to their country. It’s not just in stories -  Bulu Imam, at the Indian National Trust for Art and Cultural Heritage, believes the ancient Indians have left footprints in indigenous Australian languages.

"I have done a lot of study on the comparison of languages and I’m not surprised that hundreds and hundreds of root words are more or less exactly the same… unchanged! Now whether that is due to a Palaeolithic root or whether it is due to a contact in maybe in the deep past 10,000 years ago, 5,000 years ago, 2,000 years ago! that will need a lot of deep study done.

Ku Ku Kurri dances of Australia! Well, we have the Koori dances here too, they are done the same way, you put your arm around the companion’s waist and then people get into a line and they jump and sing around the fire.”

Using Margaret Sharpe’s Macquarie – “Aboriginal words’’ Bulu has documented many similar words in the Bundjalung language spoken in the Northern Rivers area of NSW and the language of the Birhors, which is spoken by a little known jungle tribe of Chota Nagpur in India.

The word “naked” in Birhori is “nunga” – it’s the same in Bundjulung.

The word for “woman” is “Kuri” in both languages.

Even basic vocabulary is the same. “Father” in Bundjalung is “Baban” and in Birhori it is “Baba”.

Bulu believes that these words could share a common origin.

Did the peoples from Southern Indian arrive in the glaring heat of the Australian summer when the sun was at its zenith and the wombats and possums were fast asleep?

Did the kookaburras laugh when they chanced upon this land? Or did they sail along the coastlines and arrive on a moonlit winter night as the skies above were ablaze with the Southern Cross?

In the first part of this report, we looked at the DNA evidence that points to an influx of peoples from southern India to Australia.

There’s still a lot of research to be done

That’s the opinion of Senior Research Fellow at the University of Sydney, geneticist Nitin Saksena, who’s advocating for more research across borders.

"This admixture needs sort of more support of the Aboriginal population and also the restrictions we have in India with the tribal populations adopting genetic material- I think it has to be a global co-operation if we ever want to study the secrets of the ancient people from both lands.”

He thinks that more needs to be done to convince the Australian Aboriginal  community that DNA research deserves their help:

"I think my people in the future will be more comfortable with the Genotyping and the DNA as there is already a shift in that and I think the quicker we get involved in this gift, as I see it- thinking out loud- Aboriginal people when we deal with blood and hair and even mucus things like that it’s a very spiritual thing. So I would hope my people would get on board with DNA in the future."

Bulu Imam, at the Indian National Trust for Art and Cultural Heritage, believes that now the genetic and historic connections have been made – the link between India and Australia’s indigenous cultures will flourish.

“Of course I’ve had a very privileged interaction with Australian Aboriginal artists and their work, and what I’d like to say is when we went (to Australia) in 2000 and I took six women artists from India who interacted with aboriginal artists in Sydney, there was an immediate electric unification you could say between the two, as if people of a common ancestry had met… like as if some blood connection, some psychological unity immediately!

“There was this understanding that the two people were not different!

"Again I say, was this due to contact or was it contact in the past or was it due to a common genetic ancestry! It is all these things put together. It is not any one of them.”

Music in the audio feature composed by Amit Diwadkar.