"This will provide sufficient additional time for all current and former Skilled Regional Provisional visa holders to make travel arrangements to start or resume living and working in regional Australia," Mr Hawke said in a statement. The federal government expects to assist about 10,000 skilled regional workers. Mr Hawke said holders of Temporary Graduate (subclass 485) visas stuck outside Australia can re-enter the country from 18 February and apply for a further stay.

"Visas will be extended for graduates who were outside of Australia at any time between 1 February 2020 and 14 December 2021, while they held a valid Temporary Graduate visa," he said.

"The extension will take effect on 18 February 2022, and visa holders will be notified directly by the Department of Home Affairs of the extension of their visa and may arrive after this occurs, from 18 February onwards.

"These changes support the return to Australia of temporary graduates as soon as possible, ahead of further planned changes on 1 July 2022 that will provide a further visa extension option to former graduates."

"It's a great relief. We had been waiting for this news for a long-time," Mr Saroya told SBS Hindi from his hometown in Punjab's Hoshiarpur district.

"We (his wife) both had saved work leave when we travelled to India for a month. We paid rent of our Sydney house from India for a few months the hope restrictions would be over soon. We suffered a huge loss," Mr Saroya said.

The family couldn't return to Australia following the international travel restrictions in mid-March 2020, and their visa expired nine months later in December. Melbourne-resident Manpreet Singh, who is currently on subclass 485 visa, however is requesting the federal government to provide more clarity.

"I am not sure what will happen in my case as my visa expires on 8 February. Will the government treat us on par with other 485 visa holders, put us on a bridging visa, or give us a replacement visa?" Mr Singh, who arrived from India on 23 December, told SBS Hindi.

"Also, not sure how the government will treat the case of my wife and our newly-born. They have already applied for a dependent visa from India," Mr Singh said. 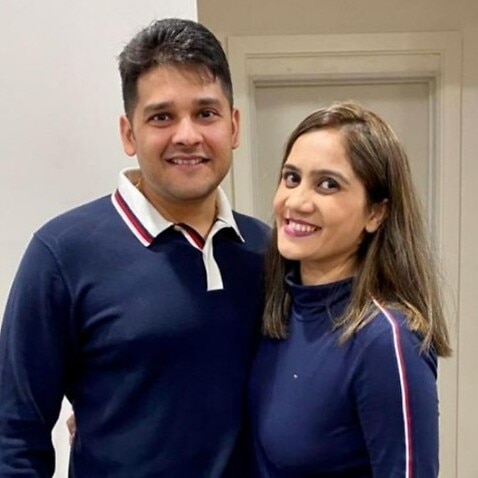 On Wednesday, Prime Minister Scott Morrison announced a rebate in visa fees for international students and holidaymakers arriving in the country from 19 January.

"What we'll be doing is we will be rebating the visa application fees from all those who arrive today," he told reporters in Canberra.