Extending support to hundreds of Temporary Graduate visa holders (subclass 485) stranded overseas, the Australian government has announced that those unable to travel due to COVID-induced restrictions will be able to apply for a replacement visa. The government will also increase the length of stay on 485 visas from two to three years.

Bringing respite to current and former Temporary Graduate (subclass 485) visa holders whose visas expired on or after 1 February 2020, the government on Thursday announced that all those impacted will be able to reapply for new subclass 485 visas of the same duration as their original visa. Government to increase the length of stay on 485 visas

In yet another significant decision, the government will also increase the length of stay on the 485 visas from the current two to three years for Masters by coursework graduates, matching that of Masters by research graduates. Announcing the decision, Minister for Education and Youth Alan Tudge said the announcement would accelerate the COVID-19 recovery process for the 2022 academic year.

"This will help ensure the rapid return of international students," Minister Tudge said in a press release.

"It provides clear incentives for institutions and students and ensures students are not disadvantaged from being prevented from coming to Australia earlier," he added.

Ram Krishna, who has been stuck in Hyderabad in southern India ever since the borders closed to temporary visa holders in March 2020, told SBS Punjabi that he could not hold back his "happy tears".

"I am thrilled at the news that they have created a special pathway for people like me who have been waiting for their turn to return to their lives in Australia," the 27-year-old engineering student said. 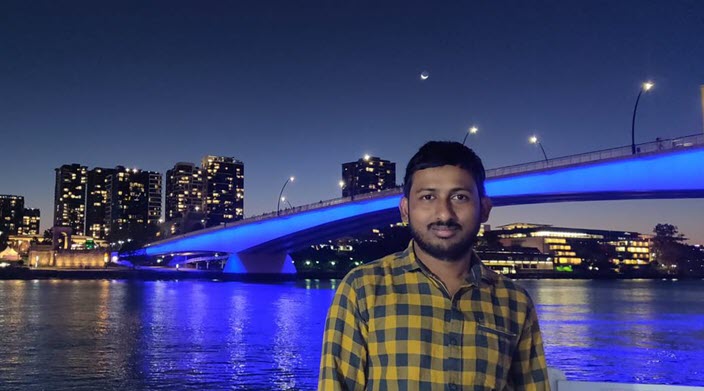 Ram Krishna has been stuck in India since March 2020.
Supplied by Ram Krishna

Mr Krishna, whose 485 visa expired in September, said the announcement means he can finally fulfil his Australian dream that he has nurtured since a very young age.

"I can now return and live my dream of making a future in Australia," he added.

Decoding the new visa settings, Melbourne-based migration agent Ranbir Singh said these are arguably the most notable positive changes since the start of the COVID-19 pandemic.

“The major changes mean eligible Temporary Graduate visa holders stuck overseas will be able to apply for another graduate visa which will be granted for the same period as their initial visa.

“In addition, the length of graduate visa for Masters by coursework graduates will be increased from two to three years and for graduates of vocational courses it will be granted for two years instead of the current 18 months,” he clarified.

Mr Singh said the extension will open up more avenues for international students, depending on their studies, it will give them the much-needed extra six to twelve months to look for more options under skilled migration.

'We have won the battle' As the name suggests, visa subclass 485 is for international students who have completed two years of study in Australia. Depending on the applicant's situation, it can last between 18 months and four years and allows successful applicants to live, work and study in Australia temporarily.

Until today, those stuck offshore on 485 visas could not extend, freeze or reapply for the visa.

Paramjot Singh is one of the nearly 14,000 temporary graduate visa holders who remain stuck in India.

The 26-year-old, who travelled to India during the early days of the pandemic, would have seen his two-year visa run out in December, but said he can now breathe a sigh of relief.

We have won the battle

"My family and I are ecstatic. A happy face has replaced the tense one - this is the most beautiful feeling ever. I came to India for 21 days but have been stuck here for 21 months. It has taken us many months to attain this extension. I want to thank everyone who has helped us during our times of crisis," Mr Singh said. Greens Senator and immigration spokesperson Nick McKim, who raised the plight of existing and former 485 visa holders multiple times in the Senate over the past 18 months, said the announcement is a great reward for patience and a long community campaign.

"This has been an extremely long time coming and will be a welcome relief for tens of thousands of people who were stuck overseas because of the pandemic.

"Their lives have been on hold for close to two years, and it's great that they can begin to plan their future again," Senator McKim said.

He added that the replacement visas should be granted "free of charge" to the affected visa holders to compensate for the inconvenience they have endured during the last two years.

Ravi Lochan Singh, president of the Association of Australian Education Representatives in India, said the government's decision to provide a year-long extension to 485 visa holders would put Australia on par with global academic destinations like Canada and New Zealand that offer a three-year post-study work visa.

"This announcement is a major game-changer. It will increase the attraction quotient for regional areas and attract more students to Sydney, Melbourne, and Brisbane in times to come.

"The fact that the extension would be provided to all international students who have completed their degrees irrespective of their location is likely to accelerate the rate of return of students to Australia now that the borders have reopened," he added.