The Australian Embassy in Kathmandu says it's trying to negotiate a commercial flight from the Nepali capital to Sydney and is urging Australians across the country to head back to the capital amid worldwide travel disruptions caused by the coronavirus.

Australian tourists currently stranded in Nepal, after the country went to lockdown to stop the spread of Covid-19, are urging the Australian government to help them get back home.

There are currently around 200 Australians stuck in the country - they're among the thousands of Australians seeking government support worldwide.

Rachel Fletcher was on top of Kyanjin Ri, a 4,774-metre high mountain in central Nepal when she found out that she may be stranded in the country amid government actions to control the spread of COVID-19. Ms Fletcher, her guide, and porter had been trekking in the Langtang region and had no telephone reception.

On the morning of March 21, they were told Nepal had cancelled all flights from 22-31 March.

Ms Fletcher and her team rushed down the mountain to Syafru Besi, the nearest place where they could get a vehicle from.

By the time they drove back to Kathmandu on 24 March, Nepal had entered into a lockdown.

After many negotiations, she reached the capital but the district checkpoint would not allow her car to pass.

They were forced to walk almost 13 kilometres back to the tourist hub of Thamel in Kathmandu.

She is now at a hotel in Thamel which has offered her accommodation and water but is not serving meals anymore. Ms Fletcher at her hotel in Kathmandu
Supplied

"I know they are keeping the hotel just so that I have a place to be, and I appreciate it," Ms Fletcher told SBS Nepali.

"But it's a struggle to get food as most of the restaurants are closed, and the lockdown may force others to close too."

While many tourists are worried about food and money, they remain hopeful that the Australian government will take steps to get them home soon. More than 30,000 Australians visit Nepal every year, many of them trekkers who walk up Nepal's high mountains. Most tourists come during the two favourable trekking seasons. The spring climbing season, that starts from March until May was just beginning, when coronavirus started spreading rapidly.

Many tourists had left the country when it became clear that travel could be restricted due to the virus.

Others, however, made a last-minute dash for the airport but failed to get out.

Paul Ashenden and his group of eight Australian friends were among them.

They had flights booked for the end of March but booked another one for 24 March, the day the lockdown began. They reached the airport at 5 am before the lockdown began at 6 am, but were not allowed into the airport.

Their flight was cancelled, too.

Stranded at the airport in the middle of a lockdown, they posted about their situation on social media and were provided assistance by the Australian Embassy.

"We booked flight after flight in a bid to get out, and each of them was cancelled," Paul Ashenden told SBS Nepali. 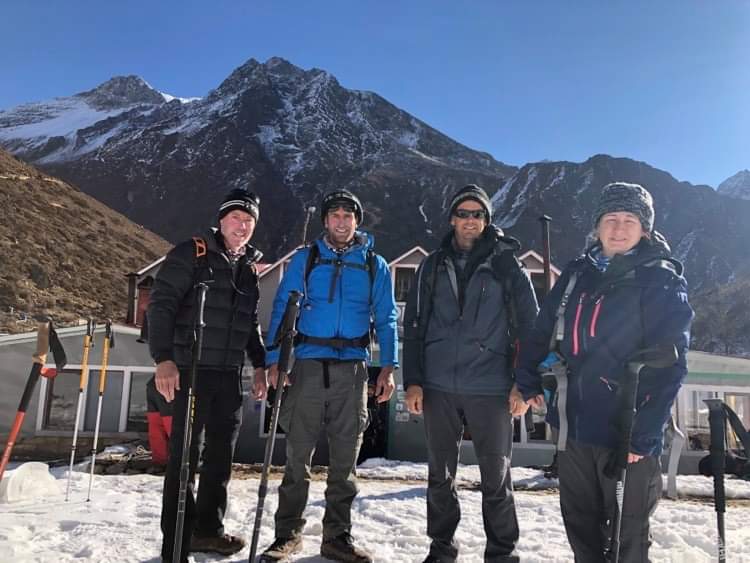 Tony Symons, Ryan Coz, Brook and Jody Hutton are amongst those Australians who are stranded in the Himalayan Nation.
Supplied

"Many of us had to max out our credit cards, we haven't got refunds yet. We are worried about running out of money while we stay here for an indefinite time."

Now they are biding their time at another hotel in Thamel until they're able to fly out.

'Yoga instructor stranded among us'

Most of the tourists stranded in different hotels of Thamel have not been able to venture out, and say the usually bustling tourist spot feels like a ghost town.

Some tourists, like Harry Bevis and his British partner, Frances, are trying at least to get some exercise.

"Our hotel has a lot of outdoor space, so we don't necessarily need to go out on the streets. There is a yoga instructor stranded among us. We are trying to organize some classes and figure out other activities so that we have something to do while we wait," said Bevis. Harry and Frances atop Poon Hill in Nepal.
Supplied

The most worried are those who are stuck outside Kathmandu.

Jordan Gradden had flown to Lukla with his father for a trek to Everest Base Camp, where they remain stranded.

"We found out when we were in Gokyo on 18 March that restrictions were occurring after our Malaysia Airways flights were cancelled. We tried rebooking with Singapore Airways and decided to walk back to Lukla as quickly as possible but it was a 4-day walk. We couldn’t utilise helicopters because of the cost and weather," Jordan said. On 25 March Nepal government did evacuate some stranded travellers.

Many in Pokhara and other spots drove and flew back to Kathmandu, however, Lukla, the entry point to the Everest area, is high up in the mountains and notoriously difficult to fly into.

It is often listed among world's most dangerous airports, and as of 26 March, there have been no rescue flights there.

The Australian Embassy says it's working to fly the stranded tourists out.

The Australian Embassy has just secured approvals to fly 14 stranded Australians out of Lukla. Weather permitting, they should land in #Kathmandu tomorrow. We are now working on authorisations for a second flight.https://t.co/qgeLafN978 pic.twitter.com/IxIfFydu97

(Update 1700 AEST: Gradden and other Australians stuck in Lukla made it back to Kathmandu on 27 March on rescue flights)

Meanwhile, many Nepalis in the travel and tourism industry have volunteered to help such stranded tourists.

At Lukla for example, the Pasang Lhamu rural municipality and Hotel Association have banded together to provide free food and lodging to stranded tourists.

"The municipalities will pay for their breakfast, lunch and dinner, and the hotels will provide free lodging and wifi for as long as needed," Ang Phurba Sherpa, chairperson of Ward 2 of the municipality said.

"We have 137 tourists stuck in Lukla, and many of them were on a tight budget and concerned about money, so we decided to help."

Elsewhere in the touristic town of Pokhara, some restaurants are offering free food to travellers.

A local restaurant is currently offering one free meal a day to anyone who needs it.

"On the first day we had 58 travellers, and the next day we had 76," says the proprietor Dorje Lama.

"During this crisis, I can go home and eat but the travellers cannot, so I wanted to do what I could to help them. We are all human after all, and we all need to eat." At both places the staff are following stringent procedures, wearing gloves and masks and providing soap and water to guests to wash hands.

Lama even does not allow dine-in and only provides simple takeaways of dal bhat tarkari and salad.

They also say that they respect the lockdown and will close their services if they have to, but are motivated by humanity to do their best.

Australians concerned about Nepalis too Nepali Sherpas, who work as mountain guides, gather at the Seven Summit Trekking office after in Kathmandu, Nepal
EPA/NARENDRA SHRESTHA via AAP

The Australians in Nepal speak warmly of the help offered by Nepalis – one guide even offered to feed the travellers if they had to stay for a long time in Nepal – but mostly, they are concerned about what coronavirus means for Nepal.

"More than anything, I fear the impact of the virus situation on the livelihoods of people here in Nepal, especially those living hand to mouth," says Sheilin Teo, an Australian citizen who has lived in Nepal for three years and is now looking to relocate to Australia.

She had booked her flights for April but is stranded along with the seasonal trekkers.

The Australian Embassy is trying to negotiate a commercial flight from Kathmandu to Sydney. If successful, there may be little advance notice. We urge all Australians to make their way to Kathmandu as quickly as possible.
Further updates will be posted on https://t.co/WEcqI3DEmF pic.twitter.com/ChGhpEJJEh