SBS Bangla EXCLUSIVE: Vulnerable refugees in Australia are being scammed by fake visas as they attempt to return to visit relatives in Bangladesh. A police investigation is underway amid claims by victims that a Bangladesh High Commission employee Canberra was linked to the issuing of visas.

Faruk* has been living in Australia as a Rohingya refugee for the past six years, but his mother along with his two children and his wife remain in a refugee camp in Cox’s Bazar in Bangladesh.

He travelled to Dhaka on 19th December 2018 in order to visit his family, on what he thought was a tourist visa for Bangladesh, obtained in Australia.

However, he was detained by Bangladesh Immigration Police at Hazrat Shahajalal International Airport on suspicion of travelling on an invalid/ fake visa. 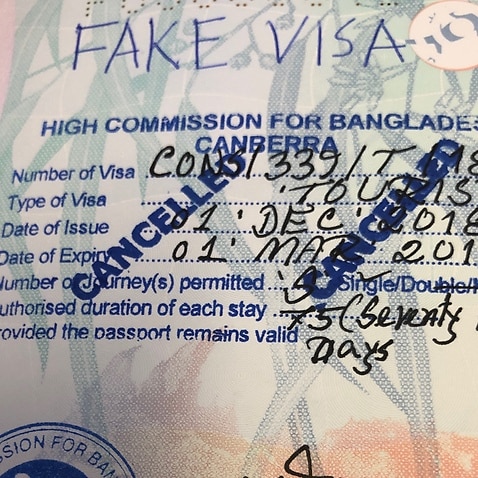 Rohingya refugees in Australia caught up in Bangladesh visa scam

SBS Bangla has discovered that he is one of at least 20 Rohingyas living in Australia who were recently detained at Dhaka international airport and deported on suspicion of invalid visas.

Bangladesh Immigration Police interrogated Faruk and the other passengers and sent them back to Australia on 20th December 2018.  During questioning they told authorities that they had collected their visas from an employee at the Bangladesh High Commission in Canberra. SBS Bangla has seen a copy of an internal report by Bangladesh Police at the airport which records the victims' statements.

The letter, written by an Immigration official states that “In the time of interrogation the passengers were asked how they collected the visa and they told a man by the name of Agent B * who has been residing in Australia and a citizen of Myanmar guided them. Then they sent their travel documents and $150 to Employee A* at the Bangladesh High Commission in Canberra, by post and got the visas accordingly.”

Faruk claims he was told to send his travel documents by express post to Employee A's home address. Australia Post envelope in which Faruk* sent his travel documents and money to Employee A.
Supplied

“I got this visa from Employee A, of the Bangladesh High Commission in Canberra and I paid cash," he told SBS Bangla back in Sydney.

“To get the visa I sent my travel document and dollars along with return envelope to Employee A's home address."

SBS Bangla has confirmed through Australia Post that the envelope was signed for by a person with the same name as Employee A. The Bangladeshi High Commission in Canberra phased out manually filled in visas February 2018 in favour of newer, machine-readable visas.  However, it's claimed that some manual visas continued to be issued without the knowledge of the High Commission.

Many Rohingyas currently in Australia have told SBS Bangla that a combination of a lack of English, not knowing how the system works and a lengthy process to issue visas led them to seek help from within the community.

Aman Ullah says he paid $350 for a Bangladeshi tourist visa through a Rohingya who is acquainted with him. He also claims his visa was issued by Employee A.

“I heard the visa scam news then I went to the Bangladesh High Commission in Canberra. ShamimaPervin (Second Secretary at the High Commission) told me there that this visa is a forged one. In order to get a new visa she said I need report this to police, which I did,” says Aman, adding "we want to stop the fake visas.  Everyone should be able to travel to Bangladesh in a genuine way."

Mohammad Idris claims that when some community members came to him for help, he advised them to send their money and travel documents to Employee A's home address to speed up the visa process believing the visas to be legitimate.

"This person is a High Commission official so how do we know this is a fake or right visa when it was issued?" he said.

After SBS Bangla first published the story many from the Rohingya community have since come forward.

Australian citizen Amina Khatun, now living in Melbourne, works as an interpreter for the Rohingya community in Australia.  She says a number of victims have spoken to her about their experience of being issued fake visas. Shawfikul Islam from Melbourne is also involved with Australia's Rohingya community.  He claims to have evidence of an agent helping Employee A.

"I have evidence against Agent C*. He is an agent who works with Employee A. They charged $320-$600 AUD for each tourist visa though it's fake."

How much do Australian authorities know?

At the end of December 2018, at least six Rohingya refugees made a formal complaint to Woden police station in Canberra. They say police noted their complaints and gave them an event number.

In a statement to SBS Australian Federal Police (AFP) confirmed that ACT Police have received complaints regarding 'an alleged fraud concerning the issuing of visas for travel', saying investigations are continuing. Victims of the visa scam made an official complaint to ACT Police.
SBS Bangla

"The AFP made a query to know whether the visas are genuine or not involving those who were sent back to Australia from Dhaka Airport," he told SBS Bangla.

In a written statement in response to the allegations, Bangladesh High Commissioner Sufiur Rahman acknowledged that the High Commission had received travel documents with 'fake handwritten visas' on them over the past two weeks from some Rohingya refugees from Australia'.

"While we have allegations, we cannot conclusively establish involvement of any of our staff, though we have received names of some agents/ handlers perhaps from Sydney and Melbourne. We are yet to receive a detailed report from the relevant Bangladesh authorities on such document holders' travel to Bangladesh and our authorities' findings that led to deportation of some of those Rohingyas."

He did not comment on the allegations of Employee A's involvement put to him by SBS Bangla.  But he did acknowledge that in April 2018 and again in November, Shamima Pervin, the Second Secretary at the High Commission had alerted them about the issue of fake visas.

Mr Rahman also confirmed to SBS Bangla that the signature of the High Commission's Second Secretary, Ms Shamima Pervin, had been forged on the false visas.

"We got several samples from Dhaka, we checked - that is not her signature," he said and added that investigations are continuing.

"The High Commission does not investigate. Bangladesh authorities are working on this issue."

*Identity has been witheld 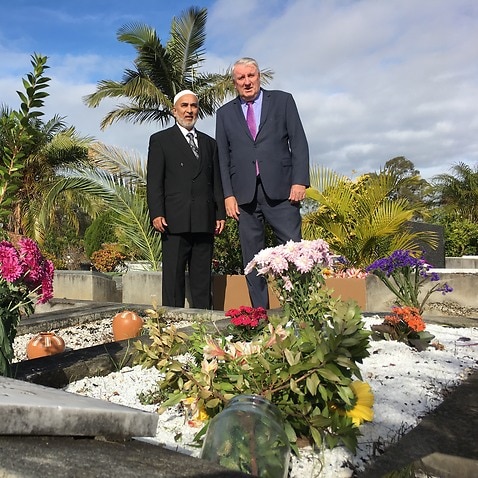