Increasing numbers of Australian tourists are visiting Nepal but are concerns about safety and pollution worrying them?

Lucky Sherpa is Nepal's Ambassador to Australia. When she meets the locals in Canberra or other parts of the country, many are curious about her last name.

"Sherpa being synonymous with mountaineering, they're also very curious about Nepal and the diversity it has to offer," she told SBS Nepali.

At a recent event organised in Canberra to celebrate the third anniversary of Nepal's new constitution, Ambassador Sherpa also launched a campaign to encourage Australians to visit Nepal.

"Journey to Nepal" campaign is being organised by the embassy to support Nepal government's tourism drive to attract more than 2 million visitors in 2020. What do Australians say?

For Australian travel entrepreneur Chris Walker, Nepal is not only about tourism but is also a place for emotional and mental healing.

The corporate retreat specialist says in 2018; he has organised trips for more than 20 small groups to the country.

The first time Chris went to Nepal was 35 years ago. "Since then, I've been to Nepal more than 50 times", he says. His contribution to the country was also recognised at the Canberra event. 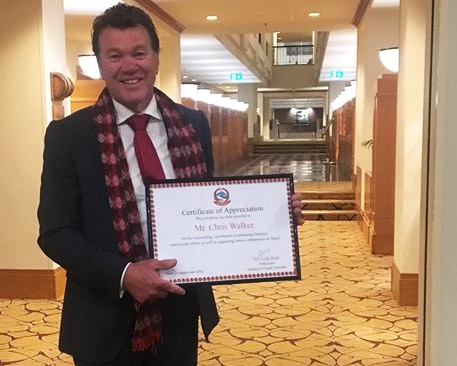 Chris Walker with "Certificate of Appreciation" from Nepali Embassy in Canberra.
Supplied

However, he thanks Nepal and its people for the inspiration to take his work to Canada and “help arrest youth suicide and domestic violence in indigenous communities”.

Australian author and mountaineer Garry Weare and his wife Margie Thomas recently finished their 17 days trip to Nepal. During this leg of their annual journey, they trekked to Lo Manthang in the upper Mustang region bordering Tibet.

Weare, who is also the deputy chairman of The Australian Himalayan Foundation, has been a trekking guide for over 35 years.

He says one of the main reasons he keeps going back to the country is because of the Nepali people.

"Without any doubt, that is the overwhelming reason," Weare told SBS Nepali.

"I have trekked many times in your country, but it is the generosity and kindness shown to me by the Nepali people that keep me coming back to Nepal," he said.

For Margie Thomas, Tibetan Buddhist culture in Upper Mustang is very special. Every year she takes a group of Australian trekking enthusiasts to Nepal. This year the couple had organised a fundraising campaign to support a local school in a place called Chosar.

"We encourage our trekking clients to go to Upper Mustang to raise funds for supporting small communities in need along the way. It's our way of giving back to Nepal", says Margie.

Garry Weare and Margie Thomas are among the thousands of tourists travelling to Nepal this year.

According to Nepal’s Tourism Board, the country welcomed more than 680,000 visitors between January to August 2018 - an increase of more than 18 per cent over the same period in 2017.

Nearly 1,400 Australians arrived in Nepal in August this year – an increase of more than 39 per cent compared to last year.

The Australian Bureau of Statistics (ABS) told SBS Nepali that a total of 32,000 Australian residents returned to the country from Nepal during the 2017- 2018 period. 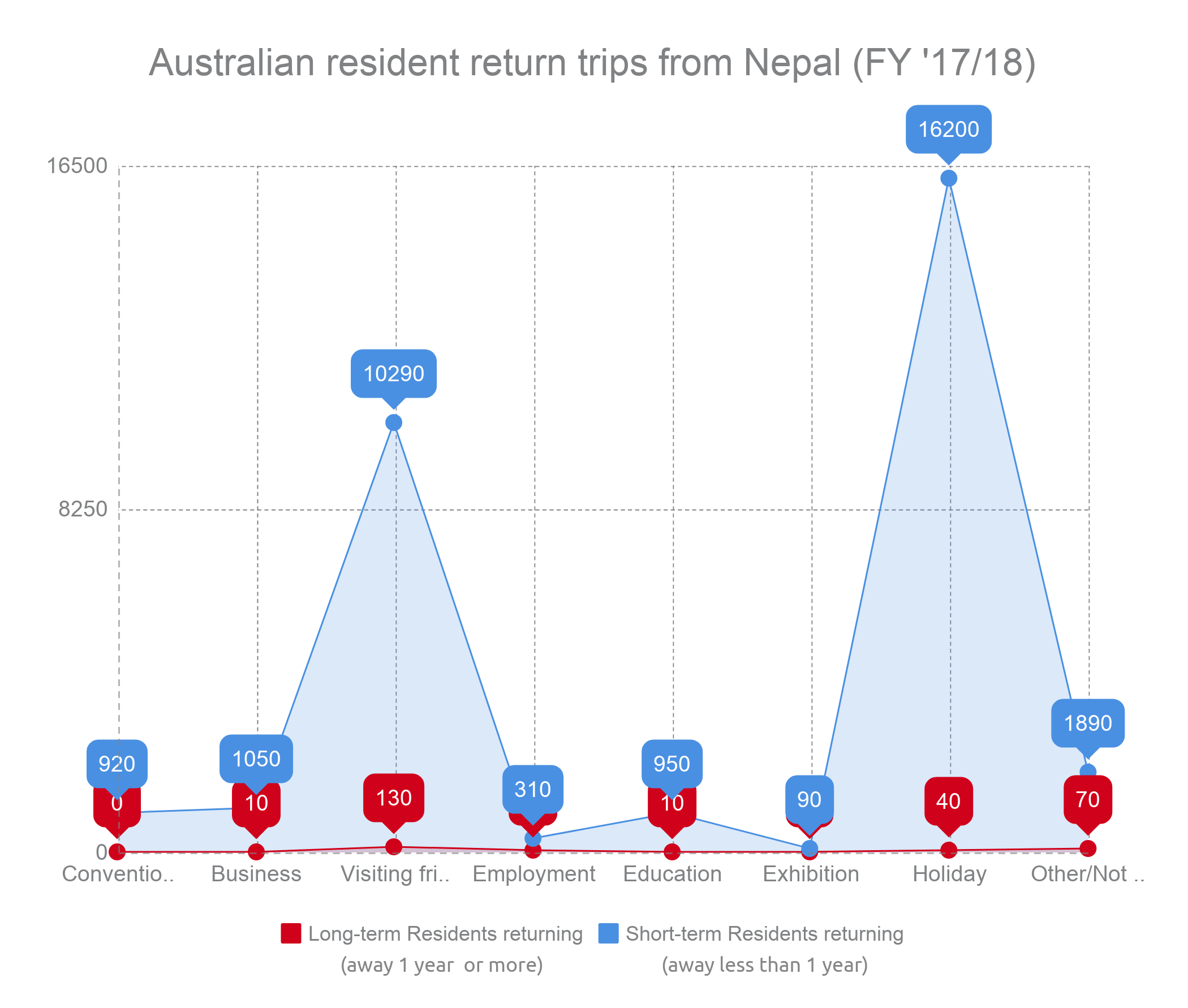 Among them, more than 16,000 stated their primary reason for travel to Nepal as "holiday." While more than 10,000 visitors stated "visiting friends and relatives" as the purpose of their trip.

But it’s not just the number of people going to Nepal but how much revenue they are contributing to the local economy.

Officials say tourists to Nepal spend 12 days on average and contribute between USD 500 to USD 3000.

However, with many westerners travelling to countries like Nepal and challenging themselves to “spend as low or nothing” as possible, it is an issue that concerns the ambassador. 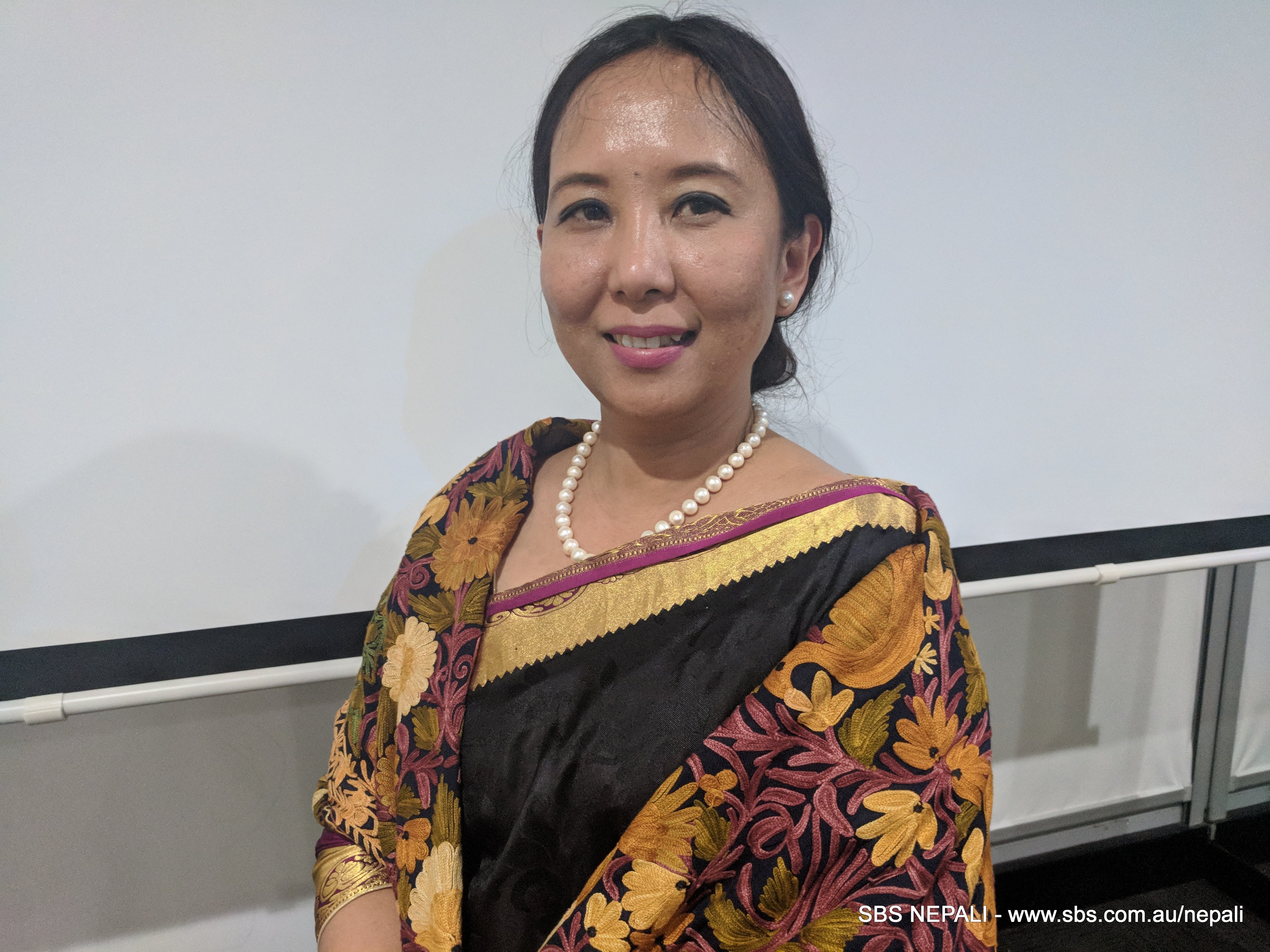 Giving Bhutan as an example where tourists have to spend a minimum of AUD 250 per day, she says Nepal may need similar policies.

Chris Walker agrees with the Ambassador. He says tourists from certain countries “give as little and take as much as they can”. Mandating minimum spend by the government will stop people with such attitude he says.

The October to December period is said to be the peak time for Australians visiting Nepal. But with the Australian Government's current travel advisory to Nepal urging Australians to exercise "a high degree of caution", will this affect the tourist number to the country?

But increasing levels of pollution, especially in the capital Kathmandu, is something that concerns them.

"Because of pollution and heavy traffic in Kathmandu, I try to spend less time here", says Margie Thomas.

On the other hand, Chris Walker says his clients always want to go back after their first visit to Nepal. "No one has complained to me yet about pollution or the travel advisory by the Australian government.”

However, Kathmandu's pollution does concern him and so does the problems with infrastructure in the country. 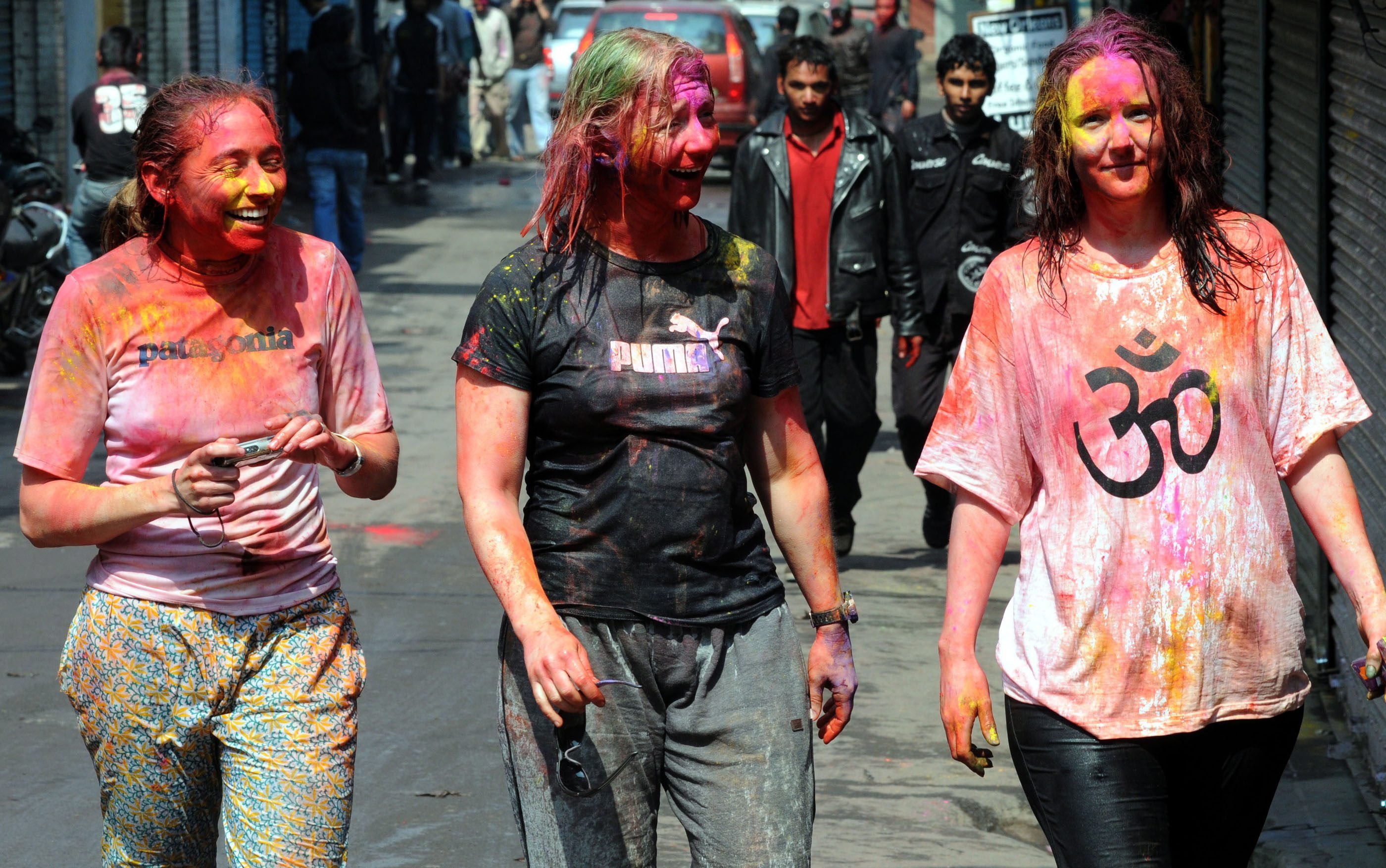 Tourists are smeared with coloured powder as they celebrate Holi, the festival of colours in Kathmandu, Nepal.
EPA/NARENDRA SHRESTHA

The Nepali government is celebrating Visit Nepal year in 2020, hoping to bring more than 2 million international visitors. In preparing for this promotion initiative, the government is now focusing on infrastructure development.

Binayak Shah is the General Secretary of the Hotel Association of Nepal. He says the government needs to take steps to improve air quality in the country.

"No one wants to celebrate their vacation by wearing a mask to get relief from pollution", he says.

"Despite increasing number of tourists coming to Nepal, we are failing to impress people who would spend more money in Nepal."

Melbourne residents Anne Riggs and Alex Pinder are the founders of Artists in Community International. They have been travelling to Nepal for the past few years, and they agree that the authorities need to solve the problem of pollution. 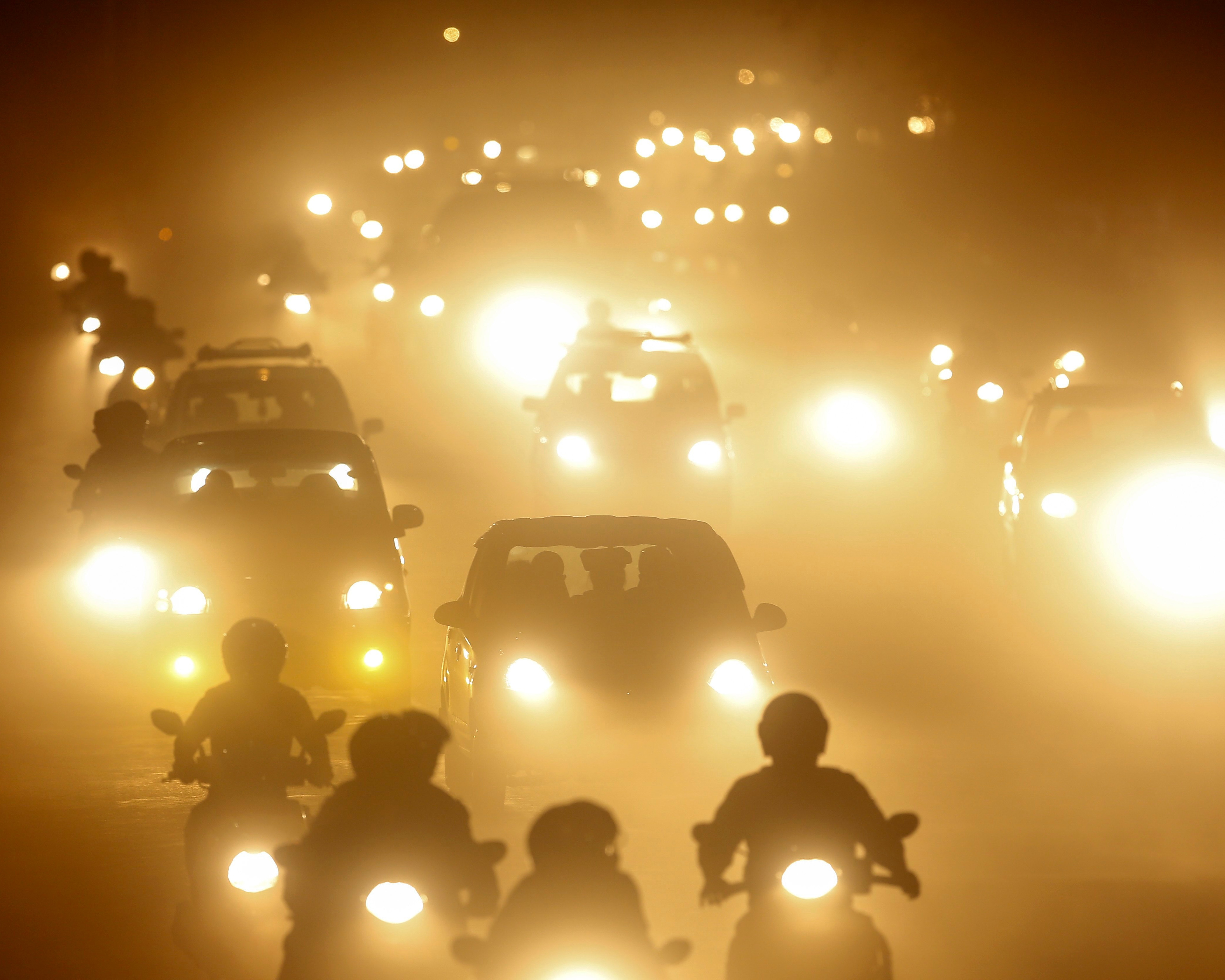 According to reports, roads expansion, increasing number of vehicles, the dumping of construction material on the sidewalks have aggravated air quality.
EPA/NARENDRA SHRESTHA

As part of their work, Riggs and Pinder have held performance art sessions with school children near the capital highlighting the problems of air and water pollution.

“Most people go there to see the mountains or the natural beauty of the country, but when tourists get there they see mountains full of plastic”, says Riggs.

Nepali officials say the government is serious about addressing issues including pollution. 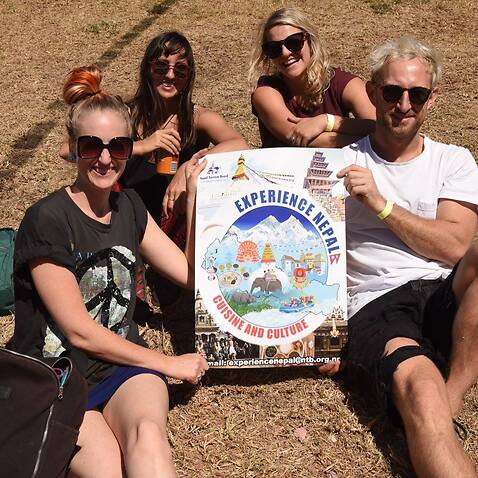