Once bustling with diners, Melbourne's restaurant industry is among the hardest hit by the COVID-19 pandemic. With several hospitality businesses already shut down, many others may be hanging by a thread and owners say if Jobkeeper stops, they may collapse as well.

Johnny Di Francesco is a well-known Australian-Italian chef, entrepreneur and a former world pizza champion. The food empire he has built includes 12 pizza restaurants in Melbourne and Adelaide and a few more in the USA and the Middle East.

But because of the COVID-19 pandemic, all his businesses were hit at some point and had to be temporarily closed.

He says he had to lay off 70 staff member in Australia – some of whom have left the country for good – while he is renegotiating his leases with landlords, including the Crown Casino in Melbourne.

“Crown has been amazingly supportive and so has been the government. Nevertheless, it’s a very tough, stressful situation.”

“I thank God and the country I live in because no matter what, here you can still eat. Without the government’s help, I would have had to sell my business to put bread on the table,” Mr Di Francesco told SBS Italian. Chef Johnny Di Francesco has several pizza restaurants in Australia, US and the Middle East.
400 Gradi

He says his businesses survived the first lockdown in Melbourne but he had to move quickly this time around.

As soon as Melbourne was placed under Stage 4 lockdown, he rented additional space to sell the stocked fresh ingredients, including fresh pasta, vacuum-sealed pizzas, antipasti etc.

He says because his restaurant business was restricted to selling takeaway, he had to find a way to keep himself busy.

“You can’t stick your head in the sand, because a busy mind is a healthy mind. You’ve got to stay strong, stay positive as it’s all about mindset. Negative thoughts will bring people down,” he says. 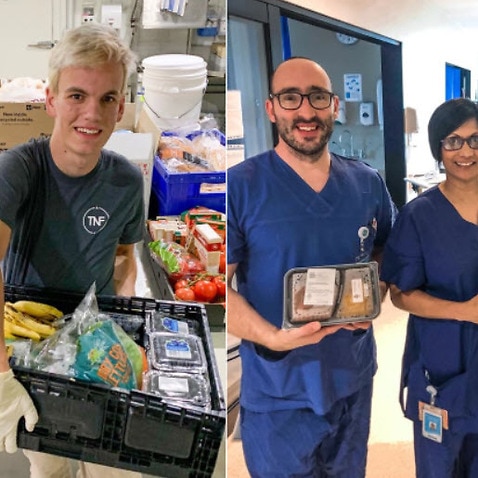 How a 20-year-old quit uni to make 55,000 free meals for medicos in Melbourne's lockdown

While Mr Di Francesco has been able to keep his businesses running in some form, many others haven’t, particularly in Melbourne’s CBD where the clientele is mostly white-collar city workers.

39-year-old Italian migrant Alberto Fava was running two restaurants – Osteria Ilaria and Tipo 00 – in the CBD. But with Stage 4 restrictions in place, he opted to only run one.

“It’s a disastrous situation. Of the 50 staff members, we used to employ, we could only offer part-time employment for only ten of them,” he says. Alberto Fava has closed down one of his two restaurants in Melbourne CBD since the start of Stage 4 restrictions.
Alberto Fava

He says the current scenario looks dire, yet with a bit of creativity they're dealing with it.

"There’s a lot of competition and not enough customers and yet we're doing well with cook at home meals, take away, cooking classes and supplying deli with our own made pasta".

Mr Fava highlights some of the recent complications: "You can’t really cook meals with the face mask on, the workers’ permit obligation and the curfew don’t suit our business and the whole picture takes the magic off hospitality sector".

"Stage 4 gave us all the final hit”

Mr Fava says life would be easier if he could close down his second business as well.

“But we have fixed costs. If we shut down the restaurant we lose $20,000 every month. So, we are keeping it open, not to make money but to survive and to help our staff. Without Jobkeeper, we wouldn't be able to do even that” Some of the best Italian mozzarella in Australia is made by... Russians

Even with the help of the government’s Jobkeeper scheme, 35-year old Matteo Paoletti Teodori wasn’t able to keep his Italian restaurant ‘Michelangelo Osteria’ open. The first lockdown left his popular Melbourne hub without his traditional clientele of CBD workers and recently-arrived migrants.

He and his wife Ilaria offered takeaway meals and freelanced for a few months, helping out their inner-city fellow chefs. Until they realised the demand for food was still out there, except that it was in the suburbs.

“Offices are deserted and there’s none to serve in the CBD. We tried everything we could, but in the end, we were lucky to find a commercial kitchen within a sports centre in Maribyrnong.” As the football venue closed down, the managers let the couple use the facility 10 km from the city centre.

“We couldn’t just sit and wait, we had to set up a plan B and now we offer Roman-style sliced pizza take away four days a week,” he says.

Crossing borders for love, in the middle of a pandemic

Mr Paoletti Teodori says he is also dependent on JobKeeper payment for survival and shrugs to look beyond that.

“The government is investing a lot of money, but in a few months time, this help will be cut. It’d take a crystal ball to guess what will happen next. The only thing I am sure of is that it will take a long, long time before Melbourne hospitality industry will get back to what it was.” The $1,500 Jobkeeper wage subsidy has been extended to March 2021, albeit with tighter eligibility and the rate of payment will fall to $1,200 for full-time workers and $750 for those working fewer than 20 hours a week. The payment will be further reduced in January next year with no guarantees that it will continue beyond March 2021.

That, Mr Fava says, would mean closing down his second restaurant as well.

"Lots of people will lose their jobs and many restaurants will have to close down."

2014 world pizza champion Mr Di Francesco says he is hopeful of getting out of the COVID-19 at some point but isn’t certain about the future of the industry.

“What hurts the most is to see people who put their heart and soul into their business, but had to close it down. We’re going to get out of this, but I’m worried whether the hospitality [sector] is going to be back to where it was. Is it going to thrive the way it was thriving?”