While being serious about cracking down on these disguised massage shops, the police say they are more concerned about the welfare of the vulnerable people working in these places than enforcing moral values on anyone.

In Melbourne, there are 91 licensed brothels for the population of 5.9 million.

According to Project Respect, a not-for-profit organisation providing support for women in the sex industry and women trafficked for sexual exploitation, there are around 500 illegal brothels in Melbourne.

“I can say that the large proportion of illegal brothels are massage shops,” he tells SBS Thai.

“A lot of those are in your suburban shopping strips, something like that.” 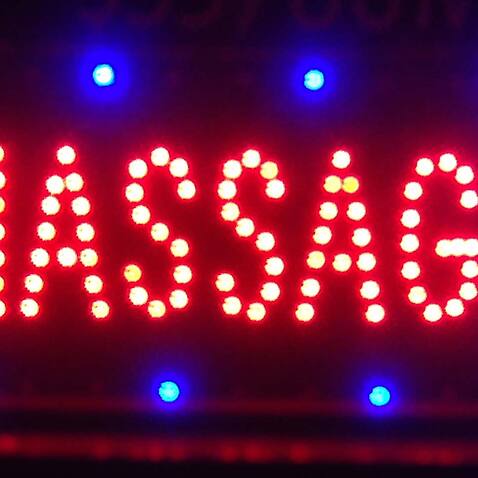 According to Victoria Police’s Sex Industry Coordination Unit, ‘dodgy’ massage shops offering sexual services are not specific to  Thai massage, nor are they specific to massage shops run by a particular demographic, whether Thai, Chinese or Vietnamese.

Even though the staff in such businesses come from a wide range of countries, people from South East Asia are heavily represented in those shops.

One of the key reasons many illegal brothels masquerade as massage shops is due to the simple requirements to open a massage shop and the ‘pop up’ nature of the industry.

“There are a very few barriers to entry,” says Sergeant Farrelly.

“It will depend on the council if a permit is required and whether a qualification of staff is required.

“That makes it very difficult for us to police.

“The nature of the industry is that of a ‘pop up’ industry -it can open one day and close down the next.

“There are very few barriers to get into a massage industry and it doesn’t particularly need a qualification to open a massage shop.”

On the surface, the problems of disguised massage shops can be seen as merely a breach of Victoria’s Sex Work Act 1994 by providing sexual services without a license to do so.

But the real issues underneath can range from public health issues relating to STIs, to the lack of appropriate safety standards for workers at illegal brothels, and exploitation of workers.

“While it might sound like it’s consensual between two people, but there are a lot of vulnerable people around that,” says Sergeant Farrelly.

“There’s a big theme we see in the industry that is the exploitation of vulnerable people.

“They might be people who are on visa, or low wages or they don’t have a high level of education and they can’t find a job anywhere else.

“Therefore we are taking it seriously.” An objective of the awareness campaign is also to build up trust between the police and people in the massage industry.

“What we also do when we go into a massage shop, our biggest concern, is the welfare of the staff there and that they are being treated properly,” says Farrelly

“We will ask those questions to make sure that even though the staff are not providing sexual services, we make sure they are not exploited by managers and owners there through underpayment and being fined for small indiscretions, like leaving lights or power points on.”

Sergeant Farrelly explains that for many of these employees, their homeland experiences with the authorities may have already made them wary of police.

“For some of the staff, they may come from a country where police are not as ‘nice’,” he says.

“To have the police come to them, explain and give them a warning – and not pulling them away, is quite a difficult concept for them to understand.”

“It’s a big thing for us to build up trust for people involved in the massage industry to be able to provide us with information as well.”

Who tips off the police?

Farrelly explains that in general the police receive information about ‘dodgy’ massage shops from different sources, such as councils, Australian Federal Police, Border Force, Department of Health, as well as from the neighboring businesses, other legitimate massage shops, licensed brothels and the general public.

Once a thorough investigation is done and there is enough information indicating a massage shop is providing sexual services, the police will get a search warrant.

“Then we will go in and will execute a search warrant at the premises and get a lot of evidence that way,” says Farrelly.

“We speak to a lot of people and witnesses to provide enough evidence to be able to charge the person.”

“We mainly target the owners and the managers of the massage business.

“They are looking at an offence of being an unlicensed sex work service providers.

“They haven’t been given a license to operate a brothel and in a massage shop they never will - the licensed sex industry is heavily regulated - there are lots of requirements for someone to open up a legal brothel.

“So the offence is that of an unlicensed sex work service provider.

“But we also target the living off the earnings of sex work. That particular offence targets the exploitation of the vulnerable people that work there.”

After a search warrant, if there is enough evidence and witnesses to prove that the owners or the managers of the massage business have some knowledge that sexual services are being provided there, the police can make an application to the court to have the premises declared an illegal brothel.

Then it can be shut it down and the police can bring some charges against the owner or manager of the illegal brothel.

It is also essential for the police to ensure the staff working at the disguised massage shop receive some support after the closure of their workplace.

“For example, in a massage shop you may have three or four staff working there,” says Farrelly.

“If we close it down, they are out of the jobs.

“We have to actually think about their welfare as well. So we put them in touch with support agencies, like Project Respect and RhED to make sure that they are looked after.

"We don’t want to put vulnerable people in a situation that they then become more vulnerable because they haven’t got an income or a job."

Senior Sergeant Richard Farrelly states that according to Victoria’s Sex Work Act 1994 running an illegal brothel carries a jail term. "For the unlicensed brothel, it’s up to five years imprisonment," he says.

“Living off the earnings of sex work carries the term of up to five years imprisonment.”

What about legitimate massage shops?

The police warn genuine massage businesses to keep their businesses in check to avoid any complications.

“There’s a lot responsibilities around owners and managers to make sure they know what their staff are doing behind the closed doors in the massage rooms,” Farrelly explains.

“Otherwise there can be allegations made - and if we can substantiate those allegations, they may see their premises closed down and having it declared an illegal brothel, which is the last thing they want if in their own mind that they are running a legitimate massage shop.”

“It’s important that they have fully trained staff to understand that sexual services can’t be provided,” says Senior Sergeant Farrelly.

In addition, the police want to spread the word among people working at massage shops, whether engaging in legitimate massage or providing ‘extras,’ that they should contact the police if they fear for their personal safety while working.

“They must really think about their personal safety, get themselves out of the situation and call 000,” says Farrelly.

“It’s important that they trust the police.

“A lot of massage staff feel that because the police come down and we will contact the Immigration about their visa issues - It’s not the case at all.

“We are more about the person’s welfare and catching the offender than we are about contacting the Immigration for visa issues.

“What we hear quite often is that ‘I didn’t contact the police because I was afraid they would do something about my visa’, even though they are victims.

“So I can’t stress enough about the important of contacting the police.”

Lastly, for punters who seek to receive a ‘happy ending’ or ‘extras’ from massage shops, the police have this message for them: “Victoria Police is a not a moral police.”

Watch The Feed' episode featuring the full story (created in collaboration with SBS Thai) on SBS OnDemand below: