The unparalleled bravery of 21 Sikh soldiers who died defending the Saragarhi post, fighting gallantly against hundreds of Orakzai tribesmen back in September 1897, is commemorated in the annals of military history as the greatest tale of valour ever recorded. The valiant soldiers of the 36th Sikh Regiment have already been the subject of many books, articles, documentaries and movies. But did you know that there is an Australian link to the legendary Battle of Saragarhi?

The fabled Battle of Saragarhi took place at a small British outpost in the Samana Ranges on 12 September 1897, when anywhere between 10,000 and 12,000 Pashtun tribals launched an all out attack for many days.

It was manned by just 21 Sikh soldiers who repelled a ferocious attack by the tribals for many hours. Led by Havildar Ishar Singh, the valiant soldiers fought unto their last breath, going on to killing and wounding hundreds of their attackers.

News travelled fast and almost every Australian newspaper reported this within days. The Sydney Morning Herald of 15 September 1897 reported, “ A thousand Orakzais stormed the post of Saragari, which was held by 21 men of the 36th Sikh Regiment.”

The Hobart Mercury of 15 September 1897 added, “This handful heroically defended the position for six hours, but all perished. One gallant fellow defended the guard room singlehanded, killing twenty of his assailants and was finally burnt at his post.”

And the Brisbane Courier published on the same date went on to say, “News from the north-west frontier of India states that the Afridi tribesmen, who to the number of 10,000 had been intercepted by the force under Brigadier General Yeatman-Biggs, are now attacking all the posts on the Samana Range.”

This is where the Australian connection comes in, because a British officer who was second-in-command of the 36th Sikhs, called the fallen sepoys of Saragarhi “men of mine”, adding “they died fighting like demons.” He and his band of soldiers went on to defend the ensuing attack on Fort Gulistan, despite a siege that went on for three days.

Bollywood superstar Akshay Kumar plays the pivotal role in the film Kesari, which is inspired by the Battle of Saragarhi
Supplied

Siege of Fort Gulistan and the Australian connection

Six years before the Battle of Saragarhi, an officer from Australia’s Queensland Defence Force had joined the  36th Sikh Regiment of the Bengal Infantry.

Major Charles Des Voeux had been serving as the Deputy Assistant Adjutant General and Infantry Staff Officer at QDF, before he was posted to India. He and 166 of his men from the 36th Sikhs, along with his family were stationed at Fort Gulistan, during the uprising of 1897, when Saragarhi fell.

Thousands of tribesmen laid siege at Fort Gulistan, where Major Des Vouex, his heavily pregnant wife Eleanor and their three children were confined along with the garrison. Heavy fighting ensued and under the Major’s command, the 36th Sikhs did not “give an inch”, and despite heavy casualties, they “captured three of the enemy’s standards”. The bravery of Havildars Kala Singh and Sundar Singh during this seige, was especially highlighted in an article published in the Australian Town and Country Journal on 8 July 1898.

Records indicate that Eleanor Des Vouex and their Australian nanny Teresa McGrath nursed the injured soldiers, and tended to their wounds until reinforcements could come and the attack was finally quashed after three days.

Mrs Des Voeux gave birth to a baby girl during this siege. She was named Violet Samana, after the name of the mountain range around them. 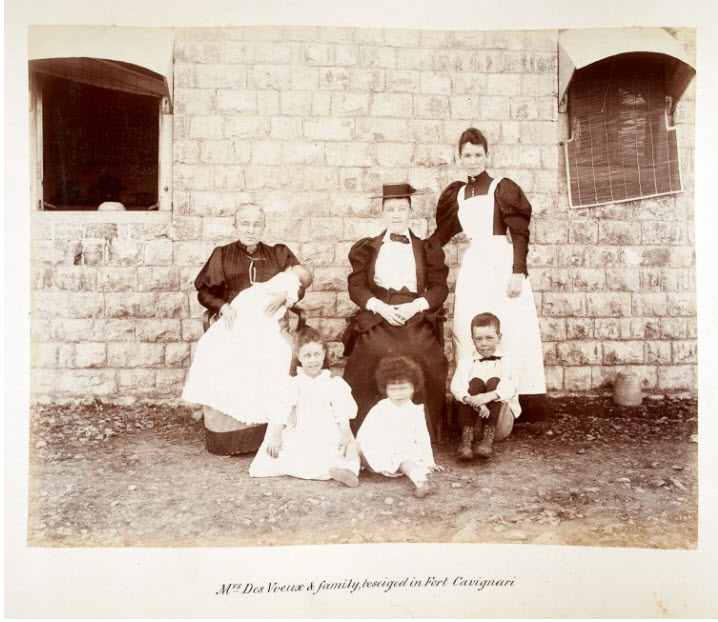 Captain Jay Singh-Sohal, who has written the book Saragarhi: The Forgotten Battle and has presented the docu-drama Saragarhi: A True Story, told SBS Punjabi more about Maj Des Voeux’s role in the battle.

“Charles Des Voeux was the 2nd in Command (2IC) of the 36th Sikhs. Born in 1853 in Ireland, he attended Royal Military Academy Sandhurst and was commissioned in 1872 into the 37th (North Hampshire) Regiment of Foot. Later, upon passing the exam for India service, he transferred over to the Bengal Staff Corps.”

“But before joining the 36th Sikhs, he first transferred to the Queensland Defence Force in Australia - where he served as Deputy Assistant Adjutant General. It was in Australia that he met his wife, Eleanor, who was from Brisbane. They married and had children.”

He joined the 36th Sikhs in August 1891, and as was stationed at Fort Gulistan when the tribesmen launched the attack on Saragarhi and the surrounds in September 1898. Excerpts of article in Australian Town and Country Journal on 8 July 1898, describing the valour of Havildar Kala Singh at Fort Gulistan
Trove

A letter written by Major Des Voeux on 18 September 1897, describing the siege of Fort Gulistan was later published by the Brisbane Courier Mail, highlighting the effort of “two brave Queensland women” and the “gallantry of the Sikh soldiers.”

“We have had severe fighting here. We were attacked and closely invested for three days – 12th, 13th and 14th September, when we were relieved.”

Talking about Saragarhi, Major Des Voeux wrote, "The fort next to us, with twenty-one men of mine and one follower, was taken by storm, and fell at 3.40pm on the 12th”.

"The whole garrison were killed. I hear they died fighting like demons."

"My men here (Fort Gulistan) fought like tigers, but we lost heavily – forty-four out of the 166, killed, wounded and missing. Things are very serious indeed but my men pulled me through."

“The enemy were all around, within twenty yards, well under cover, and firing like mad. I ordered a sortie at 8 am on the 13th, as the enemy were getting too close, and it was carried out in the most splendid gallantry, we captured three standards.” He added, “A good many of my poor wounded are dead or dying; the rest have been sent to Fort Lockhart.”

Major Des Voeux then praised the role played by his wife’s nurse, Teresa McGrath during the siege. “Teresa surpassed herself attending to the sick and wounded. Her name has gone forward for reward and I hope she will get it. She will certainly get the medal and probably an order. I have recommended thirty of my men for the order of merit (the Indian Victoria Cross).

The 21 Sikh soldiers who died fighting in Saragarhi received the Indian Order of Merit (IOM) medal posthumously. All those who fought on the Samana and the subsequent Tirah expedition to subdue the Pashtuns received a campaign medal, the India Medal 1895-1902, with clasps for their areas of operation.

Captain Singh-Sohal told SBS Punjabi, “Des Voeux's family was the only one at Gulistan at the time of the 1897 uprising. It was fairly common for officers to bring their families with them to the frontier for short periods of time, and for Des Voeux it was important to have his pregnant wife nearby at the time.”

“There was no sense that an uprising was imminent, but with this being the case it would have been safer for the women and children to stay put within the armed defence of Fort Gulistan where the Des Voeux's were based.” A letter written by Major Des Voeux on 18 September 1897, published in the Western Star and Roma Advertiser on 27 October 1897
Trove

He added, “Mrs Des Voeux was heavily pregnant and so, not very mobile. Nonetheless she and her nurse, Teresa McGrath, helped bandage up wounded Sikhs during the siege of Gulistan between 12-14 September. She also helped deliver the Des Voeux baby, named Violet Samana, despite the siege. For her bravery, the nurse was recommended by the Secretary of War Lord Lansdowne for the Royal Red Cross medal which she received at Windsor Castle in 1899.”

It was reported back in Australia, that Teresa McGrath was an orphan - a ward of the state, who showed exemplary courage on the battlefront at Samana ranges.

Asked if the events at Saragarhi and Gulistan changed the way that the British viewed Sikh soldiers, Captain Singh-Sohal said, “Sikhs were already respected as a martial race. The brave defence, not just at Saragarhi but the actions of the Sikhs and their Christian officers at Gulistan and Lockhart was recognised in the London Gazette and the Times newspaper.” The ruins of the Saragarhi post, after it was reclaimed by the British troops, a few days after it fell
Captain Jay Singh-Sohal, British Library

What happened to the Des Voeux family thereafter?

Des Voeux received the Indian Medal, with clasps for the Punjab Frontier, Samana and Tirah. A year after the tribal uprising, he served in operations in Sudan, for which he received both the Queen's Sudan Medal and the Khedive's Sudan medal. He and the Sikh soldiers who fended off the siege are still fondly remembered as 'Gulistan Bahadurs' (the brave men of Gulistan).

Although there are no known photos of Des Voeux wearing a turban, it was common for British officers commanding 'native regiments' like the 36th Sikhs, to wear a turban like their troops, and follow their traditions.

Capt Singh-Sohal says, “Charles Des Voeux continued to serve with the 36th Sikhs, and remained in India. He commanded the 5th Mhow Division in 1907 and later rose to the rank of Lt General but died in Worthing, UK in 1911.”

He adds that one of his sons went on to serve in the same regiment as their father. “The Des Voeux sons, Henry and Seymour, fought in the Great War. Seymour was with the 36th Sikhs in Mesopotamia but died in Feb 1917 during the Second Battle of Kut.”

Capt Singh-Sohal and SBS Punjabi are keen to establish contact with the descendants of the Des Voeux family, to continue this research about the Australian links to the Battle of Saragarhi. 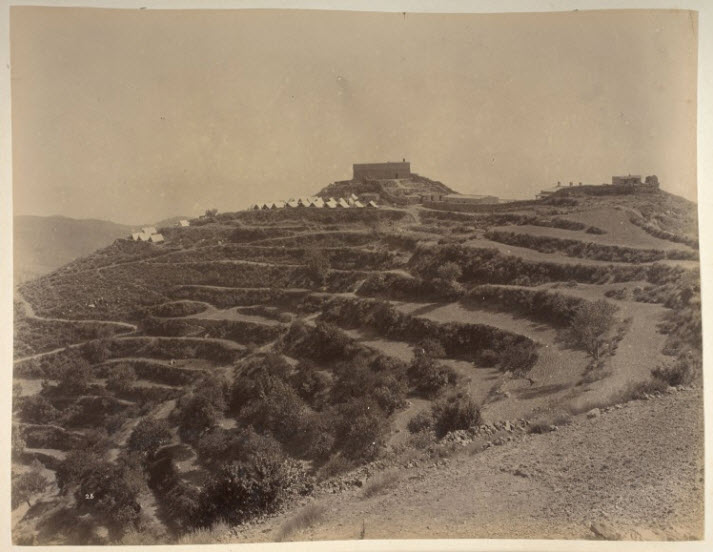 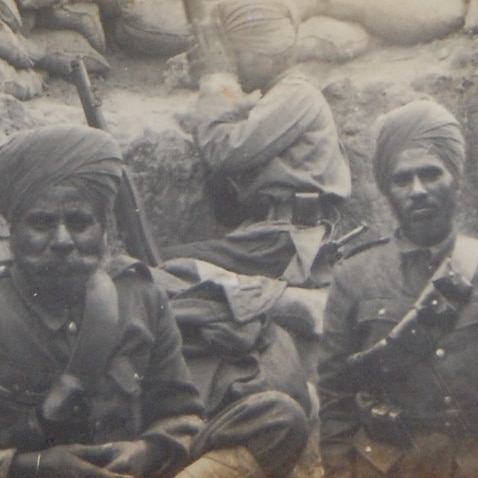 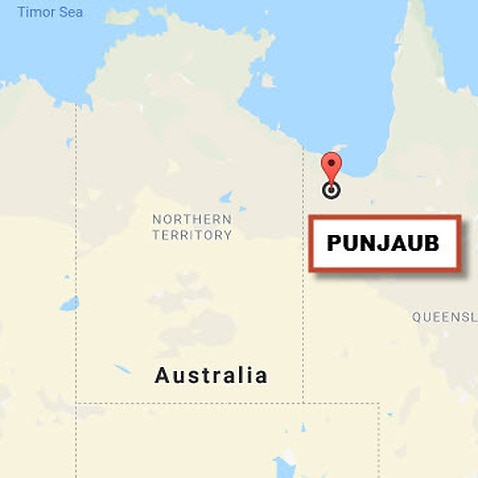