Data released by the Australian Institute of Health and Welfare reveals how long you can expect to live varies depending on your address.

It's the one certainty we all share; the inevitability that one day we will all die. But what isn't so predictable is when.

In Monaco, for example, the average life expectancy hovers at around 89 years of age, while in Chad it's just 50.

Australians born in 2013-2015 can expect to live 82.4 years on average - up from 82.1 years for those born in 2011-2013. But the likelihood of dying from a preventable cause varies based on where you live, according to a new report from the Australian Institute of Health and Welfare (AIWH). 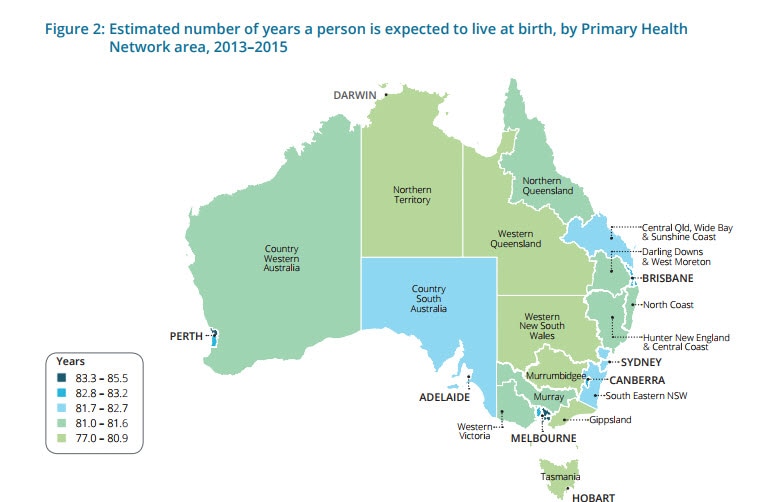 Estimated number of years a person is expected to live at birth, by Primary Health Network area, 2013 - 2015
myhealthcommunities.gov.au

"Life expectancy is going up ... and we have seen the rates of potentially avoidable deaths, in general, have also gone down, but there is significant variation across different communities."

The report, Life expectancy and potentially avoidable deaths 2013-2015, was published on 30 November 2017. It shows that those living in Northern Sydney can expect to live the longest; at 85.5 years, while the Northern Territory had the shortest life expectancy; at 77.7 years.

The greatest improvements were seen in four Queensland areas while Gippsland in Victoria recorded the largest fall, down by 0.5 years.

"One of the main findings of the report is that metropolitan areas have higher life expectancy than regional areas," she said.

"We know from previous reporting that people who live in regional and remote areas have higher rates of chronic disease such as diabetes or cardiovascular disease. But also may have more occupational and physical risks, from farming or mining work or transport relating accidents.

"They are also more likely to engage in behaviours associated with poorer health so high rates of daily smoking, alcohol intake and higher rates of risk factors such as overweight or obesity."

But while the news is generally good for Australians, according to the Early Life Nutrition Coalition life expectancy could drop in Australia in the not too distant future.

The coalition made up of professional, academic, advocacy, corporate and healthcare groups from Australia and New Zealand has launched a campaign encouraging good nutrition and lifestyle choices in the first 1000 days of life - starting from conception.

Chair of the Early Life Nutrition Coalition and University of Queensland professor Peter Davis said research reveals our health outcomes later in life are significantly affected by the biological and physical environments we occupy during the first 1000 days of life.

"If we can get these key messages through we can make a difference to the health of children in Australia and New Zealand," he said.

"Everyone knows we have significant issues with obesity, diabetes, cardiovascular disease. We know that these are major issues but we also know that these things can be affected in a very positive way within the first thousand days."

The AIWH report shows the rate of potentially avoidable deaths was higher in regional areas than in metropolitan areas, with particularly notable results seen again in Northern Sydney and the Northern Territory. Potentially avoidable deaths are deaths that occur before the age of 75 such as transport accidents, contact with dangerous animals or plants or cancer deaths that could have been prevented with early screening.

Northern Sydney had the lowest rate of potentially avoidable deaths of 62 deaths per 100,000 people, while the rate was highest in the Northern Territory at 226.

For the full results and to see how your community fares, visit myhealthycommunities.gov.au