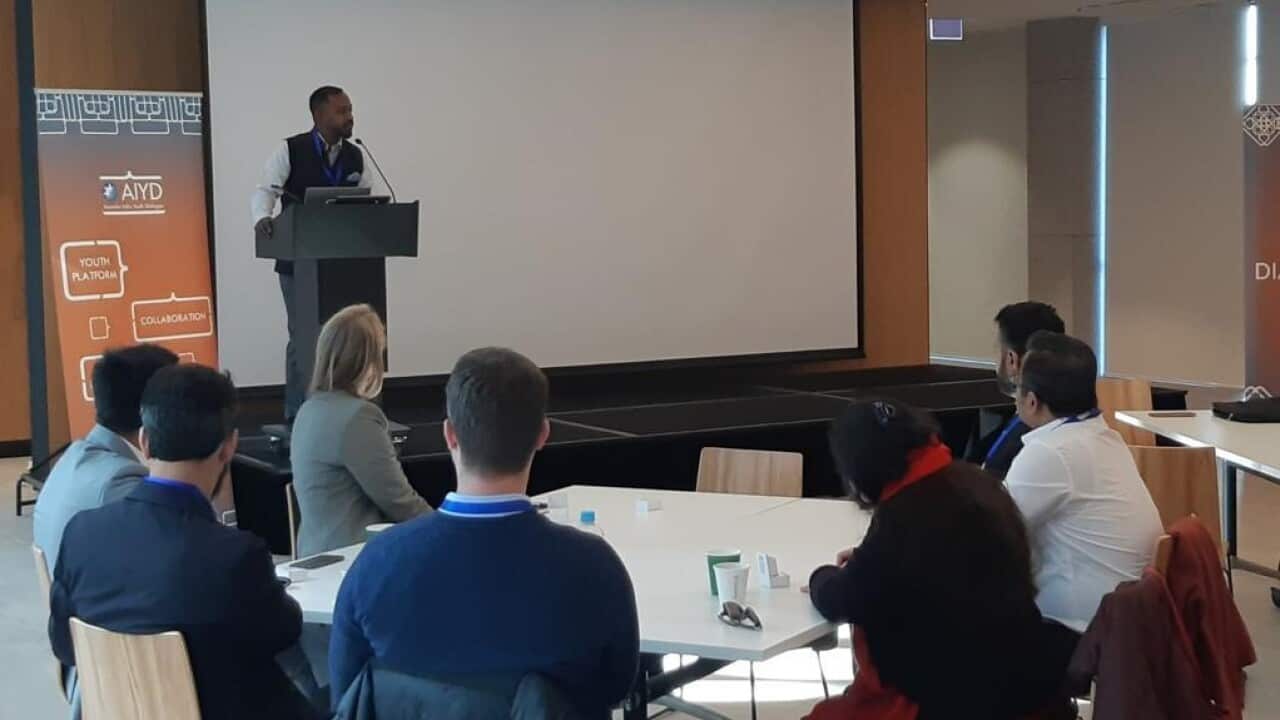 The Australia-India Youth Dialogue (AIYD) this year brought together nearly 50 talented young people including politicians, entrepreneurs, journalists and sportspeople from both countries who shared innovations and ideas drawn from their own work and experiences in a bid to shape the bilateral relationship.

Published 6 June 2022 at 1:23pm
By Natasha Kaul
Source: SBS
After a two-year absence due to the pandemic, the 10th AIYD conference, held in Melbourne and Sydney from May 31 until June 3, welcomed a record number of delegates.

The theme for this year's event was: "Build Back Better: a Post-COVID 19 Recovery Strategy".

Nearly 30 new participants this year explored ways to deliver a shared vision for the two countries across four keynote panel discussions on climate change and sustainability; business, fairness and human rights; the role of research, health and technology and geopolitics; and cybersecurity and defence ties.

In addition to this, the inaugural Emerging Leaders Retreat 2022 was also held with 20 participants from the AIYD alumni network who discussed the future of bilateral trade, soft power and climate change.

Addressing the delegates, Mr Abbott said: "India was always a more natural partner for Australia than China... We share democracy, the rule of law, to a considerable extent the English language, and of course, we have a shared passion for sports which is one of the great glues between people in different countries."

He highlighted the role of people in shaping the bilateral by saying "It is on to us to make this relationship work. Government can talk but people do, government can plan but people can realise the potential in all of these plans."

Speaking at the occasion, Mr O'Farrell pointed out the success of the recently struck trade deal between the two nations.

"Given the sensitivity of this, it really is a tribute to the goodwill on both sides."

Manuraj Shunmugasundaram, AIYD Steering Committee Chair, said: “The purpose of the Australia-India Youth Dialogue is to harness the energy of tomorrow’s leaders to set out a compelling roadmap for the growing ties between two great democracies."

“I am so pleased to say that this aim was met and the spirit upheld at AIYD22, with a renewed focus on recovery from the pandemic, to accelerate opportunities for the youth of India and Australia in business, the arts, not-for-profits and diplomacy."

Meanwhile, a
petition
was initiated for Mr Surya’s Australian visa to be revoked as well as calling for universities including Monash University and Macquarie University to revoke their partnerships with AIYD.

In response to this, another
petition
was launched to welcome Mr Surya and raise an objection to "allowing the cancer of cancel culture to be induced in India-Australia relations."

Since 2012, each year, 15 talented young minds representing each country participate in the youth-led dialogue to promote exchange and partnership for both sides.

The AIYD’s efforts have been supported by the Australian High Commission in India, and state governments in Australia. The AIYD conference is also supported by universities and businesses that have an interest in empowering youth in the Australia-India relationship.