'Australia is our home': Yazidi family lends a hand to fire-ravaged NSW community

A Yazidi family that arrived in Wagga Wagga as refugees two years ago is determined to give back to their town by volunteering in the ongoing bushfire relief efforts.

Yazidi youngster Haji Gundor and his family are doing all that they can in their NSW town of Wagga Wagga to assist those affected by the devastating bushfires which have decimated large parts of the state.

The family is volunteering at the Kildare Catholic College where Haji is a student, by separating and grouping donated items.

The college has been converted into a centre to collect and distribute supplies for families evacuated from neighbouring towns, which have been affected by the devastating bushfires. Volunteers are also making up individual packs intended for firefighters on the front line.

Haji, his two sisters, brother and parents arrived in Wagga Wagga as refugees in 2017 after fleeing Islamic State persecution in northern Iraq.

"We make sure that everything is in order so when my teacher wants it, they can easily find the stuff there," Haji says.

"[I got involved after] seeing it on a website and then I heard a lot of people talking about it in Wagga and as I told you before a few days ago that I have spoken to my community that we need to help support Australia and support them during the bushfires.

"At the moment it’s only me and my family who are here, I don’t know if some other Yazidi community members are helping in other parts of Wagga. We wish peace, we pray for the fires to stop and we wish they feel better.” Career advisor at the college, Karen Murray, says the town has become the temporary home for thousands of people evacuated from towns such as Batlow and Tumbarumba.

“Wagga Wagga is not directly affected by the fires but our surrounding communities are and we have thousands of people evacuated to Wagga Wagga to seek shelter as the fires impacted their homes,” she says.

“So we at Kildare Catholic College are a donating centre taking donations from the community. Anything from food, clothes, toiletries, anything you could possibly imagine we have here, so we continue to take those donations but we are also a centre where people who have been evacuated can come and collect supplies. 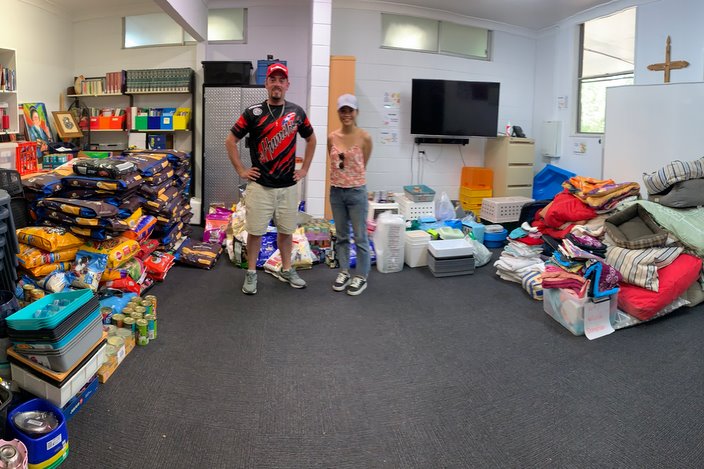 Haji says contributing to the relief efforts is a way to say thanks to Australia for providing assistance in the family's time of need: “Australia is our home and it is very important to us as a part of our hearts.”

The youngster says he has lost sleep over some of the interactions he’s had with affected families.

“I was just closing my eyes and seeing the victims’ faces. Yesterday I met a boy aged five and he lost his home. I tried to make it better by giving anything but he was not taking anything, only asking for his home.” 'The people are wonderful': Yazidi family embraces a new way of life in Australia

Where are evacuees being housed?

Ms Murray says the community has banded together to provide accommodation to evacuees.

“The first thing they need to do [when they arrive] is to go out to the Equex Centre out here and register that they are in town and from there they’re being directed to motels.

“The community has been amazing though, motels have been putting people up for free, Charles Sturt University has opened up 300 beds, the boarding school here is available if needed, lots of local Wagga families have offered beds and shelter and food as well.”

She says that the items being donated ranged from clothes to food and toiletries.

"We have food, we have water, we have lots of different household items as well, and just today we’ve been doing up special packs for firefighters so another community near us, The Rock, came and collected the packs and took them directly to the firefighters. In those packs are things like wipes, deodorant, lip balm, hand sanitiser, some snacks just so we can keep the firefighters going.

“As you can imagine some of them [evacuees] are quite distraught, some of them are in a state of disbelief - not being able to comprehend exactly what’s happening and they know that in the next couple of hours they could find out that they lost their home and their possessions. So you know they’re very nervous waiting to hear what’s to come in the coming hours.”

Here's how you can help