Recognizing contributions made by refugees in Australia 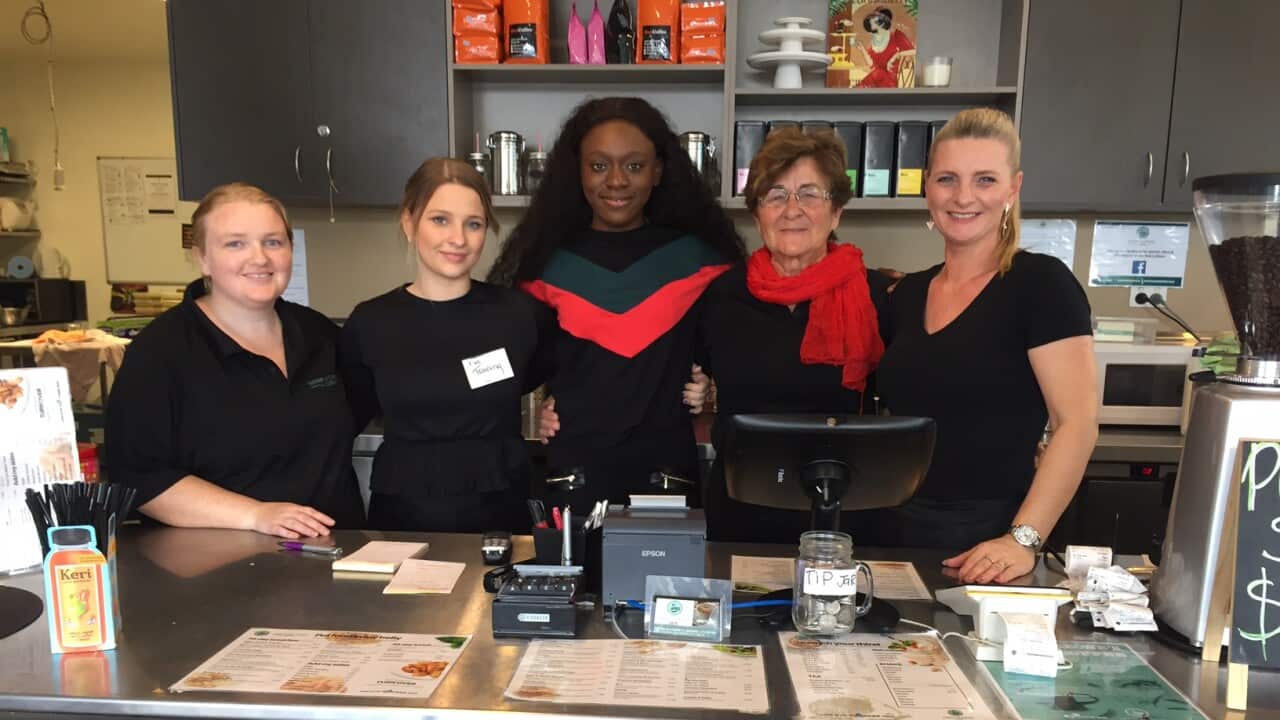 Pemba and her former colleagues at the Harmony on Carmody Cafe Source: Amy Chien-Yu Wang

Sunday the 17th to Saturday the 23rd of June is
Refugee Week
in Australia. This year’s theme is #WithRefugees, a call to protect the safety and rights of refugees.

19-year-old Pemba Tshulembo’s  journey as a refugee began on the day her father’s political rivals stormed into his funeral.

Advertisement
Pemba had already lost her mother in a car accident. She and her three siblings had no choice but to leave the Democratic Republic of Congo for Kenya where they stayed for 5 years.

Pemba was over the moon when she received news that she could resettle in Australia even though she knew nothing about the country.

Mahir Momand’s family was forced to flee to Pakistan from Afghanistan when he was a baby after his father, an Afghan military general, was jailed by the Russian army. He was determined to make a difference in his home country where unemployment was pervasive.  He resettled in Canada, but despite the comfort of living there Mahir felt he still had unfinished business back home.

But the violence became too much after several of Mahir’s colleagues were killed by the Taliban. He was also attacked in a separate incident. Fearing for his life, Mahir had to flee his beloved home country again. This time, he was offered to resettle in Australia.

With his expertise in microfinancing, Mahir now leads the
Thrive Refugee Enterprise
, an NGO that helps refugees and asylum seekers start or grow their own business.

Paul Power is the Chief Executive Officer of the
Refugee Council of Australia
. He says Australia has accepted over 880,000 refugees in the past seven decades.

Through Refugee Week, the organisation hopes to draw attention to the needs of refugees worldwide and recognise their contributions to Australia.

Some of those former refugees are now seen as valuable assets to the Australian economy.

One prominent example is Sir Frank Lowy, the founder of Westfield. With close to a million refugees resettled in Australia over the last seventy years, the country is expecting to welcome around 18,000 more in the coming year.

Many of the refugees are women who were forced to leave home under extremely dangerous circumstances.

It’s been two and a half years since Pemba arrived in Logan. She went into Year 11 hardly speaking any English, but through sheer willpower, she quickly excelled in her classes. She’s since graduated from high school and is now training to become a model. Pemba says she is lucky to have had a chance to work at Harmony on Carmody and save towards her university degree.

This Refugee Week, hundreds of events will be held across Australia in support of refugees around the world. It's a chance for refugees to feel welcome and accepted in the country they now call home, says Pemba.