Australia's $529 million icebreaker, the RSV Nuyina, arrived in Hobart with little of the planned fanfare, due to the city's snap lockdown. 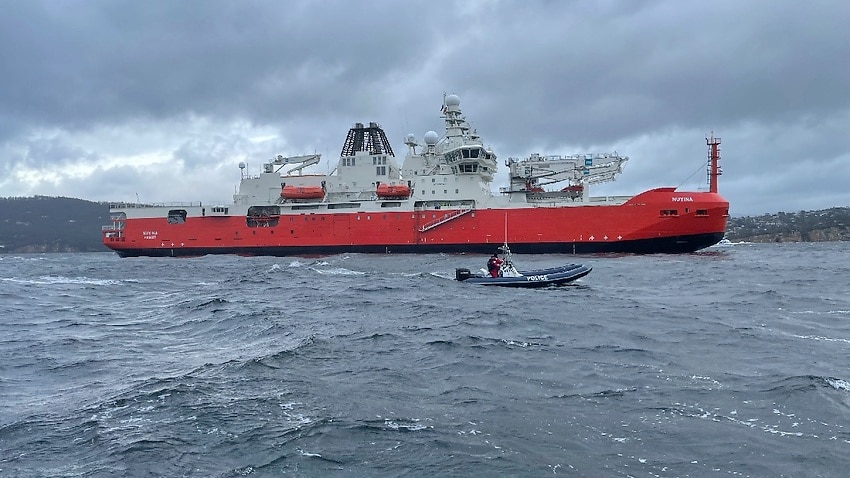 After several delays and a 24,000km ocean voyage, Australia's new $529 million Antarctic icebreaker has docked at its Hobart home.

Plans to welcome the RSV Nuyina with a River Derwent flotilla and waterfront party on Saturday morning were scuttled by a snap three-day lockdown in southern Tasmania.

The 160m-long vessel can carry 117 expeditioners and is a significant upgrade to the nation's scientific and research station re-supply efforts.

"As well as all its logistic capabilities it represents once of the most advanced science platforms on the ocean.

"The ship is going to be the most significant element in our Antarctic program. It represents Australia's presence in the Southern Ocean and Antarctic."

The vessel, named after an Indigenous word for southern lights, contains a unique 13m 'moon pool' allowing robot craft to be deployed through the hull.

On top of built-in laboratories, it can be fitted with modular labs in shipping containers.

It left the Netherlands in early September and will undergo further testing, including ice trials, in Antarctica, and outfitting.

"The ship will begin operations later in December with its first commissioning voyages down south," Mr Ellis said.

"It'll return back to Hobart, then another trip to Mawson (research station) and Macquarie (Island)."

Nuyina had to be towed from Romania, where it was built, to southern Holland for sea trials after the travel of specialists was hampered by COVID-19 restrictions.

It was originally expected to arrive in Tasmania in 2020, and had suffered building delays prior to COVID-19.

Four coins, including an Australian 50 cent piece were welded into the ship's hull, as per maritime tradition, during early construction in 2017.

It replaces previous icebreaker, Aurora Australis, which retired from its role in March 2020 after 30 years.

A temporary re-supply vessel chartered last summer caught fire in the Southern Ocean and was forced to limp to Western Australia with returning expeditioners aboard.