The 63-year-old also said he was "fully cooperating" with authorities to determine how the incident occurred. 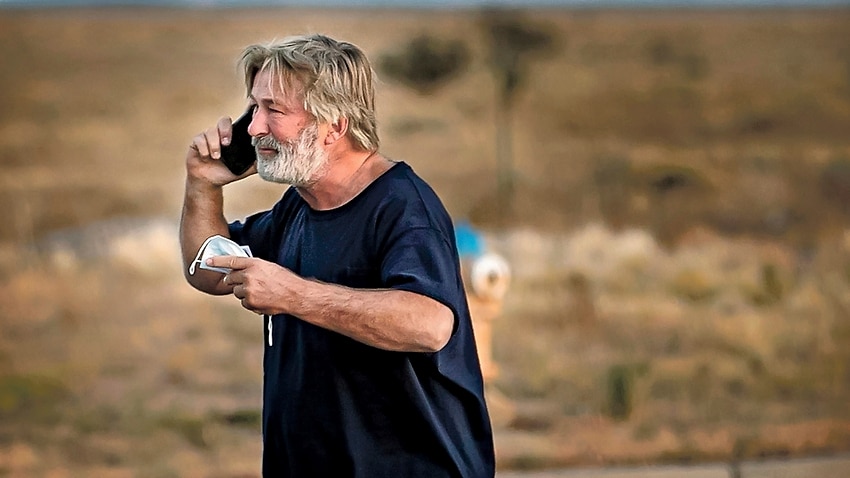 Actor Alec Baldwin says he is in shock over his accidental fatal shooting of a cinematographer on a New Mexico movie set, as police investigated the incident and Hollywood debated the safety of prop guns.

The star of 30 Rock and The Hunt for Red October said he was "fully cooperating" with authorities to determine how the incident occurred on the set of his Western movie Rust.

"There are no words to convey my shock and sadness regarding the tragic accident that took the life of Halyna Hutchins, a wife, mother and deeply admired colleague of ours," Baldwin wrote on his social media accounts.

"My heart is broken for her husband, their son, and all who knew and loved Halyna," added the actor, who was pictured looking distraught and tearful on Thursday.

1-
There are no words to convey my shock and sadness regarding the tragic accident that took the life of Halyna Hutchins, a wife, mother and deeply admired colleague of ours. I'm fully cooperating with the police investigation to address how this tragedy occurred and

The Santa Fe Sheriff's Department said the incident occurred on Thursday at the Bonanza Creek Ranch, south of Santa Fe.

Hutchins was pronounced dead at a local hospital. The film's director, Joel Souza, was wounded and later released from the hospital, Rust actress Frances Fisher said on Twitter.

The sheriff's department has said two people were shot on the set when Baldwin discharged a prop firearm. It gave no details on Friday about how the accident happened but said no charges had been filed and the investigation remained open. Production on the movie was immediately shut down and the road leading to the set was closed on Friday morning, with security guards turning people away.

Baldwin voluntarily gave a statement about the shooting at the sheriff's office, the Santa Fe New Mexican newspaper said.

The International Alliance of Theatrical Stage Employees (IATSE) said in a statement that it was "heartbroken and devastated" to learn of the death of Hutchins, who was a member of the union.

We are heartbroken and devastated to learn that one of our members, sister Halyna Hutchins, died yesterday from injuries sustained on set while working as the Director of Photography on Rust in New Mexico.https://t.co/HGNVlewaTp

Hutchins' representatives in a statement called her "a ray of light. Always smiling, always hopeful."

"We hope this tragedy will reveal new lessons for how to better ensure safety for every crew member on set," the statement added.

Because most of the images linked to the tragic story on the set of ‘Rust’ are of Alec Baldwin, not the cinematographer, Halyna Hutchins, who lost her life today in such a tragic accident. Rest in Power. pic.twitter.com/n0nlJtJoRd

Baldwin, 63, is also a co-producer of Rust, which is set in 1880s Kansas. He plays the outlaw grandfather of a 13-year-old boy convicted of an accidental killing.

A picture posted by Baldwin on Thursday of himself dressed in cowboy-style attire, with what appeared to be a fake blood stain on his shirt and jacket, was deleted after the accident.

Hutchins' own social media channels, in which she described herself as a "restless dreamer" and an "adrenaline junkie," show snapshots of life behind-the-camera, one that sometimes involved exotic locations and travel, as well as the mechanics of moviemaking such as dollies and massive cameras. They also demonstrate her deep appreciation for moody, evocative imagery and a painterly command of light - sunsets, rocky shorelines, even lattes explode in bursts of vibrant color.

Hutchins, 42, was born in Ukraine and started her career working on British documentary productions in Eastern Europe. After moving to Los Angeles, she began working in production jobs and graduated from UCLA's Professional Producing program in 2010. She went on to graduate from AFI Conservatory, and in 2019, was selected as a rising star by American Cinematographer magazine.

Filmmaker Rachel Mason, a close friend of Hutchins, said the pair would bond and let off steam by going on hikes. They would sometimes talk about the difficulty of getting ahead in an industry that remains male-dominated.

The cinematographer who died when Alec Baldwin fired a prop gun and wounded the director.

But it’s Halyna Hutchins who lost her life. #SayHerName pic.twitter.com/8JmgHjckAg

Hutchins, who had over 32 credits which include short and feature films, "impressed all the guys," said Mason. "She could do anything ... She commanded the world."

Sometimes the peripatetic nature of filmmaking meant that Mason and Hutchins couldn't meet up in person, but they remained in frequent communication by text.

"She was the most enthusiastic DP I could ever imagine because all she ever wanted to do was talk about working on the set," Ms Mason said.

Despite that devotion to work and the demands of the job, Hutchins remained deeply enmeshed in the business of raising her son.

"Nobody realizes that being a dedicated mother was a huge part of who she was, she just kept that separate because, in this industry, it's hard to get jobs," said Mason.

"In general as a female, you don't often talk about having kids because it's just one more thing that brings attention to you if you're trying to get work."

The accident renewed debate about whether certain types of prop guns should be banned on TV and movie sets.

Brandon Lee, son of martial arts legend Bruce Lee, died at age 28 after being fatally wounded in 1993 by a prop gun in an on-set accident while filming The Crow.

"I don't understand why we would still use blank rounds in a day when you could simulate them," indie film director and producer Ben Rock told Reuters on Friday.

Rock, who was not involved in the Rust film, noted that visual effects now possible in post-production effectively simulate the muzzle flashes from firing blank rounds, making the dangerous practice no longer necessary for the sake of realism.

Hutchins, 42, who was originally from Ukraine, was named one of American Cinematographer's Rising Stars of 2019. Her last social media post, two days ago, shows her grinning under a wide-brimmed hat as she rides a horse. "One of the perks of shooting a western is you get to ride horses on your day off:)" she captioned the video.

April Wright, a writer, director and producer, was among friends paying tribute to her.

"I'm in disbelief," wrote Wright. "So young, vibrant, and talented. Such a wonderful soul. My heart goes out to her son and family."