The legal dispute between Rugby Australia and Israel Folau has been settled with a confidentiality agreement and an apology from both parties. 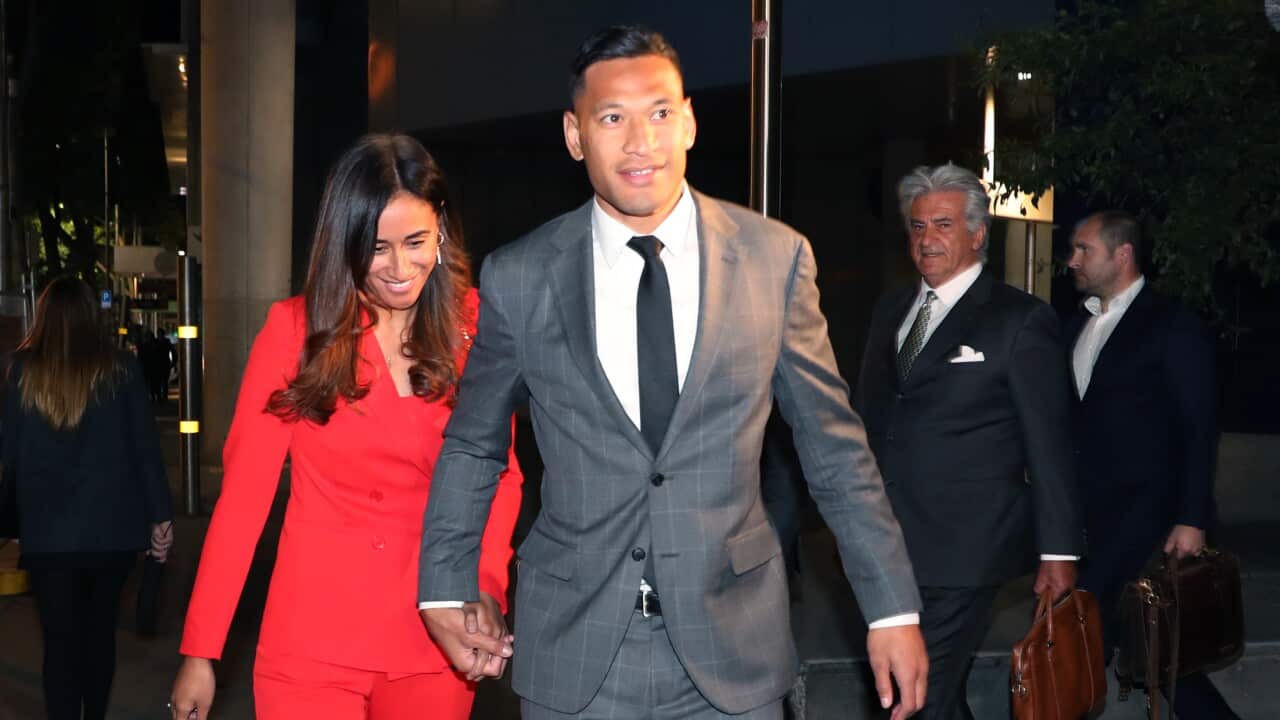 Israel Folau and his wife Maria leave the Federal Court in Melbourne after a long mediation with Rugby Australia. Source: AAP

Eight months after an Instagram post got Israel Folau sacked from the Wallabies, the rugby player and Rugby Australia wished each other
well for the future after signing a confidential settlement.

In a joint statement on Wednesday, both parties apologised for any "hurt or harm" they caused each other.

This agreement came after mediation ordered by the Federal Circuit Court had gone for a marathon 12 hours on Monday, then wrapped up over the phone on Wednesday.

Folau, who also played for the Waratahs, had reportedly rejected in May a $1 million offer to walk away of his case.

He asked for $14 million in compensation for being sacked over his controversial social media posts, which read: "Drunks, Homosexuals, Adulterers, Liars, Fornicators, Thieves, Atheists, Idolators: Hell Awaits You. Repent! Only Jesus Saves."

The payout is believed to be $8 million, The Daily Telegraph reports.

Israel Folau and his wife Maria appear in a video posted to his website. Source: IsraelFolau.com

Rugby Australia said it was within its rights to sack him.

RA and NSW Rugby said they "do not in any way" agree with the content of Folau's post.

"Inclusiveness is one of Rugby's core values and it welcomes all people to the game, including all members of the LGBTI community," the joint statement said.

"Mr Folau did not intend to hurt or harm the game of rugby and acknowledges and apologises for any hurt or harm caused."

With his wife Maria by his side, Folau later published a video statement on his website.

"With today's acknowledgement and apology by Rugby Australia, we have been vindicated and can now move on with our lives to focus on our faith and our family," Folau said on Wednesday.

"We now look forward to the federal government enacting the legislation necessary to further protect and strengthen these rights for all Australians."

Despite the settlement, equality advocates raised diverse opinions on the matter.

Equality Australia stated that in spite of the details being confidential, "it is clear that Rugby Australia did not back down on its support for the LGBTIQ+ community."