Outside of China's bustling big cities, social media offers a means for the nation's gay community to meet, support each other and find love, reports Primrose Riordan. 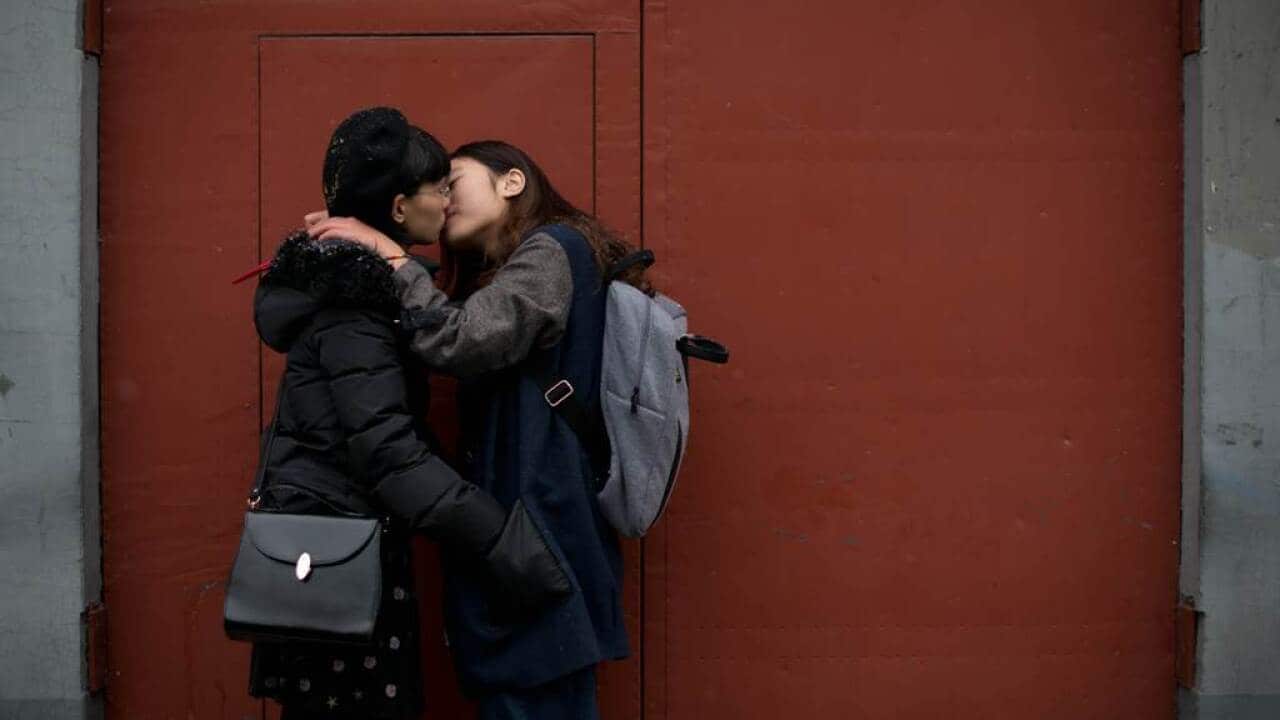 Two women kiss near the registry office where they asked to be married, before being turned away, in Beijing on February 25, 2013. (AAP)

Chinese versions of the
“hook-up app” Grindr
are surging in popularity among gay men and women living outside the more liberal Beijing and Shanghai, serving up a dose of freedom for those who can’t come out to their families.

Gang Le, a former policeman, founded the
Grindr-like app Blued
,which allows gay men to use their mobile phone to search for potential partners nearby. Gang Le, who is gay and uses the app himself, says gay men and LGBT people in China’s so-called third and second tier cities make up 80% of the users.

But this statistic doesn’t surprise long-time followers of the gay scene here. Beijing-based gay activist and founder of NGO Queer Comrades, Xiao Gang is originally from
Xinjiang
, a sparsely-populated province - by Chinese standards - in the often restive northwest.

Advertisement
“Social media can help a lot in small cities. There are no gay bars, so you meet online,” he says.

Seeing the market grow has got gay dating site Xuanta founder Sense Lou planning the launch of a new location-based LGBT dating app before the end of this year.

But sexually conservative attitudes permeate the online world too.  On the homepages of gay-oriented dating sites Feizan and Xuanta (set up by a former engineer at
Baidu
, China’s search engine giant), users are politely urged to sign up for love, not sex: “We’re different to other dating sites, pornography, including pictures and videos, are not welcome!” Blued also instructs users to look for friends and love.

Regular Blued user, Harry Lui, a 31-year-old Beijing man who has studied in the UK, says men who contact him on the app “dance around the sex question.”

“In the US or in the UK, they will just go straight for it. [In] Beijing really they want the same thing, they’re just more coy,” he says.

Despite finding the instructions a bit puritan, and promoting the idea that “having a lot of sex is a bad thing”, activist Xiao Gang says social media has been good for the gay community. “Knowing that there are other people around you in the countryside going through the same thing helps people’s mental health,” he says.

Living in fear of being outed

With many LGBT people keeping their sexuality secret from their families, friends and colleagues, it’s no surprise that Blued’s tagline is “no longer lonely.” A 2013 study of Chinese gay men in
Hunan province’s
‘second tier’ city of
Changsha
found one in ten were married to women. One in three experienced abuse in their relationships, mostly from male partners. This was five times more than their heterosexual peers in the control group.

Researchers Yu Yong, Shuiyuan Xiao and Kirin Qilin Liu from
Sichuan’s
University of Electronic Science and Technology interviewed 418 gay men. The research found that many of their male partners had threatened to out them when things got messy, while women who married gay men (or “gay wives”) used the threat to keep their partners from breaking up with them – an enormous loss of face.

Kirin Liu says many stay on in abusive relationships “because they think it’s very difficult to find someone else.” He added that the choice to stay in gay relationships put a lot of pressure on many interviewees.

The study found as many as one in ten gay men lived in fear of being outed by their partners - a threat particularly potent in China where Confucian traditions and the importance placed on having children keep many in the closet.

“Traditional Chinese culture is deeply rooted in the minds of many gay and lesbian people,” Liu says.

Xiao Qu, 23 and from
Chengdu
in Sichuan province, hasn’t spoken to her father in 10 years. She is “lala” or lesbian. In a confrontation with her father she discovered that he didn't just regard her sexuality as a bad thing - it was “truly horrible.”

After realising she was gay at 13, she first met another lesbian when she was 18.

“I thought I was so weird and couldn’t understand why I was made this way,” she says.

She now works in technology in
Kunming
, has many gay friends and meets other women online.

“There aren't many gay bars here so we use private groups for single lesbians on (popular social media apps) Wechat and QQ to organize to hang out together,” she says.

“In small towns, it simply the most important thing for us.”

One step forward, another back

The rainbow is ever widening over the red nation. Chengdu in Sichuan is known as China’s gay capital (a “gay paradise!” Xiao Qu enthuses), Shanghai has an annual PRIDE festival and revelers keep gay clubs open every night of the week in capital cities.

But discrimination against LGBT people, while hard to measure, remains prevalent, and HIV. discrimination remains a serious concern in China. As recently as October, the Ministry Of Commerce drafted regulations to ban HIV-positive people from bathhouses.

Activists like Xiao Gang think sham nuptials signal that the country needs to have a bigger discussion about the pressures around marriage. In a recent interview, another gay activist and scriptwriter Cheng Qingsong called for the inclusion of gay people in popular television dating show "You Are the One”.

While Chinese society leaves some space for the expression of gay identities, Cheng said, the lack of legislation protecting gay rights combined with popular attitudes can put gay relationships out in the cold.

“No gay men we interviewed ever told anyone about the abuse they were experiencing,” he says.

“They had very limited sources of emotional support.”