Mr Hunt, who has overseen the country's response to COVID-19, has been in parliament for two decades. 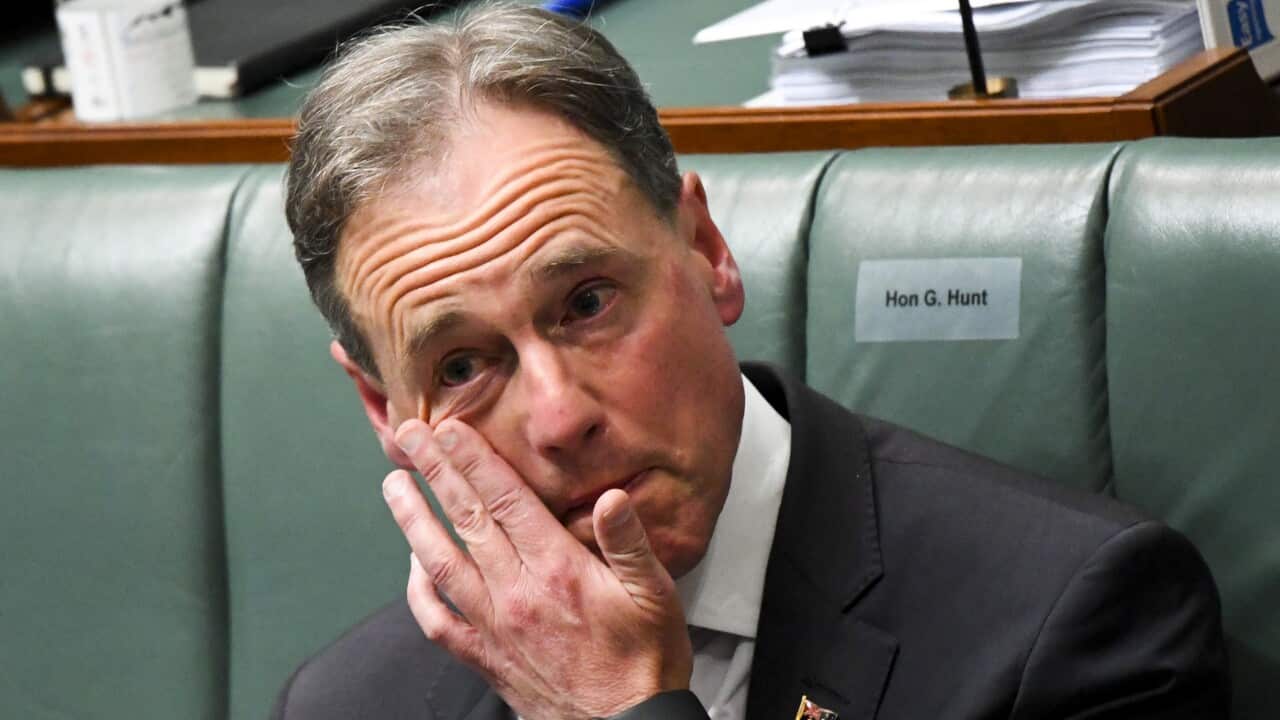 Greg Hunt said he would be leaving parliament after 20 years. Source: AAP

Federal Health Minister Greg Hunt has announced he will not recontest his seat at the next election.

Mr Hunt announced his retirement at the end of Question Time on Thursday afternoon after informing Prime Minister Scott Morrison and his electorate chairman of his decision call time on his two decades in parliament earlier that day.

He said it was time to return to his family of wife Paula, Poppy, James, Elsa and Charlie the cavoodle but, quoting from his "favourite film", The Princess Bride, there was still a country to protect.

"There is a lot more to do over the last six months, to paraphrase my favourite film the Princess Bride ... there is a country to protect, medicines to list, a budget to prepare and an election to win.

"But when all of that is done, it will be time to come home."

"Earlier today, I spoke with the prime minister and my electorate chairman and I informed them I would not be contesting the next election," Mr Hunt said.

Mr Hunt also suggested a woman should succeed him in his division.

"I think it is time ... subject to the will of the local branch members for a strong, brilliant woman to be the Liberal candidate for Flinders," he said.

"And I'm very confident about the future of this great party, and this coalition."

Mr Hunt's ministerial career started in 2013 and has included roles at environment, industry and sport, and the 56-year-old has overseen Australia's response to the COVID-19 pandemic.

After Mr Hunt received an ovation, Mr Morrison said he was "very sad to lose an incredibly great member" of his team.

Mr Morrison said: "I could not be more grateful to the Minister for Health, but more significant to Paula, Poppy and James, for allowing Greg to be here and serve in this place and serve as part of our team here, particularly over these last three years.

"Over the course of these, particularly last two years, I have relied on no-one more than Greg and Josh as we have sought together with the deputy prime minister and his predecessor, to navigate our way through this very difficult time.

"I could have thought to have a no more brilliant mind, no greater friend, no person of great integrity, but most importantly, someone with a massive heart."

Previously awarded the title of Best Minister in the World, Mr Hunt has held the seat of Flinders in Victoria for 20 years.

Mr Hunt was first elected to the seat in 2001, having previously worked as a senior adviser to then opposition leader Alexander Downer.

He took the shadow environment brief between 2007 and 2013, and became minister following the election success of Tony Abbott.

In this role, he was given the accolade of "Best Minister in the World" at the 2016 World Government Summit in Dubai in recognition of his efforts to reduce carbon emissions.

In response, then Labor leader Bill Shorten was reported to have said: "I'd like to see what competition he was up against."

A six-month stint as minister for industry, innovation and science was followed by a move to his current role as Health Minister.

He, and the Morrison Government, faced criticism from the states and federal opposition on the vaccine rollout but both defended their record.

Speaking after a once-promised target of four million vaccinations was missed in April this year, Labor's health spokesman Mark Butler said: "The Morrison Government is making a mess of this vaccine rollout and Australians expect and deserve clearer answers on when they are going to get the vaccine."

He claimed Victoria was forced into "some sort of egg and spoon thing" in the vaccine race, but Mr Hunt said the priority was in areas where help was most needed.

Treasurer Josh Frydenberg, who succeeded Mr Hunt in the environment role, paid tribute to his cabinet colleague on ABC Radio National Breakfast on Thursday and commended his efforts in tackling COVID-19.

He told the program: "He's my best mate in the parliament, I was best man at his wedding, we're godfather to our respective children.

"He can be very proud of his achievements in public life, including overseeing very significant investments in mental health, in listing new drugs on the PBS, in medical research.

He is the latest Liberal MP to announce his plans to step down following Christian Porter saying he would be stepping down on Wednesday.