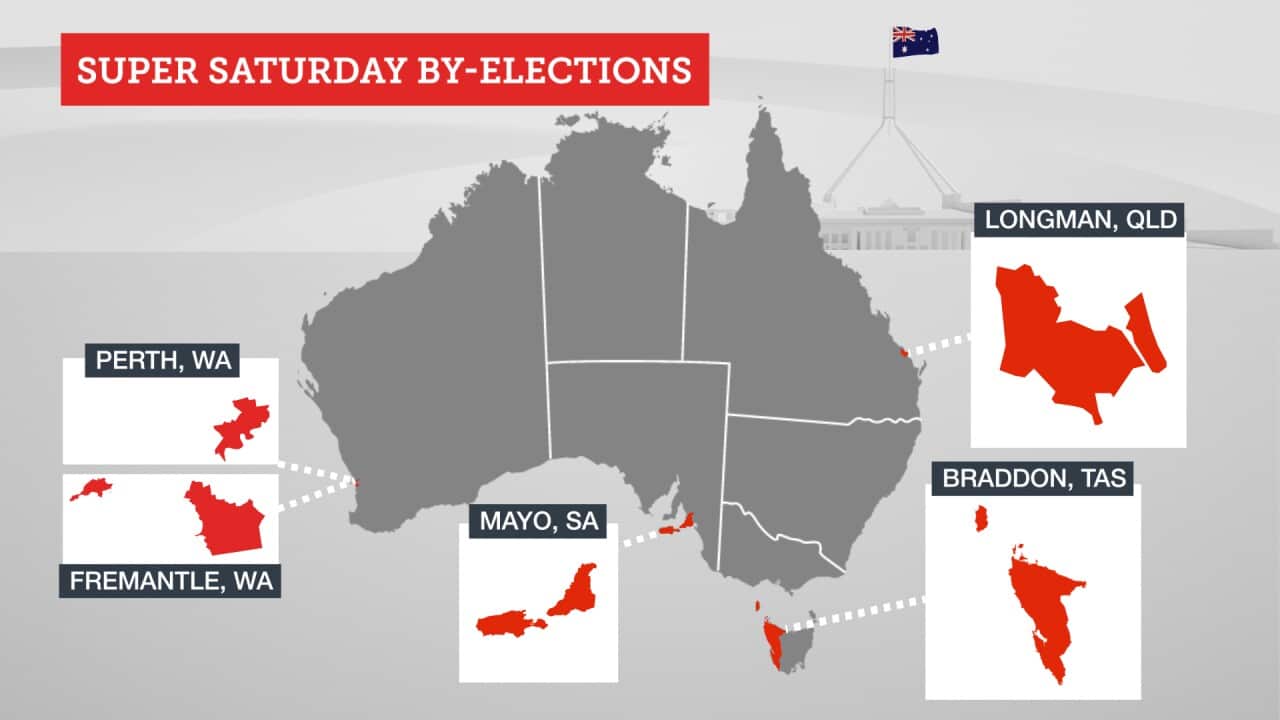 Super Saturday could change the political tide, with a history-making five by-elections in Braddon, Fremantle, Longman, Mayo and Perth.

Published Thursday 26 July 2018
Five by-elections across Australia on July 28 - dubbed Super Saturday - could shake up federal politics. Here’s what you need to know.

Why is it history-making?

* Five is the highest number of federal by-elections held on a single day.

Advertisement
* A government has not won a seat from an opposition in a by-election since 1920.

What is the political context?

* Labor is leading the Liberal-National coalition in national opinion polls.

* Bill Shorten is trailing Malcolm Turnbull in personal popularity and as the preferred prime minister.

* The Coalition is emphasising personal and business tax cuts, action on power prices and the benefits of a stronger economy.

* Labor says the coalition is wasting taxpayers' money on business tax cuts (rather than spending it on schools, hospitals, roads and pensions) and many workers are unfairly missing out on the benefits from the economy.

* One Nation (only running in Longman) is seizing on economic disenchantment, concerns over immigration and a deficit of trust in mainstream parties.

* There is residual anger over the dual citizenship crisis which triggered four of the five by-elections.

Australians go to the polls this weekend for Super Saturday. Source: SBS News

* Ahead of the by-elections the House of Representatives comprises: 76 Coalition, 65 Labor, 1 Greens, 1 Katter, 2 Independents, 5 vacancies (four Labor, one Independent).

* The Liberal Party is running in three of the five by-elections (Longman, Mayo and Braddon), while Labor is contesting all five.

* The Centre Alliance's Rebekha Sharkie is expected to retain Mayo.

* Longman and Braddon will be tight contests and could be Liberal gains with the right preference flows.

* Perth and Fremantle should be easy Labor retains.

What are the consequences?

* Labor losses would not only shore up the government's numbers in parliament but put pressure on Bill Shorten's leadership. Leadership rival Anthony Albanese has been maintaining a high profile.

* If Malcolm Turnbull's strategists feel the tide is turning towards the Coalition, an early election before Christmas could be on the cards.

* Labor wins will reinforce the prime minister's current view that the election should be put off as late as possible (April-May 2019) and more work is needed to build the government's stocks.

Follow live coverage of Super Saturday on the
SBS News website
and the SBS News app on
iOS
and
Android
.