The family of seven-year-old Julian Cadman has said he is missing and his mother has been hospitalised in Barcelona after the driver of a van ploughed into crowds at Las Ramblas in the heart of the city.

A seven-year-old boy who became separated from his mother is missing after the Barcelona terror attack, his Australian family say.

Sydney man Tony Cadman has posted on Facebook that his grandson Julian Cadman is missing and the boy's mum Jom is in a serious but stable condition in hospital.

Young Sydney bank worker Suria Intan is in a serious but stable condition at the Hospital Clinic in Barcelona.

Ms Intan works for the Commonwealth Bank and is heavily involved in the Hillsong Church. 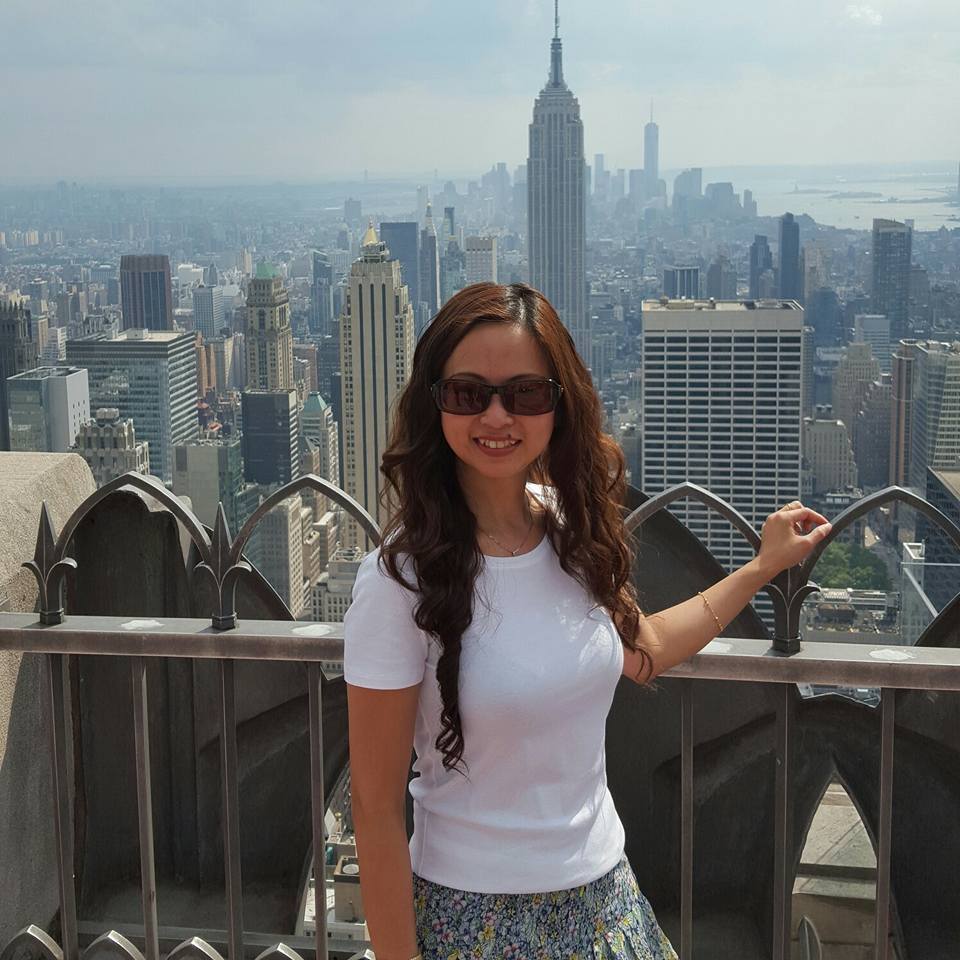 Foreign Minister Julie Bishop earlier said of the eight Australians affected by the terrorist attack in Las Ramblas, four have been injured, three have required consular support and one is unaccounted for.

"Of the four injured, that includes one woman, who is from New South Wales in a stable condition, but was seriously injured," Ms Bishop told reporters Friday afternoon.

"A second woman, also from NSW, is in a serious condition in hospital. She was travelling on a British passport." The path of the van in Barcelona
Google

She also said two young men from Victoria were injured, but have been discharged from hospital after treatment.

"I have spoken to the Spanish ambassador to Australia and conveyed to him the condolence of the Australian Government and the Australian people and reaffirmed our commitment to stand with Spain at this terrible time."

She said travel advice has been updated, and that travellers should take caution.

"Again, I remind Australians that if you are worried about loved ones or families, please try and get in touch with them directly, but if you are unable to do so, and you are calling from Australia, the number is 1300 555 135." 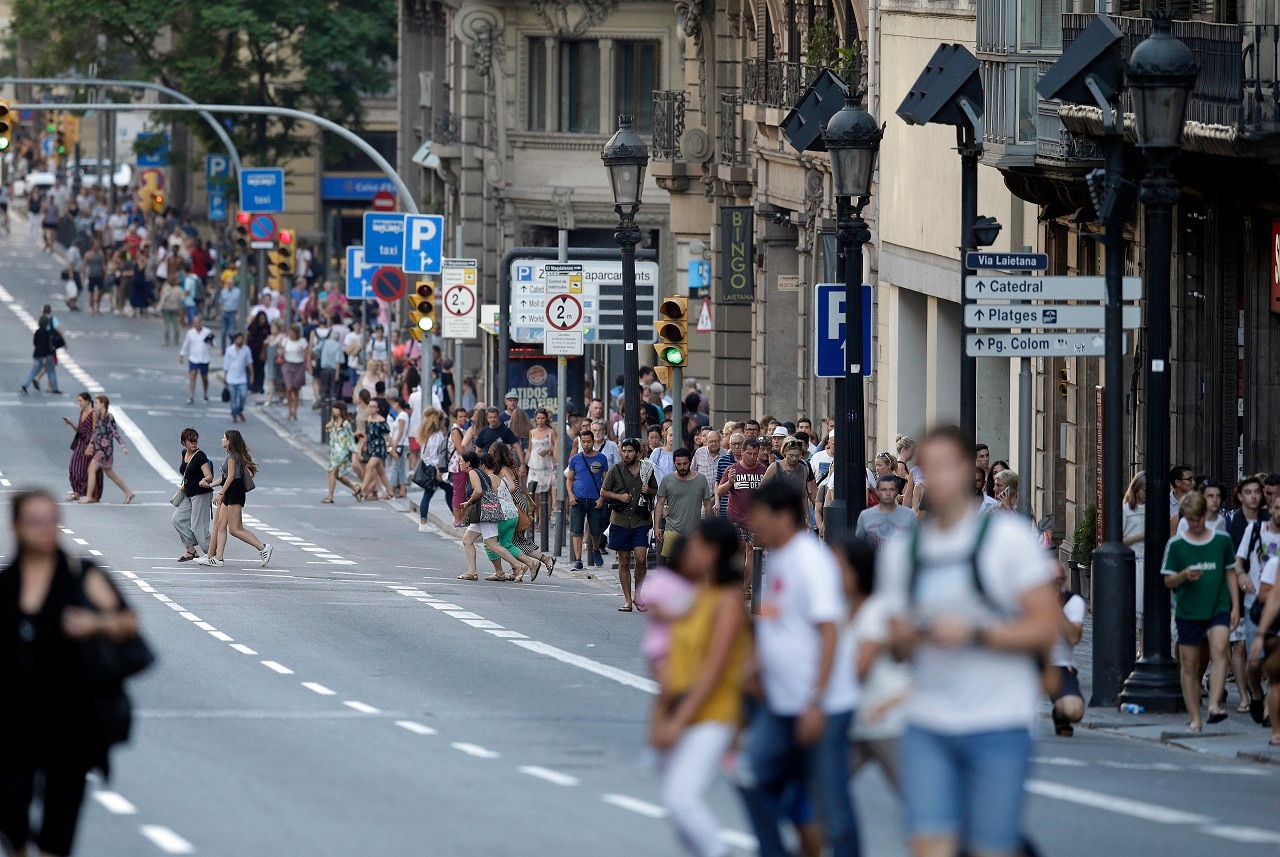 People walk down a main street in Barcelona, Spain, after the terror attack
AAP

Sixteen people were killed Thursday when a driver deliberately slammed a van into crowds on Barcelona's most popular street in an attack claimed by the IS.

Police and the Catalonian Interior Minister said they had arrested three suspects after the assault, the latest in a wave of vehicle rampages across Europe in recent years.

The IS propaganda agency Amaq claimed that "soldiers" from the jihadist group carried out the attack, according to the Site Intelligence Group which monitors Islamist websites.

Witnesses told of the panic unleashed in an area thronging with local residents and tourists in Spain's second biggest city, as world leaders united in condemning the carnage.

"We can confirm there are 13 dead and more than 50 injured," regional interior minister Joaquim Forn said on Twitter. Belgium said one of its nationals was among the dead.

Twenty-six French citizens have been injured, with at least 11 of them in serious condition, the French Foreign Affairs Ministry says.

The statement says French Foreign Affairs Minister Jean-Yves Le Drian will visit Barcelona on Friday to visit the victims, and that the French consulate in Barcelona is in contact with Spanish authorities.

One of the suspects was named by the police union as Driss Oukabir, but there were no further details and police denied earlier reports a perpetrator was holed up in a bar.

The famous Las Ramblas is one of Barcelona's busiest streets, lined with shops and restaurants and normally packed with with tourists and street performers until well into the night.

Police said there had been a "huge collision" between a van and pedestrians on the thoroughfare and a police source said officers were seeking a total of two suspects. 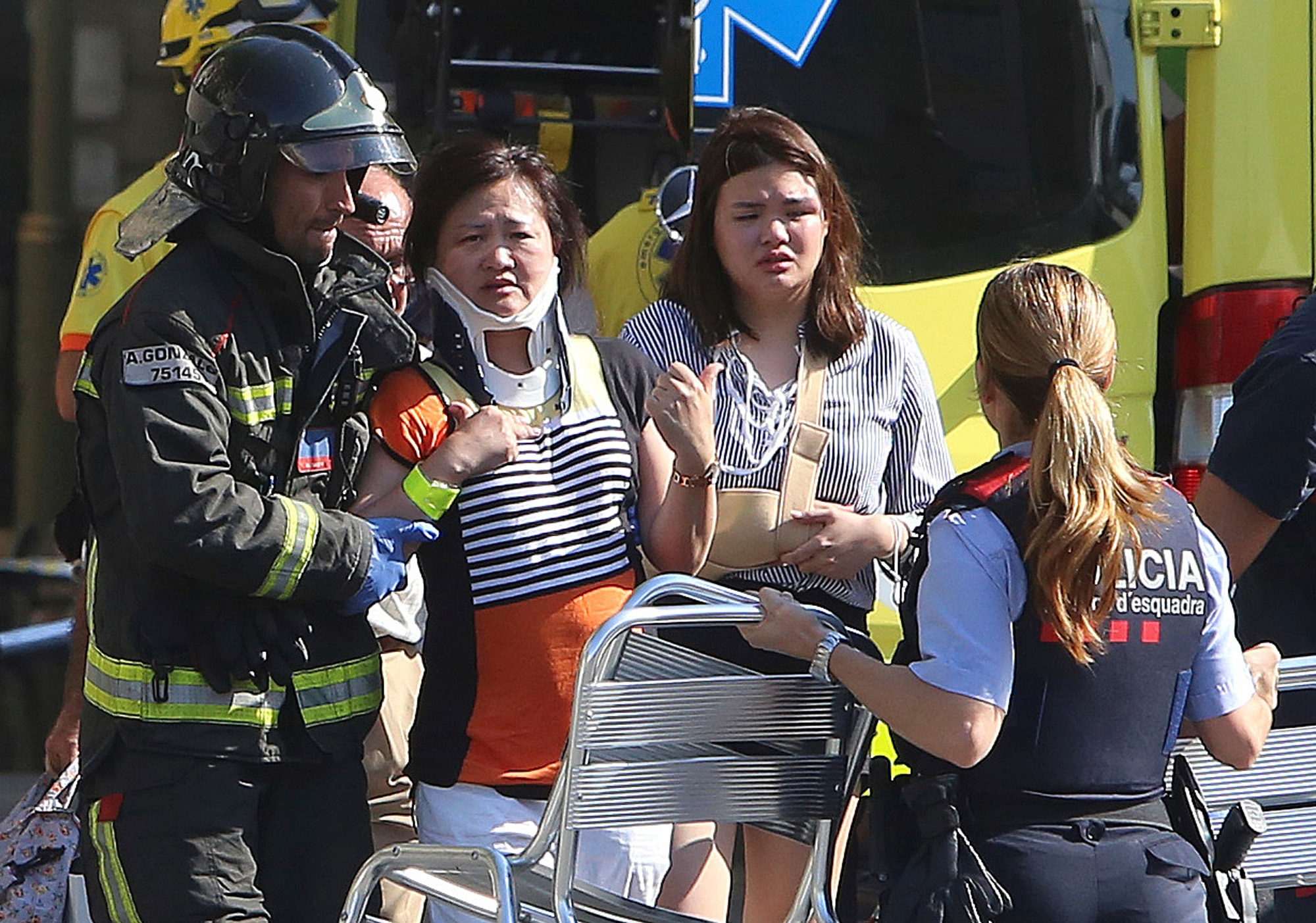 Spain's royal family condemned the assault in unusually strong terms, vowing that their country would not be "terrorised" by extremists.

'Bodies on the ground'

Witnesses told of scenes of horror, with bodies strewn along the boulevard as others fleeing for their lives.

"When it happened I ran out and saw the damage," local shop worker Xavi Perez told AFP.

"There were bodies on the ground with people crowding round them. People were crying. There were lots of foreigners." 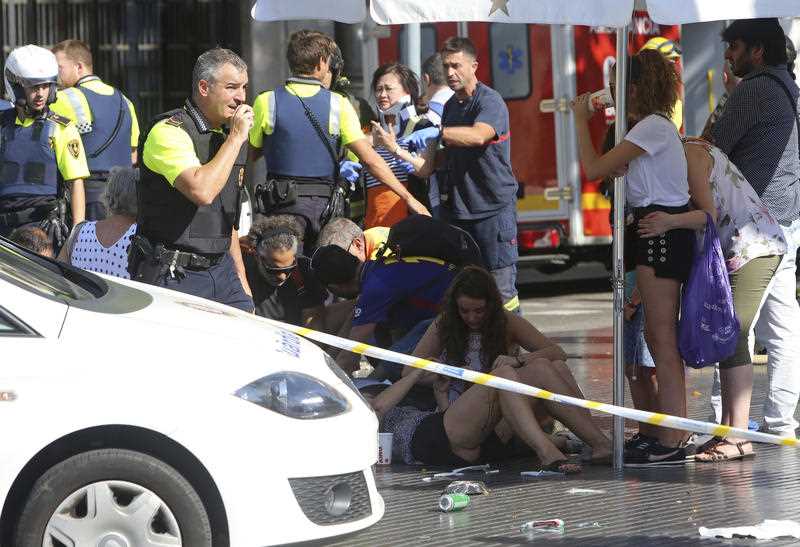 Witness Aamer Anwar told Britain's Sky News television that he was walking down Las Ramblas, which he described as "jam-packed" with tourists.

"All of a sudden, I just sort of heard a crashing noise and the whole street just started to run, screaming. I saw a woman right next to me screaming for her kids." 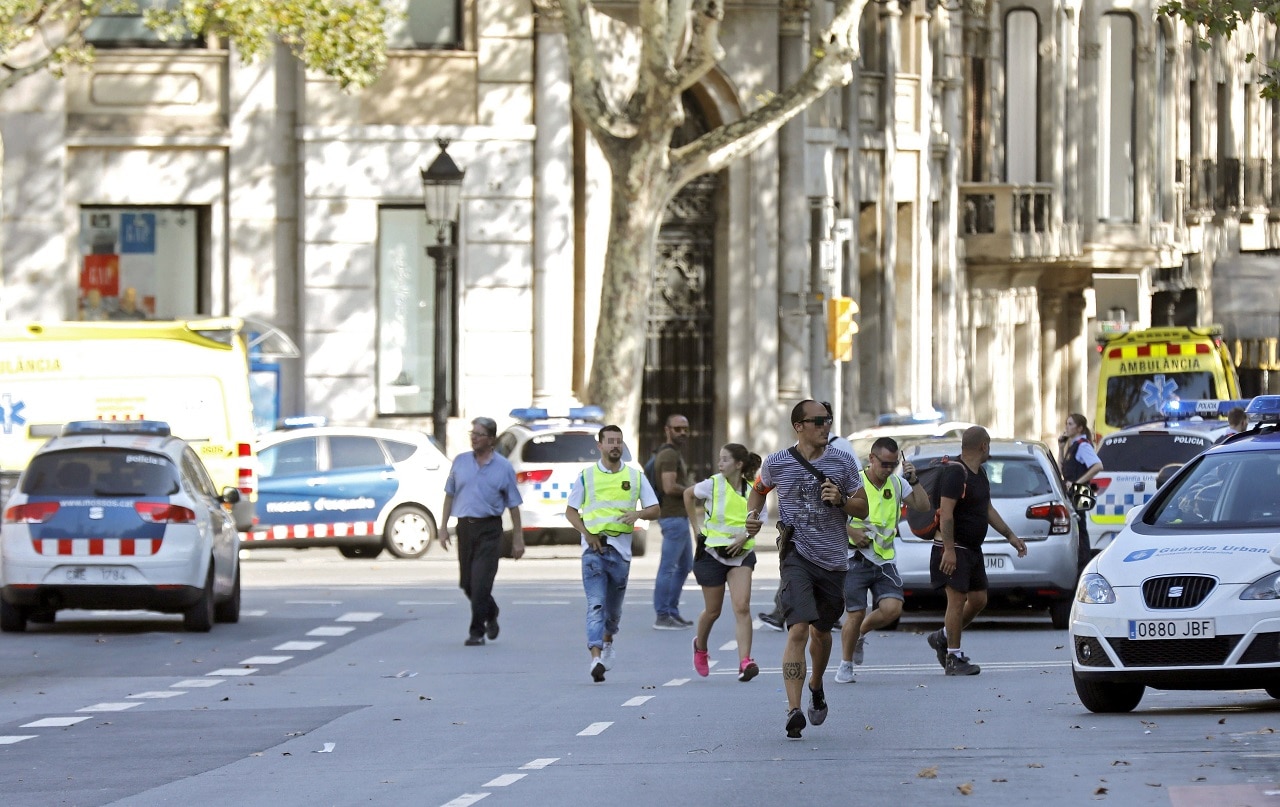 Mossos d'Esquadra Police officers and emergency service workers near the site where a van crashes into pedestrians in Las Ramblas, downtown Barcelona,
AAP

Police in the resort town of Cambrils, located about 100 kilometres south of Barcelona, say those behind a van attack which left six people injured were carrying explosive vests, according to the Associated Press.

A fifth attacker died after earlier being injured in the operation.

Police were preparing to complete controlled explosions and called for calm in Cambrils ahead of the operation.

Spain had so far been spared the kind of extremist violence that rocked nearby France, Belgium and Germany.

But it was hit by what is still Europe's deadliest jihadist attack in March 2004, when bombs exploded on commuter trains in Madrid, killing 191 people in an attack claimed by Al Qaeda-inspired extremists.

Ethan Spibey, a charity director on holiday in the city, said he and several others had locked themselves in a nearby church.

"All of a sudden it was real kind of chaos... people just started running screaming," he told Sky. "There was kind of a mini stampede."

Tom Gueller, who lives on a road next to Las Ramblas said he saw the van speeding along the boulevard.

A Greek diplomat in the city said three nationals had been wounded -- a woman and her two children.

"The United States condemns the terror attack in Barcelona, Spain, and will do whatever is necessary to help," US President Donald Trump tweeted.

France's President Emmanuel Macron -- whose country has witnessed a series of bloody jihadist atrocities including a truck rampage in Nice in July 2016 that killed 86 people -- said his thoughts were with the victims of the "tragic attack".

A spokesman for German Chancellor Angela Merkel condemned the "revolting attack" and British Prime Minister Theresa May said on Twitter that London "stands with Spain against terror".

The Nice carnage and other assaults including the 2015 Paris attacks on nightspots in the city were claimed by the Islamic State.

Deeply saddened by the attack on our city. All our thoughts are with the victims, their families and with the people of Barcelona.

In another deadly vehicle attack in December, 12 people were killed when a man driving a truck ploughed into a crowd at a Berlin Christmas market.

Spain has emerged as a potential target for jihadists, with extremist websites mentioning it for historical reasons, since much of its territory was once under Muslim rule.

But they publicise every arrest of alleged jihadists, most of them detained for propaganda, recruitment for extremist groups or "glorifying terrorism."

According to the interior ministry, more than 180 "jihadist terrorists" have been arrested since 2015.