Ben Roberts-Smith's barrister says the VC winner and a female lawyer involved in his defamation case are "not in a relationship full stop".

Victoria Cross winner Ben Roberts-Smith's legal team has categorically denied the former soldier is in a relationship with a female lawyer involved in his defamation action against media outlets over claims of war crimes in Afghanistan.

Mr Roberts-Smith is suing three newspapers owned by Nine over media reports from 2018 related to his SAS tours in Afghanistan, arguing they painted him as a war criminal who breached the moral and legal rules of military engagement.

He is also suing over a claim that he assaulted a woman inside a Canberra hotel room.

He denies all the claims made against him, while the publishers are running a truth defence.

Mr Roberts-Smith has also launched civil proceedings against his ex-wife Emma Roberts and that matter was heard for case management before Justice Robert Bromwich on Wednesday. 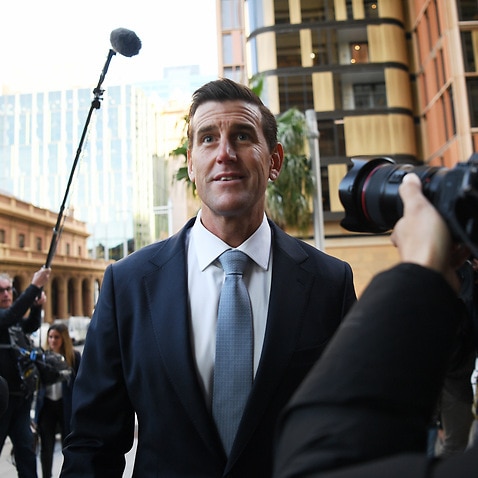 The hearing was told that Justice Bromwich had become aware of media reports of "rumour and innuendo" surrounding Mr Roberts-Smith and whether he was in a personal relationship with a female lawyer, not named in court, linked to the deposition of an affidavit.

The court was told it was a potentially "embarrassing" situation and concerned whether a "purely professional relationship" existed between Mr Roberts Smith and the solicitor.

Justice Bromwich said he wasn't aware of the article until he came across it himself, describing the media report as "something I should have been told about".

"I'm surprised this wasn't raised directly with me," he said.

After a short adjournment to seek instructions, Mr Roberts-Smith's barrister, Arthur Moses, told the court no relationship existed between Mr Roberts-Smith and the solicitor.

"I'm going to say this ... the applicant and the deponent are not in a relationship full stop," Mr Moses told the court.

"Your Honour raised it with me in open court, the solicitor was in a closed court dealing with national security information before Justice Besanko, I had no notice of Your Honour raising that issue with me."

The court heard that the article raised by Justice Bromwich earlier in the day may have been a recent Australian Financial Review gossip column.

"It sought to raise a number of assertions in relation to a solicitor ... acting for the applicant," Mr Moses said of the AFR article. Mr Moses hit out at media reports that sought "to cast aspersions on the integrity" of lawyers acting for a party in the high-profile case.

"That would constitute a potential harassment and belittling of a female practitioner," he said.

"If someone wants to suggest that there has not been full and frank disclosure in an affidavit ... that allegation can be made."

He said the issue had become the subject of extensive media reporting on Wednesday causing "embarrassment and concern to an officer of this court".

The case management hearing was told the action against Ms Roberts revolves around obtaining an order for her to deliver up materials, and to provide an affidavit.

It heard that the action arose after a "notice to produce" was issued in the media defamation case asking for material that the applicant says came from his emails.

"We need to know what occurred with that information," Mr Moses said.

Mr Roberts-Smith launched his defamation case in 2018 following a number of media reports he says accused him of murder during his 2009 to 2012 tour of Afghanistan.

The defamation trial, currently in its first week, was adjourned for the day on Wednesday and will resume before Justice Anthony Besanko on Thursday.

The former SAS corporal is expected to be the first witness to be called.