Supporters of about 120 detainees held in a Brisbane hotel hope to escalate their protests over the weekend and have vowed to block access.

A blockade at a Brisbane hotel will ramp up over the weekend, supporters of detained asylum seekers have vowed.

A small group of die-hard protesters blockaded the Brisbane hotel on Friday, accusing the government of seeking to silence detained asylum seekers by moving them.

Supporters of about 120 detainees are vowing to mass in the exits to prevent access to the Kangaroo Point Central Hotel.

Two people were charged on Friday evening after a night-time operation to prevent the removal of asylum seekers from the hotel. The man and woman are accused of jumping on the roofs of parked cars during the operation, during which people used cars to block the hotel driveways to prevent any of the 120 detainees from being moved. Police and protestors are seen outside the Kangaroo Point Central Hotel in Brisbane, Friday 12 June.
AAP

Protesters were seen screaming at police about the detention of 120 men housed at the hotel and were seen searching trucks and other vehicles leaving the hotel precinct to ensure no asylum seekers were inside.

Protest numbers dwindled throughout the day, with 20 to 30 people on site according to police but organisers are hopeful of a strong turnout on Saturday.

Protesters claim authorities are intent on relocating asylum seekers who've been in long-term detention at the hotel and have staged a series of balcony protests.

Brisbane City Greens councillor Jonathan Sri says protesters will continue their blockade into Saturday when a large rally is planned outside the hotel despite coronavirus warnings by the premier.

"I think if the premier is comfortable opening up schools and shopping malls then a few people spaced out on a road is probably not that high a risk," Mr Sri told AAP on Friday.

"The bigger risk is the mental health of people in detention." 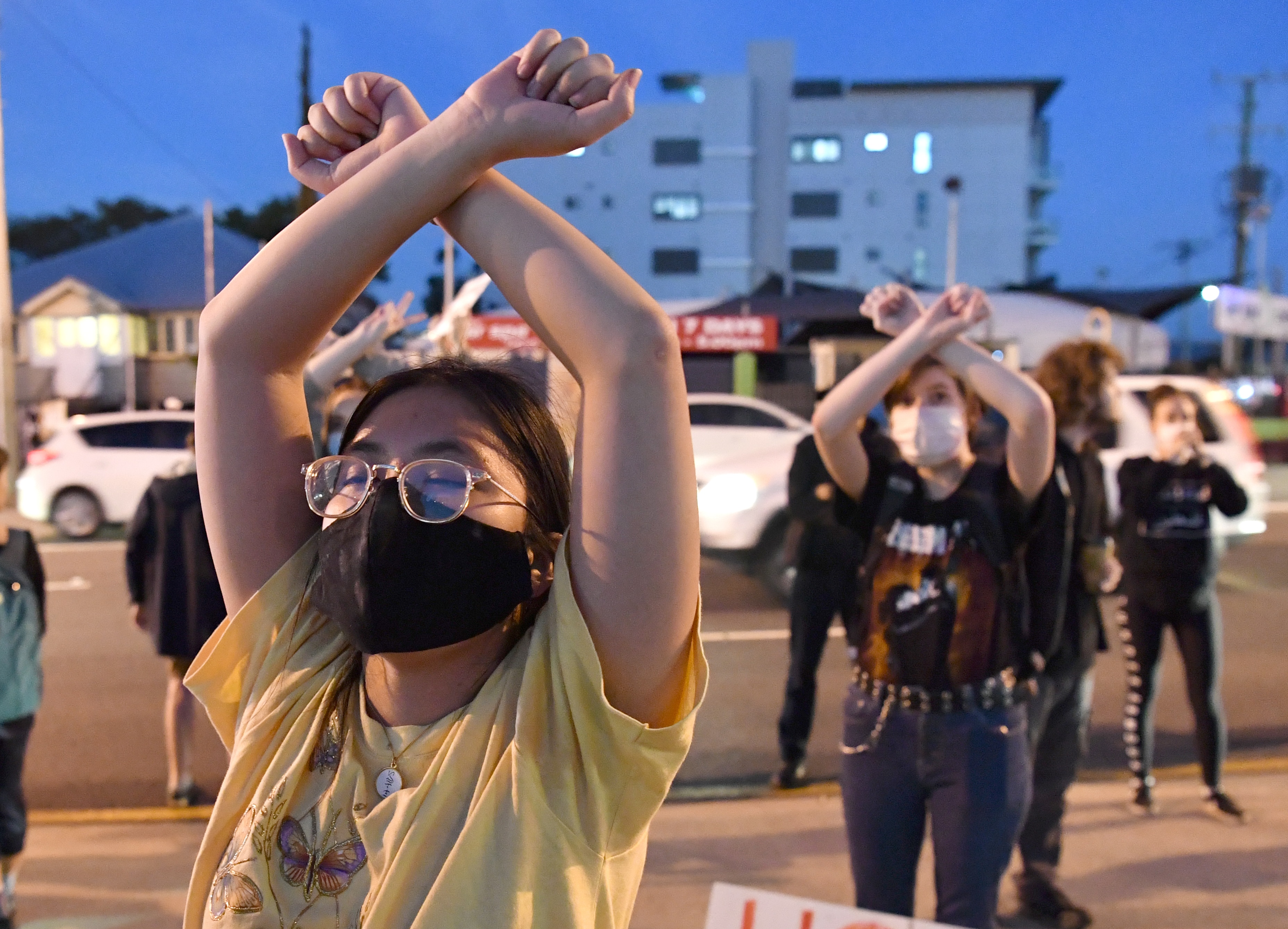 Premier Annastacia Palaszczuk has warned people should not attend Saturday's free-the-refugees rally due to coronavirus fears.

Refugee Solidarity Brisbane/Meanjin supporters have been filming their interactions with police and uploading footage on Facebook, calling for as many people as possible to go to the hotel.

"We need as many people to get here as soon as possible. This is an urgent call to action," a woman who posted the video on the group's Facebook page said.

"We're not going anywhere. We're going to hold this fort until, hopefully, for another week's time."

One detainee at the Brisbane hotel told the ABC the protesters intervened physically to prevent his transfer to the Brisbane Immigration Transit Accommodation Centre at Pinkenba on Thursday night.

The man, identified only as Farhad, said he was told to pack his things because he was to be moved.

When he asked why he was being transferred, he said he was told it was because protesters had mentioned his name.

"I prepared and packed everything. These protesters, they jump in and stop the car (from) taking me back," he said on Friday.

Farhad believes authorities will try to move him again and that he's being singled out because he's spoken to the media about the situation he and about 120 others are in.

"It was just me. I do believe the reason is in my case being outspoken and talking to the media, and trying to show what is the reality of this system and how we get treated."