The last male northern white rhino on the planet is going to die with only his two direct descendants remaining, but experts are hopeful that the subspecies population may be restored through IVF.

The last male northern white rhino in the world is gravely ill, increasing fears the species is closer to extinction.

Sudan is 45-years-old (about 90 human years) and lives at Kenya's Ol Pejeta Conservancy with two other female northern white rhinos – Fatu and Najin – his direct descendants.

They are the last rhinos of this kind in the world and the fate of the subspecies lies in the female's ability to conceive.

Sudan's health is rapidly deteriorating after he developed an infection at the back of his right leg in 2017. Since then he has battled further infections which have taken longer to recover from. "Everything possible is being done to help him regain his health, we are very concerned about him," a spokesman for the Ol Pejeta Conservancy said.

"He's extremely old for a rhino and we do not want him to suffer unnecessarily."

The rhinos arrived at the conservancy in 2009 from Dvur Kralove Zoo in the Czech Republic. On February 28, 2018, Sudan's poor health was revealed to the world.

But while the conservancy says Sudan's days are numbered, there is still some hope for the northern white rhino's population. 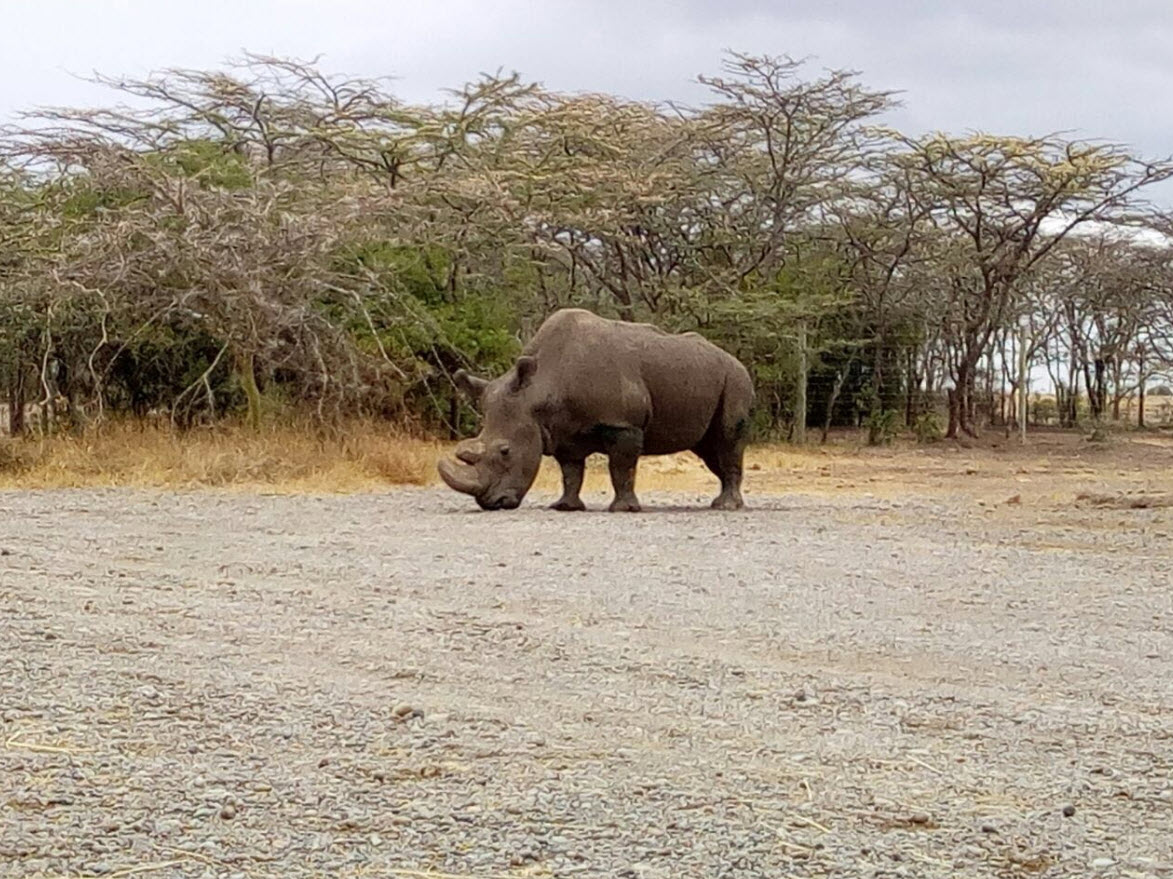 Can the northern white rhino population be saved?

While Sudan's future is bleak, the Conservancy holds hope for his legacy and that the subspecies might be restored through IVF (in vitro fertilisation).

Last year the conservancy's CEO Richard Vigne said IVF for the northern white rhino would be challenging, costly and controversial but it was considered the "last option" to save the subspecies.

The Conservancy's vet Dr George Paul told CNN Sudan was considered "too old" to breed naturally and his sperm levels were too low.

"Sudan is currently old and may not be able to naturally mount and mate with a female," he said.

Najin and Fatu have both been unable to breed naturally due to several issues including their age (Najin is 25 and Fatu is 15), the rhinos typically start to breed aged six. 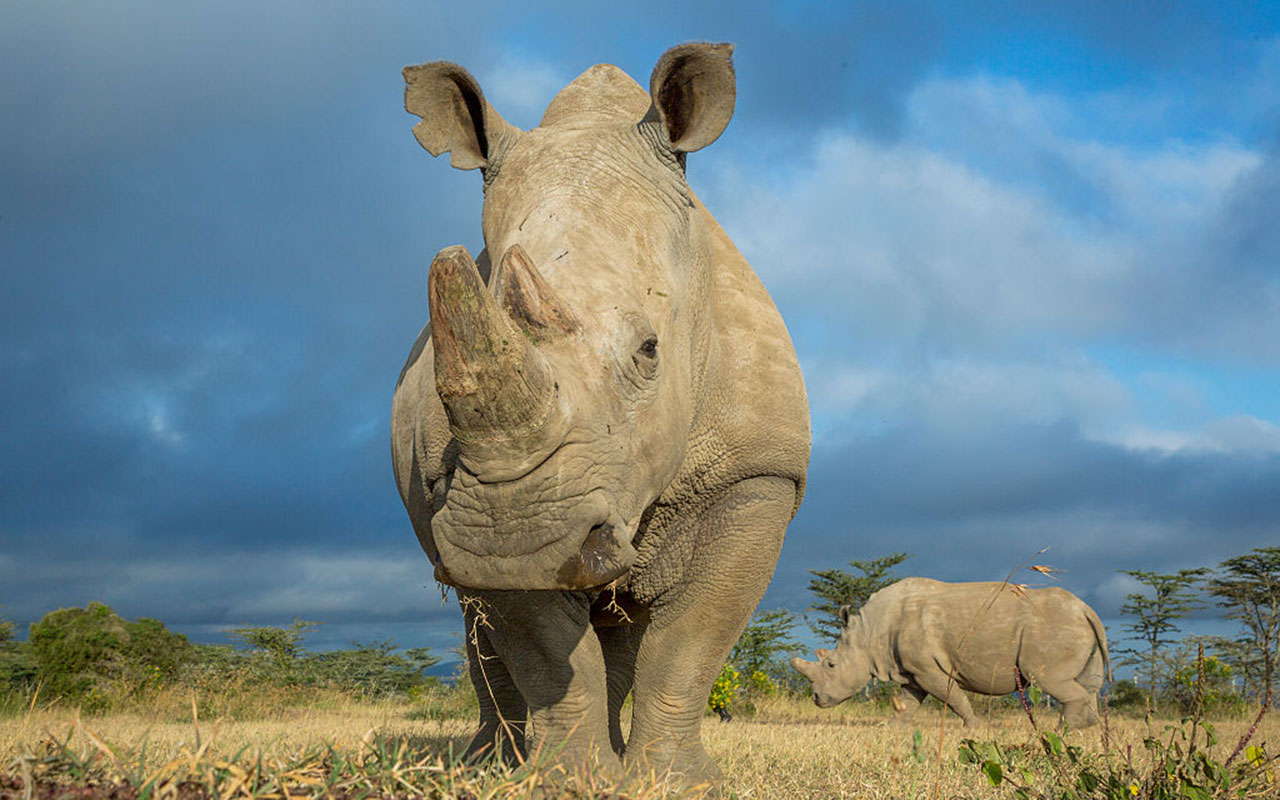 The Conservancy is collecting donations towards their IVF research and investigating new assisted reproductive techniques for large mammals.

Researchers have been investigating ways to use IVF on Najin and Fatu as well as female southern white rhinos, with Sudan's stored sperm.

The IVF process would be conducted using sperm from dead rhinos that are currently being stored in Berlin. 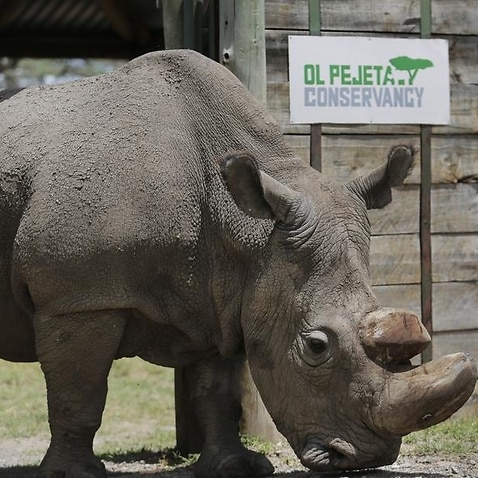 The eggs would be extracted by surgery from the remaining females (Fatu and Najin) at the Conservancy.

Dr Paul told CNN other countries had seen success with embryo transfer in different rhino species, so it appeared to be the most promising method.

While hope remains for the rhino population after Sudan dies, some experts feel the efforts were unlikely to rebuild a viable population.

It's hoped IVF will allow the establishment of a herd of ten northern white rhinos after five years.

But the Leibniz Institute for Zoo and Wildlife Research, who was involved in the IVF efforts, said financial support was the biggest challenge in the project.

"To win this run against time it is very crucial to find major funds as quickly as possible," a spokesman said last year.

Critics of the project feel funding raised for Sudan and the northern white rhino would be better directed at species that have a higher chance of recoveries – such as Asia's Sumatran and Javan rhinos, which have fewer than 100 of each remaining. 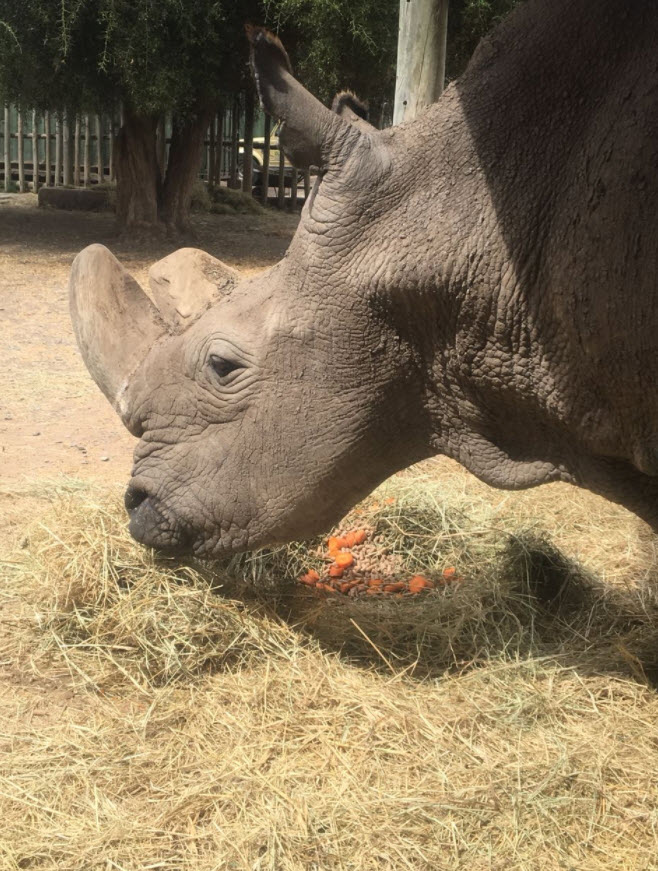 Sudan's health has been a concern since he developed a leg infection in 2017.
Ol Pejeta Conservancy

What about the southern white rhino?

There are currently about 20,000 southern white rhinos in Africa (compared to three northern), and is considered a conservation success story.

The rhinos were brought back from the brink of extinction after more than a century of successful protection and management, according to WWF.

The southern white rhino is now considered "Near Threatened" and is the only rhinos not to be considered endangered.

Compared to the southern, the northern white rhino's story is far bleaker.

According to WWF, as recently as 1960 there were 2000 northern white rhinos remaining in the wild. But due to poaching their populations have led to extinction. "They had the bad luck to be living in war zones," Jo Shaw, an African rhino expert for WWF said.

Since being rehomed at the conservancy, Sudan, Fatu and Najin have lived under the 24-hour protection by armed guards, rangers and neighbouring communities to prevent poaching.

While Sudan was written off as unlikely to recover, earlier this week he surprised his keepers by taking a walk and a mud bath.

The conservancy teamed up with the dating app to announce a campaign to prevent northern rhino extinction.

"The fate of my species literally depends on me," Sudan’s profile read.

"I perform well under pressure. I like to eat grass and chill in the mud… 6 ft tall and 5,000lbs if it matters." Tinder users in 140 countries were able to swipe Sudan's profile as if it were a potential match.

If they swiped right they were greeted with a donation link.

"This is a human failure of epic proportions, thanks to our greed and irresponsibility, a species is one significant step closer to extinction," an Ol Pejeta campaign to help Sudan reads.