Experts say the "horrific" spate of violence is no longer shocking as the Latin American country, hit hard by the coronavirus pandemic, continues to negotiate a fragile peace deal aimed at ending its decades-long civil war. 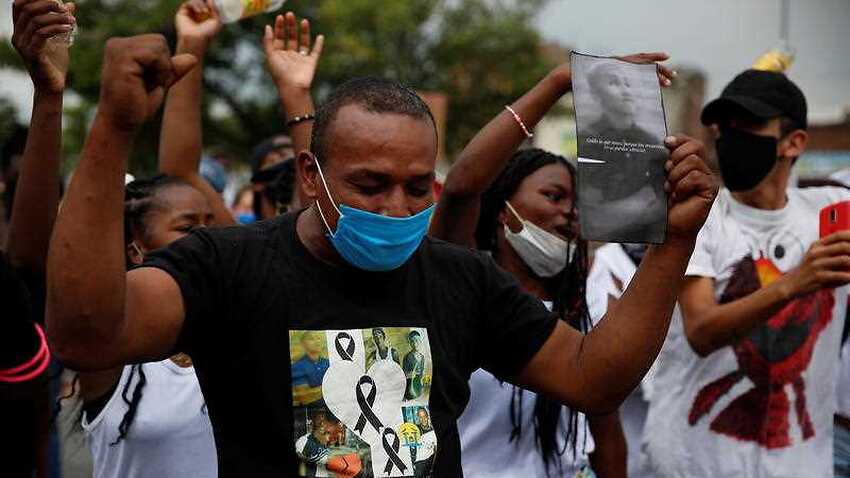 Demonstrators participate in a protest to demand justice after the massacre of five minors in Cali, Colombia, 19 August 2020. Source: AAP

For the last two weeks, Colombia has been rocked by a wave of massacres that have killed at least 42 people, according to police.

Police officers provide security at the place where five young people were murdered the night before, in Cali, Colombia, 12 August 2020. Source: AAP

The latest killing was the ninth in two weeks and brings the death toll since 11 August to at least 42.

Alberto Posso, from Ecuador, is an economics professor at Melbourne's RMIT University, and director of the university's Centre for International Development.

He described the recent spate of violence in Colombia as "horrific" but "no longer surprising".

"Unfortunately, this is something that is not all too uncommon in the Latin American region more broadly," Prof Posso told SBS News.

"I'm afraid Colombia is having one of those common episodes in a country that is unfortunately used to violence ... I want to be more shocked."

A woman stands on a coffin during the funeral of the five young men murdered this week, in Cali, Colombia, 13 August 2020. Source: AAP

Last month, the United Nations' peace mission in Colombia said it had already documented 33 massacres since the beginning of the year. Local conflict watchdog Indepaz said as of 25 August, that number could be as high as 46.

Among the victims are more than 100 social leaders and human rights defenders, according to Afro-Colombian organisation member Danelly Estupinan, whose account was published by Amnesty International in June.

But what strikes Prof Posso is how little is known about the recent killings.

On Friday, President Ivan Duque and Attorney General Francisco Barbosa announced the arrest of two of the alleged perpetrators behind the 11 August killing of five teenage boys. A third suspect is on the run.

Mr Barbosa said the boys were murdered "in an act of total barbarism".

"It seems to me that the authorities are somewhat failing in trying to figure out what is behind this," Prof Posso said.

"To a lot of people, this ineptitude is shocking, but unfortunately it's something that is also not too uncommon in Latin America."

A young woman shouts protest slogans during a demonstration against the massacres, in Bogota. Source: AAP

What is driving the massacres?

As authorities begin an investigation, various claims are emerging as to what is driving the recent massacres.

Some local media outlets and human rights groups have reported so-called 'COVID Death Squads' are allegedly targeting those who are breaching virus restrictions during the pandemic.

Mr Duque first imposed a national lockdown to control the spread of COVID-19 in late March.

Prof Posso said while the death squad theory is "possible", he believes it is unlikely.

"I think right now, Latin America is the epicentre of the virus, and it seems like people are taking this seriously. But at the same time, the economic hardship associated with these lockdowns is generally understood," he said.

President Duque has accused armed groups financed by drug trafficking of being behind the current wave of massacres. He has been criticised for terming them "collective homicides".

It is one of the biggest spikes of violence since the signing of a peace agreement with the country's largest rebel group, the Revolutionary Armed Forces of Colombia (Farc), in 2016 that aimed to end its decades-long civil war.

Young people hold a protest banner during a demonstration against the massacres, in Bogota, Colombia. Source: AAP

"A turf war is probably the most likely thing, here," Prof Posso said. "But at this stage, it is also true to highlight that this is only speculation."

Ultimately, Prof Posso said the recent killings are taking place in a politically polarised country that is rife with inequality.

Many critics have blamed Mr Duque, who inherited the government's peace agreement deal when he took office two years ago, for not doing enough to implement it.

"This deal, from a historical perspective, was well recognised by the international community," Prof Posso said.

"The end of Farc did lead to some improvements, but there is still economic violence, a lot of social violence - and inequality that is ultimately fuelling this violence.

"Latin America is polarised when it comes to politics, and that division is right now on ice because of the pandemic. We have to remember that as long as inequality is high, these divisions are going to drive people and polarise people politically and economically in all sorts of directions."

For now, Prof Posso said a transparent investigation into the recent killings will be vital for Colombia, as a recent member of the Organisation for Economic Co-Operation and Development (OECD).

"Colombia is keen to highlight itself as a country that has graduated from developing to developed," he said.

"If it is going to do that, even amidst the situation with the pandemic, it has to show that due process is being followed.

"Then we can ask the question, is this driven by politics, or is it something else?"