In a fiery address on Wednesday, Cambodian Prime Minister Hun Sen attacked the human rights protests against him at the Australia-ASEAN summit, and pledged there will be no more pardons for political prisoners back home.

Local newspaper The Phnom Penh Post quoted the leader as saying: "When you burn my image, it means you are building more coffins" before threatening that politically sensitive prisoners behind bars may be there for "10 more years". "Hun Sen doesn't need to negotiate with the ones who are in jail. There is no need... The key is in the hand of Hun Sen, and when you burn Hun Sen's images, it is the end," The Pnomh Penh Post quoted him saying.

"(It) spells bad news for Cambodia's political prisoners – whose number rights groups put above 20 – including Australian filmmaker James Ricketson, who is awaiting trial on charges of espionage, an allegation for which no credible evidence has been presented," the newspaper said.

Mr Ricketson is facing spy charges after flying a drone over a political protest in the capital Phnom Penh last June.

In a recent statement, Mr Ricketson's son voiced his concern over the conditions of his father's imprisonment. 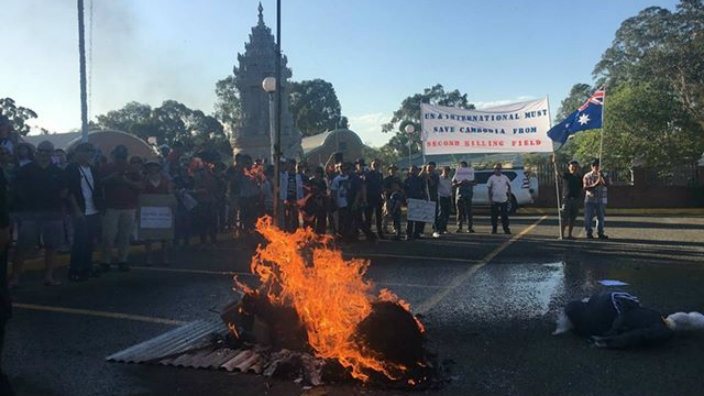 "As he's almost 70, our family is very concerned about my father's health," the statement said.

"He has already lost 10 kilograms and is currently housed in a cell the size of 16m [by] 6m with 140 other men and we're just not sure how long he can endure these conditions."

In the lead-up to his Australian visit for the ASEAN-Australia Special Summit, Hun Sen made an extraordinary threat to those planning to protest.

"If they dare make an effigy of me and burn it, I tell you in advance, I will pursue them to their homes and beat them up." But Cambodian-born Hong Lim was not deterred.

"We had two very big demonstrations against him, burning his effigy accordingly," the Victorian Labor MP told SBS News.

His likeness was also burnt at other human rights protests over his attendance at Sydney's ASEAN meeting.

'My heart goes out to him'

Cambodian Australian Vanvy Kang - who joined the protests against the Prime Minister in Sydney - said his latest threats against political prisoners highlighted what a dictator Hun Sen was.

"I think he went too far," he said. "He just thinks he can do whatever he wants to do and no-one can punish him and I think that is really outrageous."

Hong Lim has accused the federal government of not doing enough to press for Mr Ricketson's release.

"I am very concerned for him and of course, my heart goes out to him," he said. "The Australian Government has an obligation to do more. They should be hanging their heads in shame for not doing more."

A spokeswoman for Foreign Minister Julie Bishop said she had written to her Cambodian counterpart about Mr Ricketson's case and her department continued to provide consular assistance to him.