President Donald Trump railed against "angry mobs" attempting to tear down statues of Confederate leaders and other historical figures, accusing them of trying to erase US history.

President Donald Trump has used a speech on the eve of American Independence Day to criticise protesters calling for racial justice, accusing them of "a merciless campaign to wipe out our history, defame our heroes, erase our values, and indoctrinate our children".

On a day when seven US states posted a record number of new COVID-19 cases, the pandemic reached Mr Trump’s inner circle. Kimberly Guilfoyle, a senior campaign official and the girlfriend of Donald Trump Jr, tested positive in South Dakota before the event, according to Sergio Gor, a Trump campaign official. Trump Jr has tested negative, Gor said.

The event drew 7,500 people, packed tightly into an amphitheater. Many did not wear masks, defying the advice of public-health officials who have urged Americans to avoid large gatherings to slow the spread of COVID-19.

Speaking underneath a famed landmark that depicts four US presidents, Mr Trump warned that the demonstrations over racial inequality in American society threatened the foundations of the US political system.

"Our children are taught in school to hate their own country," he added. 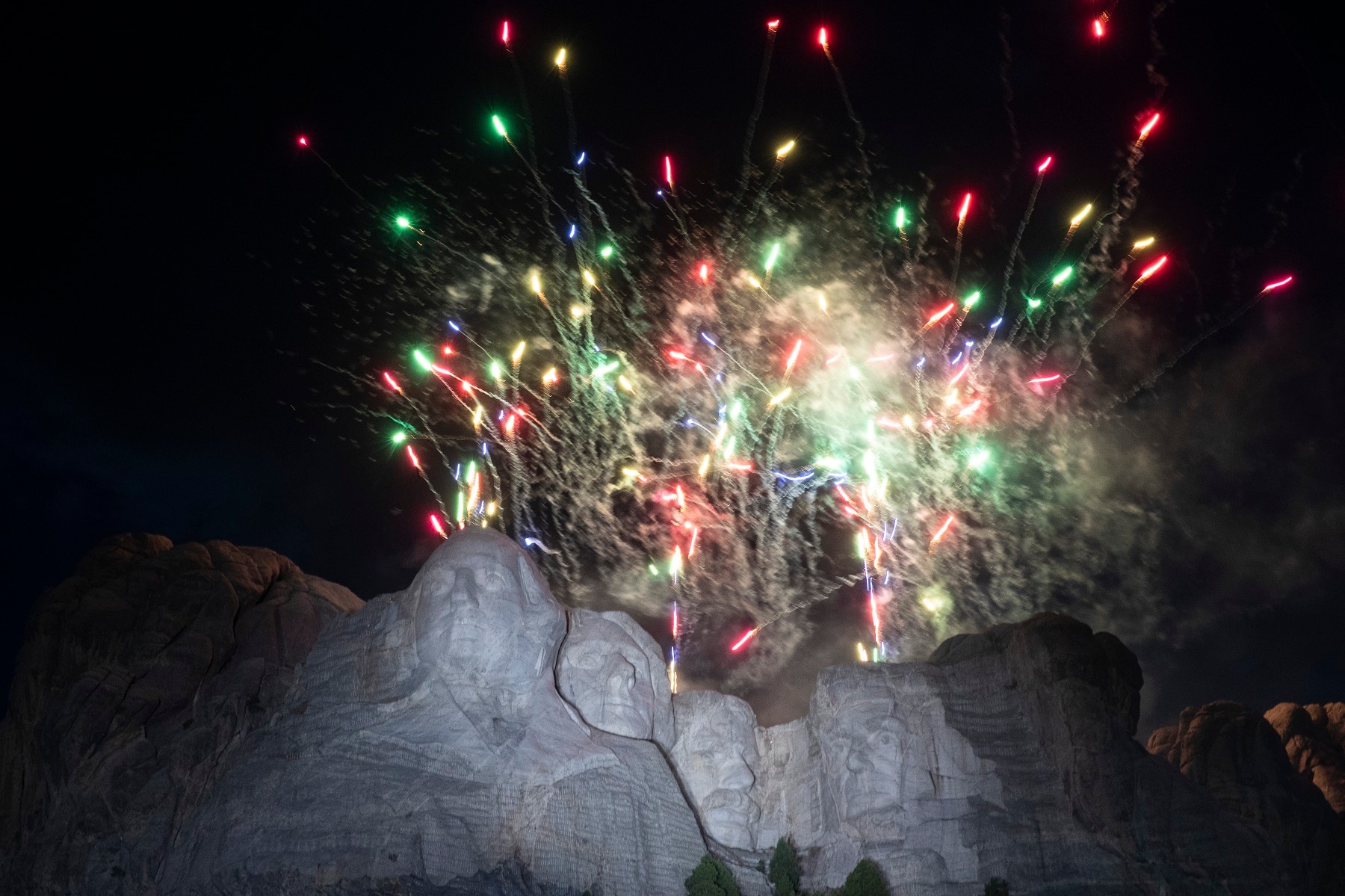 Mr Trump announced that he would create a "National Garden of American Heros", which he described as a large outdoor park featuring statues of “the greatest Americans who ever lived.” He did not provide further details.

In the nationwide unrest following the death of George Floyd, a Black man who died in police custody in Minneapolis, protesters in several cities have vandalized the statues of Confederate generals that led a rebellion against the US government during an 1861-65 civil war.

Protesters in one instance unsuccessfully tried to pull down a statue of US President Andrew Jackson outside the White House. Jackson, known for his populist policies, owned slaves and forced thousands of Native Americans from their homes.

"Angry mobs are trying to tear down statues of our Founders, deface our most sacred memorials, and unleash a wave of violent crime in our cities," he said.

"This attack on our liberty, our magnificent liberty, must be stopped, and it will be stopped very quickly."

He said he opposed what he called "far-left fascism". "In our schools, our newsrooms, even our corporate boardrooms, there is a new  that demands absolute allegiance. If you do not speak its language, perform its rituals, recite its mantras and follow its commandments, then you will be censored, banished, blacklisted, persecuted and punished."

Mr Trump has opposed proposals to rename US military bases that are named after Confederate generals and vowed harsh punishment for people who damage statues.

The evening program was not an official campaign event, but Mr Trump’s remarks touched on key campaign themes meant to energize his political base ahead of the Nov. 3 election.

"There is a new far-left fascism that demands absolute allegiance. If you do not speak its language, perform its rituals, recite its mantras, and follow its commandments then you will be censored, banished, blacklisted, persecuted, and punished. Not gonna happen to us," he said.

Mount Rushmore, which depicts US presidents George Washington, Thomas Jefferson, Theodore Roosevelt and Abraham Lincoln, has not hosted a fireworks spectacle since 2009 because of environmental concerns. Mr Trump advocated for a resumption of the display, and the state says the surrounding Black Hills National Forest has “gained strength” since then and that fireworks technology has advanced.

Native American protesters were arrested after blocking a road to the South Dakota landmark, according to video livestreamed on social media. They have criticised Mr Trump’s visit for increasing the risk of spreading COVID-19 and for celebrating US independence in an area that is sacred to them.

South Dakota, a solidly Republican state, has not been hit as hard as other states by COVID-19, but cases in Pennington County, where Mount Rushmore is located, have more than doubled over the past month.

Mr Trump will hold another celebration for the July 4 holiday on Saturday in Washington.