Former refugees from the 2006 games are among Australia’s medal hopes on the Gold Coast but if Home Affairs minister Peter Dutton has his way there won’t be more asylum seekers joining their ranks.

Athletes and officials coming to Australia for the Commonwealth Games have the right to claim asylum once they are here, say lawyers, despite warnings last month from the Home Affairs minister about breaching visa conditions.

Six-thousand-five-hundred athletes and officials are attending the Gold Coast games, including some from countries affected by conflict or where minorities are persecuted, like in the majority of the Commonwealth’s 53 member states where same-sex activity is criminalised. Is the Commonwealth still relevant? Questions as Games gear up

Forty-five people from Cameroon, Sierra Leone, Ghana, Nigeria and Bangladesh overstayed or claimed asylum after the last games in Australia, in Melbourne in 2006.

Many received refugee status including Cameroon weightlifters Francois Etoundi and Simplice Ribouem, who are both in the 2018 Australian team.

A bronze medalist in Melbourne, Ribouem took the chance to escape his conflict-riven country and seek asylum in Australia.

“There’s shooting and people get killed, we don’t have that here in Australia, you can walk where ever you want to and you are feeling free. Free like a bird, not even the bird is free like you”, Ribouem said.

Four years later he won gold for Australia at the New Delhi Commonwealth Games and only silver in Glasgow in 2014 after a controversial judging decision.

Proud to be an Australian athlete, Ribouem hopes to add a medal in the 94-kilogram category to the ones he has won for Australia.

“The Commonwealth Games is going to be an amazing event, 100,000 visitors will descend on the Gold Coast,” he said. Dutton warned athletes against breaching the terms' of their visas while in Australia for the Commonwealth Games.

"Our message to the half-a-per-cent who overstay a visa or do not act within the conditions of their visa, is that Australia has very tough laws and they need to abide by the law.”

Last week a 46-year-old Indian national was charged with offences including people smuggling, after allegedly organising travel for a fake media contingent of nine people detained at Brisbane airport who said they were accredited to cover the games.

Rwanda’s government last month threatened its team with treason charges if they fled.

“It is one-hundred per cent legal to seek asylum no matter how you arrived in Australia or your purpose for being here,” said Sarah Dale, principal lawyer at the Refugee Advice and Casework Service in Sydney.

“If it’s by plane or by sea, you have the right to seek asylum if you feel you would face serious human rights violations in your home country upon return. 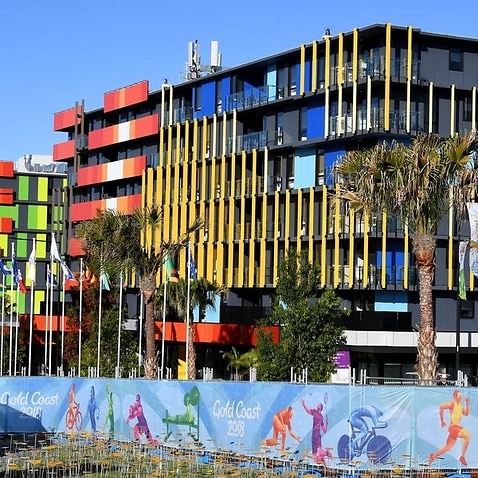 “Seeking asylum is very based on a person’s personal circumstances, that they would face personal risk, varies who and why.”

After the 2000 Sydney Olympics, 145 people reportedly overstayed their visa, with 35 applying for asylum.

During the 2012 London Olympics the first claim of 82 from those games was made before they started.

More that 60 people remain in the UK after the 2014 Glasgow games, with almost half applying for or receiving refugee status.

“My advice to people who chose to do what I do is to think properly, if you decide you want to stay, have a good reason and a thing to show the government why you want to stay,” said Ribouem.

He is now married with children, who have never seen their grandmother, but he hopes his efforts for Australia since becoming a citizen a decade ago will be rewarded with a visa allowing her to migrate.

“Australia has give me so much opportunity and to bring my mother here, my two sisters that would be something fantastic for me.

“My father died and they have no man, if something happened to my mother and sisters, I would be very upset, because they are women, back home they don’t have the power.

“I want my mother to come here, I think that’s the priority now,” he said.

The Department of Home Affairs said in a statement to SBS it has worked closely with the organising committee “to ensure Commonwealth Games officials and athletes are aware of their visa responsibilities”.

“Commonwealth Games visitors who do not meet these requirements can expect to have their visas cancelled.

“Games participants are required to apply for a Temporary Activity (subclass 408) AGEE visa prior to their arrival in Australia.  At previous games they were granted a visa on arrival.”

Ms Dale said the government is always ready to receive asylum applications but it is not easy to do.

“The first step is always seek legal advice. There are organisations like Refugee Advice and Casework Service all around Australia who can give advice about their situation, it’s incredibly complex process, it’s not simple, we always say a person needs legal support,” she said.