With the death toll passing 400,000 just before the new president took office, the new administration says it has been shocked to discover the true scale of the crisis.

On his first full day in the White House, US President Joe Biden took aim at his number one priority - the raging COVID-19 pandemic and stumbling efforts to vaccinate Americans.

With the death toll passing 400,000 just before Mr Biden took office, the new administration says it has been shocked to discover the true scale of the crisis.

"What we're inheriting is so much worse than we could have imagined," Jeff Zients, the new White House COVID-19 response coordinator, told reporters. 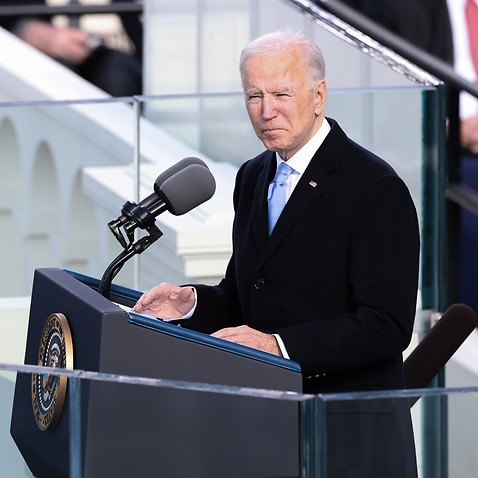 Mr Biden has been busily signing executive orders and other directives to jumpstart a national emergency strategy in the wake of Donald Trump's departure from the White House on Wednesday.

Communications Director Kate Bedingfield told CNN that Mr Biden was invoking emergency legislation to increase industrial production and "just to make sure that we have the material that we need to get these vaccinations into arms around the country."

Mr Biden took office Wednesday in ceremonies heavily marked by the COVID-19 crisis, with only a few spectators at his swearing-in and everyone, from the military band to his wife Jill, looking on from behind face masks.

Mr Biden has identified mask wearing, a revamped vaccination program, and a massive new stimulus bill to help Americans' COVID-hit finances as his top goals for bringing the multi-layered crisis under control.

But he also faces multiple other challenges including the aftershocks of a giant government computer hack blamed on Russia, and searing Trump-era divisions -- an issue that could soon take centre stage in a Senate impeachment trial of the ex-president.

Mr Biden and his vice president, Kamala Harris, began their day by participating in an inaugural prayer service - virtually, because of the coronavirus.

The new president was due to make afternoon remarks on his COVID plans.

Already in his first hours on Wednesday, Mr Biden entered the Oval Office and signed 17 executive orders rolling back and canceling a raft of Trump policies, as well as launching some of his own.

Notable among these was a mandate on mask wearing in federal buildings and new protections for so-called "Dreamers" - children of illegal immigrants who have now grown up in the country and had been shielded from deportation.

Another big blast at his predecessor's record was to immediately put the United States back into the Paris climate accord.

Although Mr Biden won comfortably on 3 November, Mr Trump's efforts to persuade tens of millions of followers that the election was stolen has left the veteran Democrat with a hostile opposition.

Democrats now control both chambers of Congress, but the existing majority in the House of Representatives narrowed in the November election. 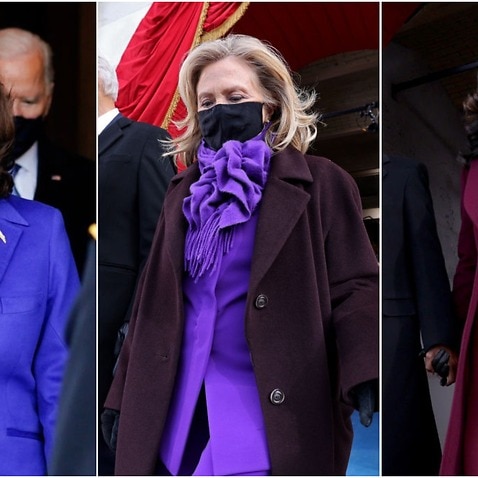 Why Kamala Harris, Michelle Obama and Hillary Clinton all wore purple to the inauguration

In the Senate, the two parties are split 50-50, with a tie-break vote by the new vice president giving Democrats the most razor-thin of margins.

That landscape ensures Mr Biden's administration an uphill climb to get things moving. Even confirmation of his cabinet nominees risks getting tied up.

Late Wednesday, he got his first cabinet-level confirmation: Avril Haines, the director of national intelligence.

And on Thursday, transportation secretary pick Pete Buttigieg, a former rival of Mr Biden in the fight for the Democratic presidential nomination, appeared for a Senate confirmation hearing.