In the ads, Mr Howard warns that Mr Daley plans to water down the gun law reforms he introduced in 1996 after the Port Arthur massacre.

The former prime minister also took a swipe at NSW Labor amid criticism over the party's move to preference the Shooters, Fishers and Farmers.

Mr Howard said the preference decision demonstrated "Labor will do anything to buy a vote, and it's a reason not to reward that kind of attitude".

The Shooters Party was arguing only a short while ago for a repeal of the 1996 National Gun Control Agreement. #nswpol #NSWvotes pic.twitter.com/PMX7v05fML

He said he has no plans to water down the state's gun laws.

"Preferences are completely irrelevant and the Labor party has the most seats on the floor of Legislative Assembly after Saturday, no deals with anyone," he told the ABC. "No coalition with anyone. Absolutely no watering down of the NSW gun laws. I give you my signed pledge in blood on that one."

The Shooters Party was arguing only a short while ago for a repeal of the 1996 National Gun Control Agreement. #nswpol #NSWvotes pic.twitter.com/PMX7v05fML

The Shooters have argued for a repeal of the 1996 National Gun Control Agreement and, if Labor were to win the state election it would put "enormous pressure" on the party to water down the laws, Mr Howard said.

"And that would be at a great cost to community safety."

Mr Daley's comments come after he told reporters on Sunday that a change to NSW gun laws would only occur if the coalition and the Shooters combined to weaken them. NSW Leader of the Opposition Michael Daley at a press conference in Kyogle.
AAP

He said he had not personally spoken with the Shooters, and preference deals were decided by Labor's head office, not politicians.

He ruled out forming a formal coalition with the Shooters, or any other party, but wouldn't rule out relying on them to form a minority government.

"Well let's see about that when we get to it," Mr Daley said.

Premier Gladys Berejiklian on Sunday called on the opposition leader to cut ties with the Shooters, saying Labor's preference deal with the minor party legitimised its cause.

"It concerns me because it legitimises a party, being the Shooters, who support the reduction or dilution of our gun laws," Ms Berejiklian told reporters in Sydney. 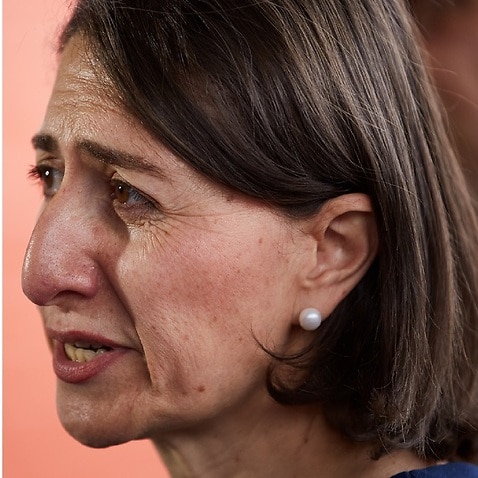 NSW votes: The major issues that will decide the 2019 election

"I don't stand for that, I never have and I never will, and I think the Labor leader and his party need to make the same call."

Labor on Sunday announced it would build six ice detoxification and rehabilitation clinics throughout NSW at a cost of $100 million if elected.

Mr Daley also promised to spend another $100 million to install solar panels on more than 350 schools.

Education Minister Rob Stokes said the government was already installing solar panels and battery storage in up to 1000 schools across the state.

Meanwhile the coalition vowed to give police more powers to search the homes and cars of convicted drug dealers in a test program that will run across four police area commands.

The new court-issued drug supply prohibition order will give police the power to raid convicted drug dealers' properties without a warrant if they have "reasonable grounds" to suspect there is evidence of a drug-related crime.