Pakistan says the Indian submarine was not targetted to 'maintain peace' - but tensions between the two nuclear-armed neighbours have escalated in recent weeks.

Pakistan says it stopped an Indian submarine from entering its water as tensions continue to run high between the nuclear-armed foes.

The development came days after a rare aerial dogfight between India and Pakistan over the disputed territory of Kashmir ignited fears of an all-out conflict, with world powers rushing to urge restraint.

"The Pakistan navy stopped an Indian submarine from entering our territorial waters," a naval spokesman said in a statement.

He said "the Indian submarine was not targeted in line with the government's policy of maintaining peace".

It was the first such incident since 2016, when Pakistan said it had "pushed" an Indian submarine away from Pakistani waters. 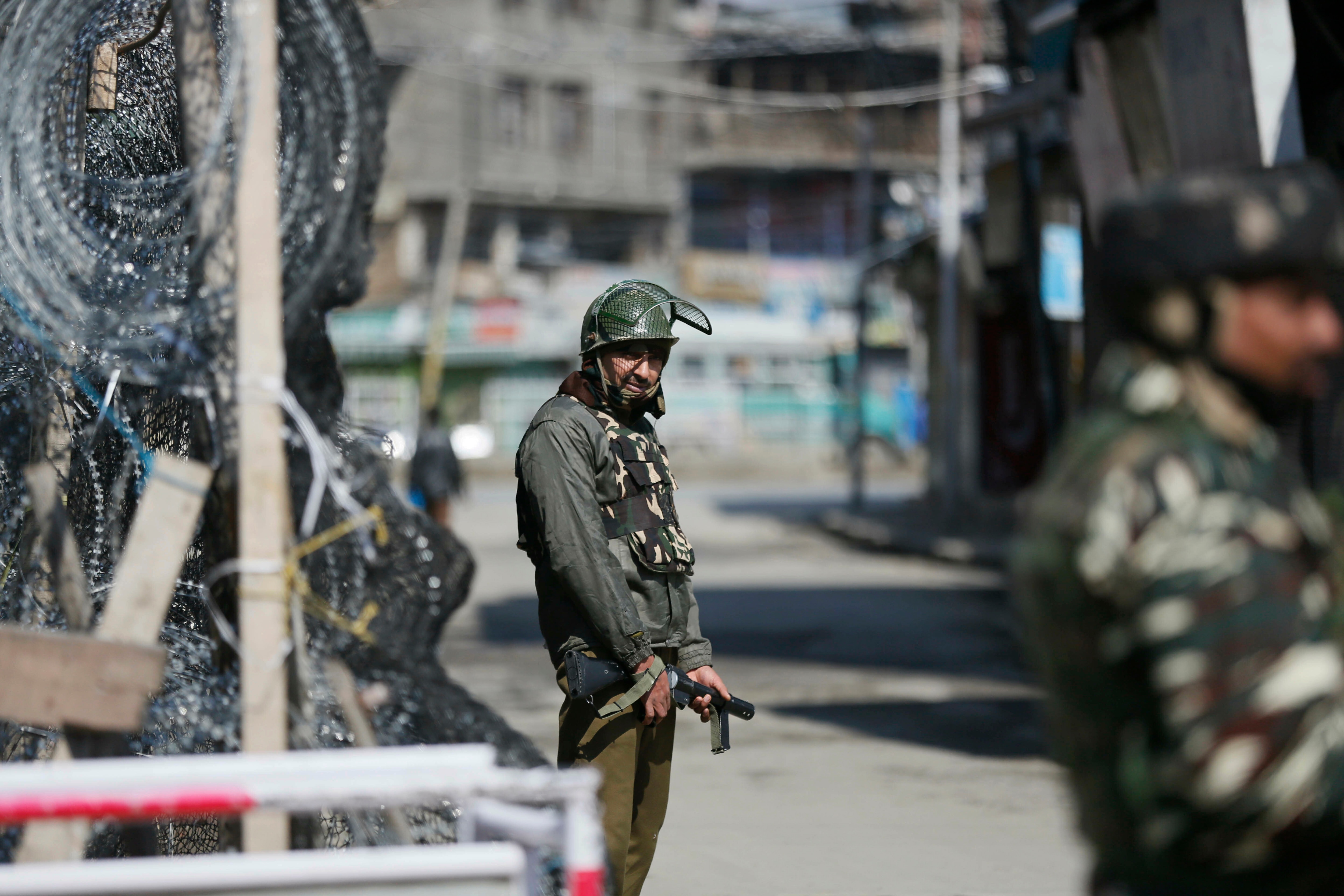 Indian paramilitary soldiers stand guard outside a closed market during a strike in Srinagar, India.
AP

The spokesman did not give further details, including when or where the submarine was detected. It was also not clear if they meant the 12 nautical mile (22 kilometre) territorial waters limit or the broader 200 nautical mile (370 kilometre) exclusive economic zone.

The navy also released what it said was video of the submarine, with the grainy black and white footage showing only what appeared to be a periscope above water. The timestamp on the video clip shows it began at 8.35 pm on Monday. 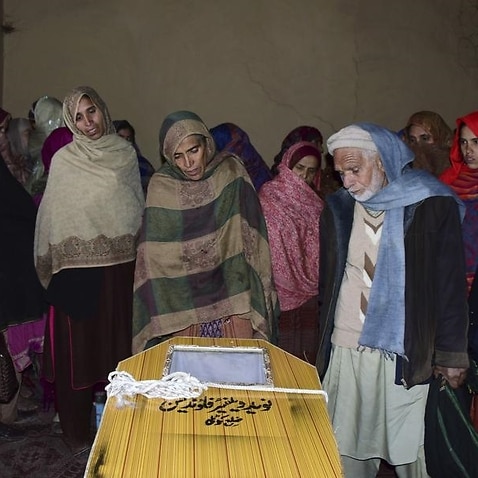 In recent days the nuclear-armed Asian countries have come closer to conflict than in years, after a suicide bombing in Indian-administered Kashmir killed 40 Indian paramilitaries. 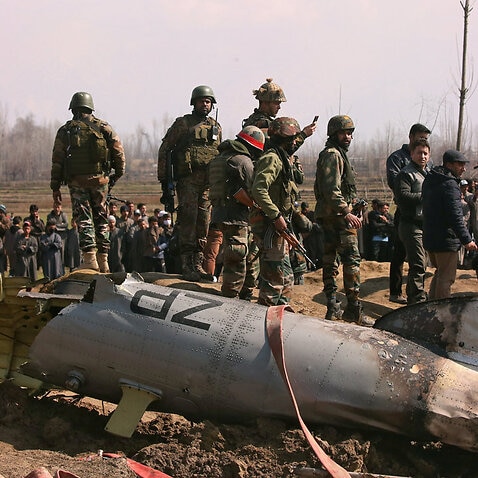 Why do India and Pakistan keep fighting over Kashmir?

A militant group based in Pakistan claimed responsibility for the February 14 blast, and 12 days later Indian jets bombed what New Delhi called a terrorist training camp deep inside Pakistan. 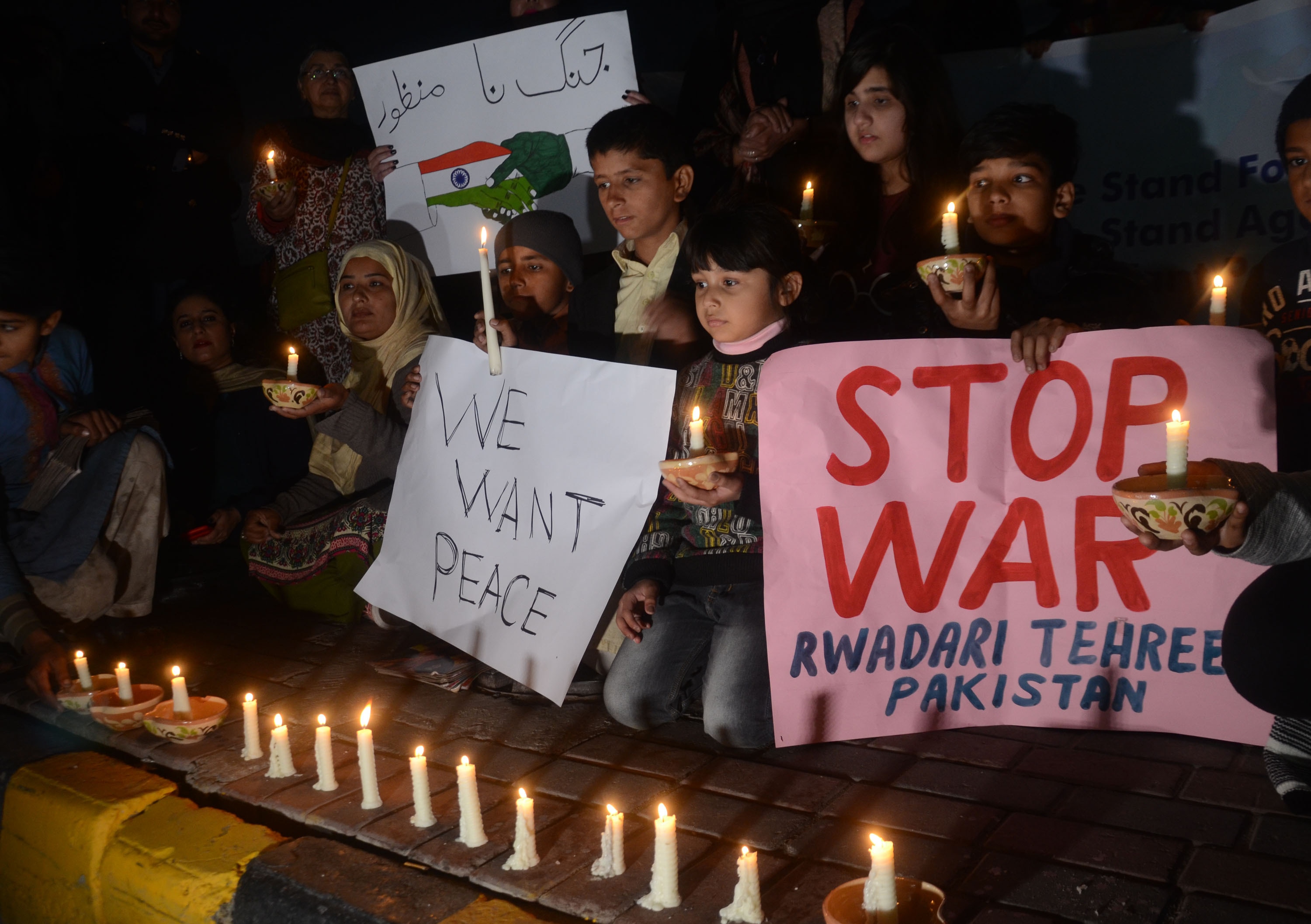 A candlelit vigil against war at Liberty round about in Lahore, Pakistan.
SIPA USA

Pakistan has denied any damage or casualties, and independent reporting has shown that the strikes hit a heavily forested area with little in the way of infrastructure nearby. Residents have said just one person was injured. 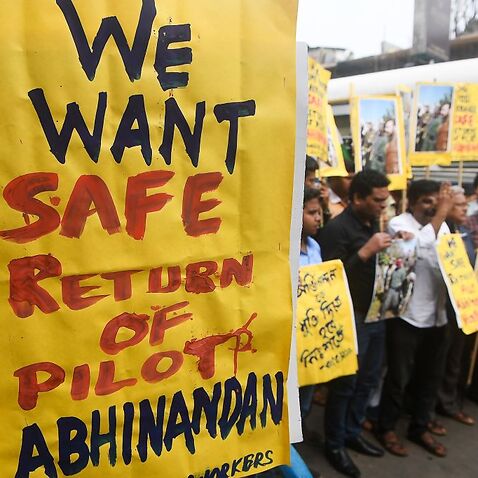 The next day Pakistani aircraft entered Indian airspace and the two nations' jets engaged in aerial dogfights, with at least one Indian aircraft shot down and its pilot captured by Pakistan.

The pilot was handed back to India last Friday in what Pakistani Prime Minister Imran Khan called a "peace gesture". 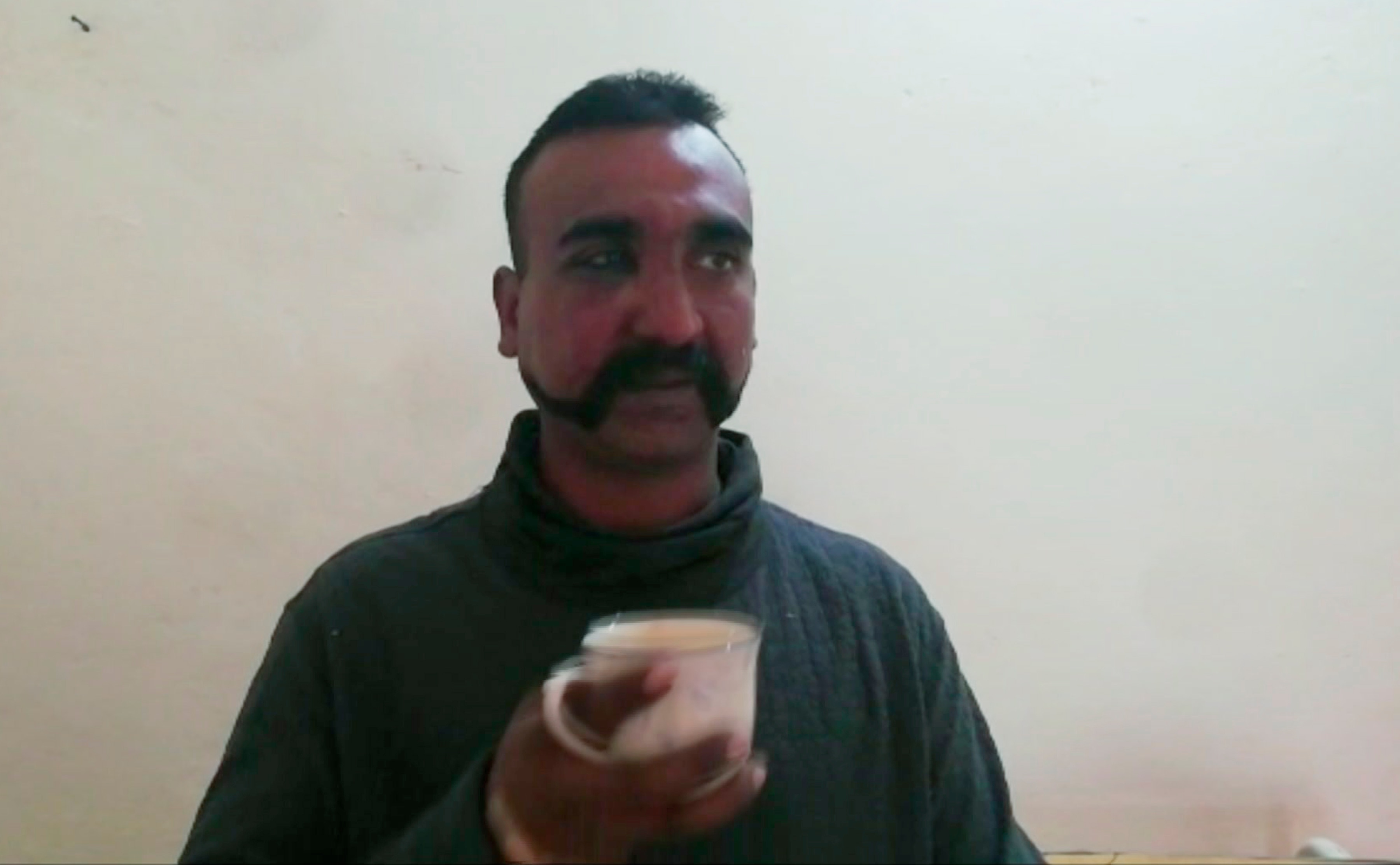 An Indian pilot who was captured after his plane was shot down by Pakistan's Air Force.
Pakistan Military

Both sides also claimed a second plane had been shot down, but they have disputed whose plane it was and what happened to the pilot.

Pakistani and Indian soldiers have continued to fire artillery and mortars over the Line of Control, the de-facto border dividing Kashmir, in the days since, killing several civilians on both sides. 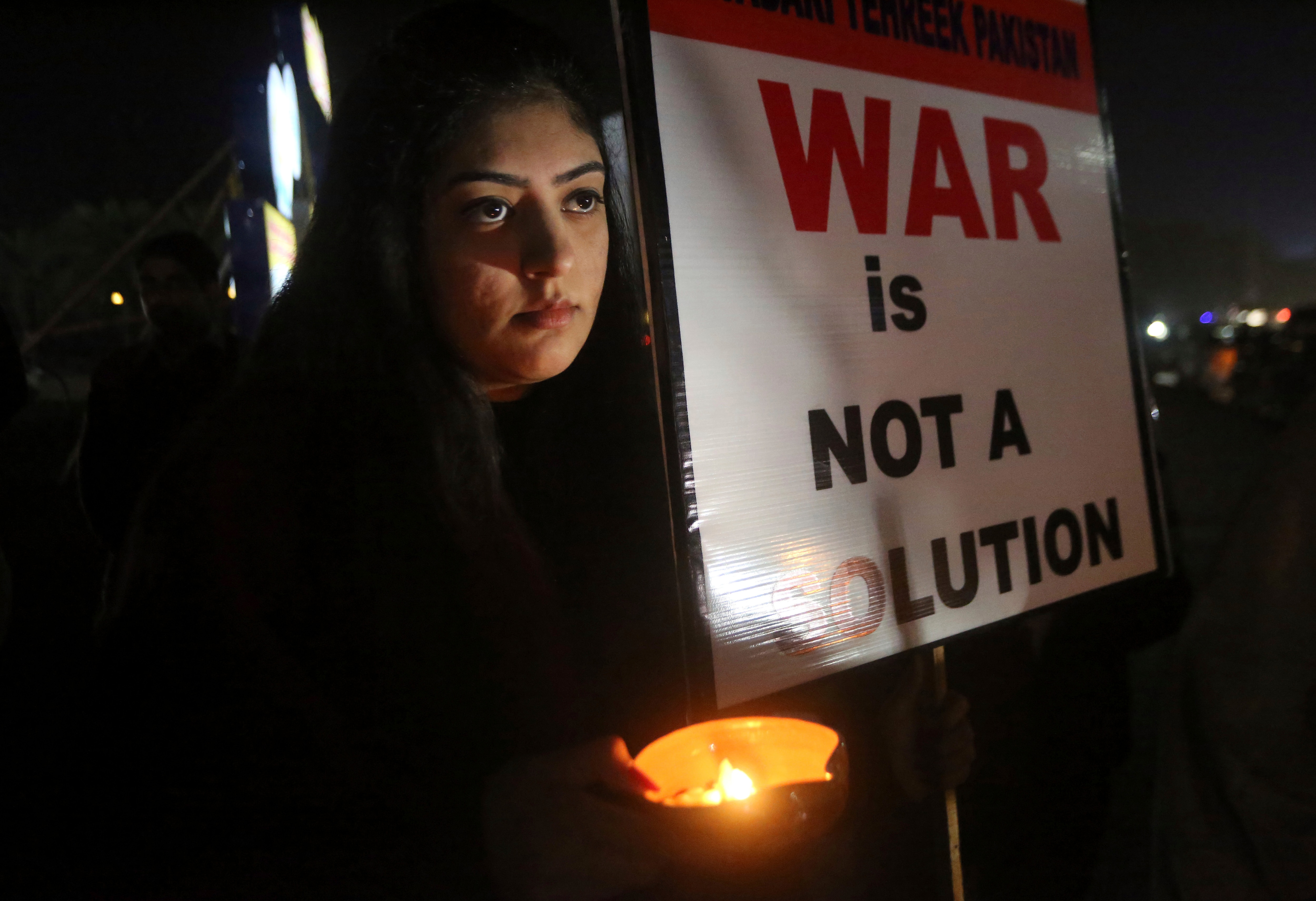 A member of the civil society group, Citizens of Lahore, participates in a candlelit vigil against war, in Lahore, Pakistan.
AP

Unverified reports in Indian media Monday said that a Pakistani military drone which strayed over the border had been shot down.

Kashmir has been divided between India and Pakistan since the end of British colonial rule in 1947. Both claim the Himalayan territory in full and have fought two wars over it.