The Pope made the comments at the Church of the Holy Cross in Nicosia. 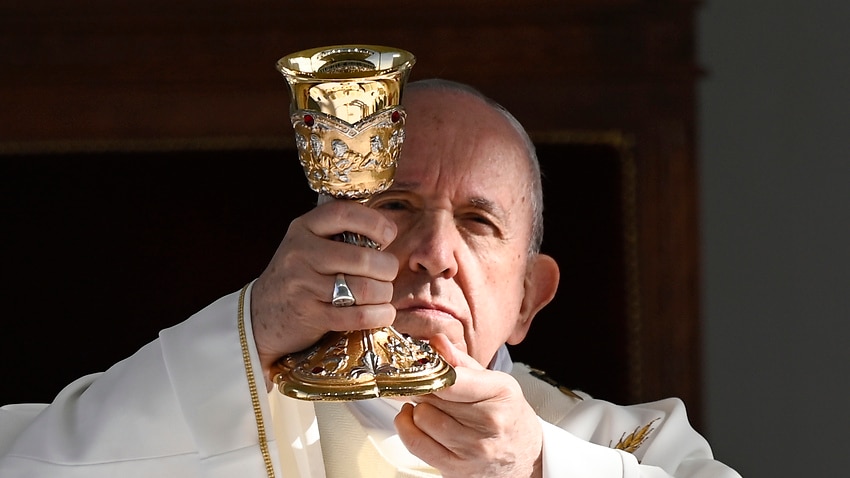 Pope Francis celebrates a Mass during his journey to Cyprus and Greece Source: IPA/Sipa USA

Pope Francis has condemned "slavery" and "torture" in migrant camps, drawing parallels with World War II, during a mass for migrants in the Cyprus capital Nicosia.

"It reminds us of the history of the last century, of the Nazis, of Stalin, and we wonder how this could have happened," he said on Friday.

"What happened then is happening today on nearby coasts," the Pope warned.

Francis was speaking off text at the Church of the Holy Cross next to the UN-patrolled buffer zone that divides the Mediterranean island.

"There are places of torture, people who are sold. I say that because it is my responsibility to open your eyes," he said.

"We look at what is happening, and the worse is that we have become used to it. Getting used to it is a very serious illness," he told a congregation of around 250 people, most of them migrants.

Francis earlier praised "the dream of a humanity freed of walls of division, freed of hostility", saying diversity and individuality are "God's gifts".

The pontiff, who heard testimonies of migrants from countries including Iraq, Sri Lanka and Cameroon, is expected to take back with him 50 migrants.

The plight of migrants and the notion of fraternity have been key themes of the Pope's visit, which he started on Thursday.

The Pope on Saturday flies into Greece for the first visit by a pontiff in two decades, with Athens under high security amid anti-papal sentiment among Orthodox hardliners.

His two-day trip will see him return on Sunday to the island of Lesbos, which he last visited in 2016 during the early years of the migration crisis.

His visit to Athens is the first by a pope since John Paul II in 2001, which in turn was the first papal visit to the city since the 1054 Schism between the Catholic and Orthodox Churches.