A large police presence is on hand to provide a barrier between ultra-nationalists and anti-racism demonstrators at Melbourne's St Kilda beach.

Race Discrimination Commissioner Chin Tan says there's no place in Australia for the "apparent racist" rally organised by members of the far right in Melbourne on Saturday.

The 'Political Meeting at St Kilda Beach' was organised by Neil Erikson, a controversial far-right activist who last year approached former Labor Senator Sam Dastyari in a pub and called him a "terrorist" and a "monkey". 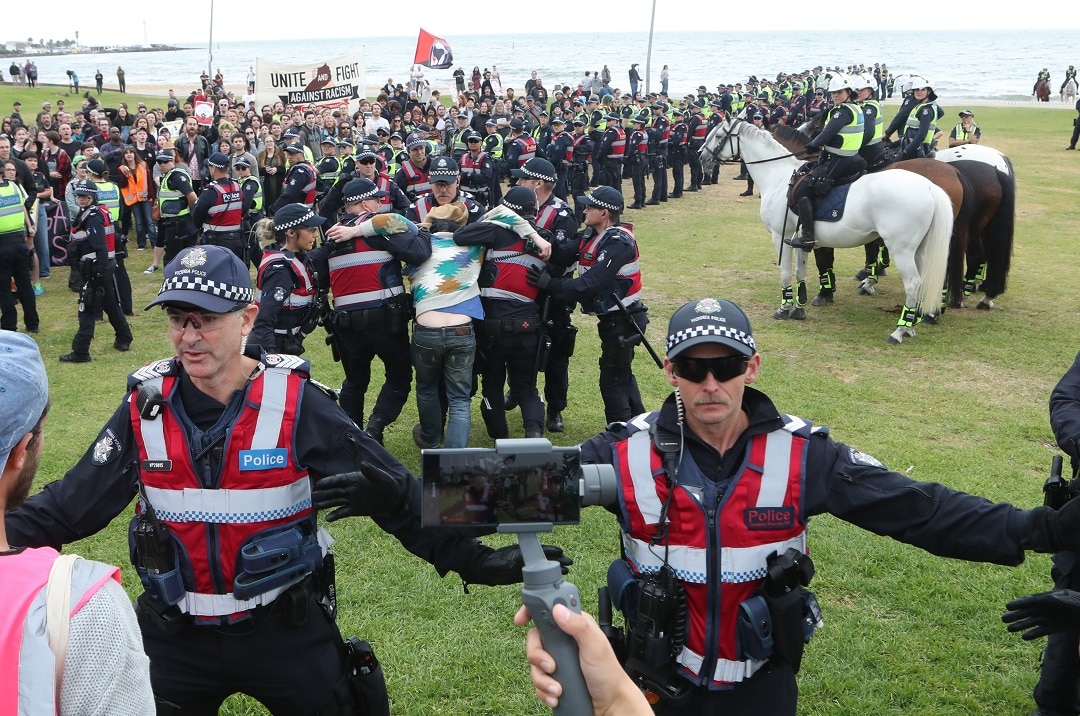 Police keep protesters apart as a man is arrested on the St Kilda foreshore in Melbourne.
AAP

"I condemn in the strongest possible terms the apparent racist and race-based motivation behind the rally. There is no place for such rallies in Australia," he said in a statement.

"Activities that target a community based on their race or ethnicity are unacceptable and have no place in a cohesive, multicultural Australia."

Numerous videos posted to social media appear to show demonstrators hurling abuse at each other, while police detain and remove individuals who appear to make hand gestures to the opposing demonstrators.

Some protesters were seen making gestures similar to Nazi-style salutes.

St Kilda: Chaos is now spilling from the beach as hundreds of police struggle to keep opposing groups apart. Roads have been closed @9NewsMelb pic.twitter.com/rTIV6cA1mm

An 18-year-old man was arrested on the beach after being found with a "dangerous article" about 12.20pm, police said.

"The Sunbury man was interviewed and will be charged on summons with possessing a dangerous article. He was given a direction by police to move away," Victoria Police said in a statement.

"Victoria Police respects people's right to protest peacefully, but will not tolerate those who break the law." Queensland Senator Anning, who now sits as an independent after being booted from the Katter Australia Party following his defection from Pauline Hanson's One Nation, uploaded several videos to his Facebook page from the rally.

In the videos, Senator Anning, who used the Nazi-associated phrase "final solution" in his maiden speech, stands with Mr Cottrell, poses for photos and makes inflammatory remarks about migration.

"I'm here representing a lot of people from Queensland who wish they could be here," Senator Anning said in one video.

"The Andrews government is so weak it's not funny," Erikson told reporters. "And the Police Commissioner and his or her offsider are a joke."

The nationalist rally was met by hundreds of anti-racism protesters.

“Migrants are welcome, racists are not.” Counter rallies have kicked off on the St Kilda foreshore, where a group of protestors are hoping drown out the voices of the United Patriots Front @SBSNews pic.twitter.com/Ic0H8ZTKgc

Spokesperson from the Campaign Against Racism and Fascism (CARF) group Tess Dimos on Saturday morning told SBS News that the group wanted to ensure that "fascists can't mobilise a rally of supporters, or incite racist mob violence, without people coming out en mass to oppose them".

"Our message that people have come out in solidarity with the African community which has been the target of racial abuse and harassment, that we won't stand by while fascists and racists parade along our beaches, and making it clear their gathering and the individuals organising it aren't just random 'concerned citizens' but are neo-Nazis and violent thugs," she said. 'Racism does not make any of us safer': Police on Melbourne beach altercation

"We expect a very large police presence. However, if the fascists and their supporters can freely move around we want to try and have a tight crowd of people to block their access to the main crowds on the beach or into the centre of St Kilda shopping areas."

Victoria Police earlier promised a strict no tolerance approach to anyone making trouble.

Nazis tried to come up behind the anti-fash protest again. Chased back behind the kettle again. Riot police now up against the kettle line. #StandUpStKilda #StKildaPicnic pic.twitter.com/s7Bjc8Myc4

"The safety of the Victorian community is the highest priority for Victoria Police and there will be a strong police presence at the rally in order to main public safety," a Victoria Police spokesperson said in a statement on Friday.

Officers from the riots and dogs squad, mounted and transit police are all out in force on St Kilda beach @SBSNews pic.twitter.com/EYobrSC6Fh

Last year, Mr Erikson and three others were found guilty of inciting serious contempt of Muslims after staging a mock beheading to protest against the building of a mosque in central Victoria. Mr Cottrell tweeted he would be attending the rally "to protest a media and government establishment that forces mass immigration onto us".

Police say all rally participants will be closely monitored to ensure peace is maintained.

"Victoria Police respects people's right to protest peacefully, but will not tolerate those who break the law.

"Anyone coming to the event looking to cause trouble can expect a firm response from police; you will be arrested and held to account if you commit a crime." The violent clash occurred after Mr Erkison filmed a group of Australian people of African heritage playing football at the popular Melbourne location.

"I don't care who it is, whoever is inciting or inflicting violence on communities and causing fear, our police will be there," said Mr Neville.