As this week marks 75 years since the end of World War II, the family of Reginald Saunders tell SBS News why he's a hero to all.

Seventy-five years ago, the most famous Aboriginal soldier in the Australian Army was hunkered down in New Guinea when a radio broadcast the news that the Japanese had surrendered.

It brought an end to the Second World War.

But while Australia celebrated, Gunditjmara man and lieutenant Reginald Saunders, or Reg, continued to lead his men on mopping up pockets of stubborn resistance by the defeated enemy.

With the end of the war, he had achieved a major victory for Aboriginal and Torres Strait Islander people. 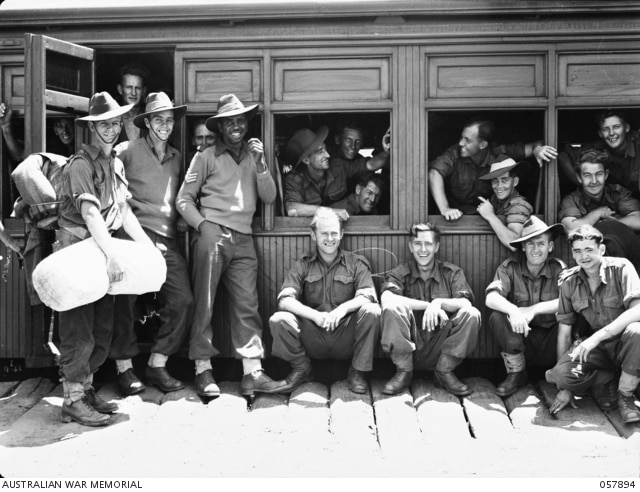 Reg Saunders with members of the 2/7th Battalion in 1943.
Australian War Memorial

Nine months earlier, the 24-year-old made headlines around Australia as the first-ever Aboriginal man to be commissioned as an army officer, finishing near the top of his class. And his legacy still matters today.

“He broke down a lot of barriers and opened a lot of doors for Indigenous people inside the army and outside in the general community,” his great-granddaughter Breanna Humes told SBS News.

“It’s definitely relevant to my generation right now, especially because we are going through the Black Lives Matter movement,” the 19-year-old said.

Saunders was born on a mission in western Victoria and joined the army in 1940 before the federal government fully instituted a ban on Indigenous people in the defence force.

He was following a warrior tradition stretching back to the Australian frontier wars, fighting not for king but country. 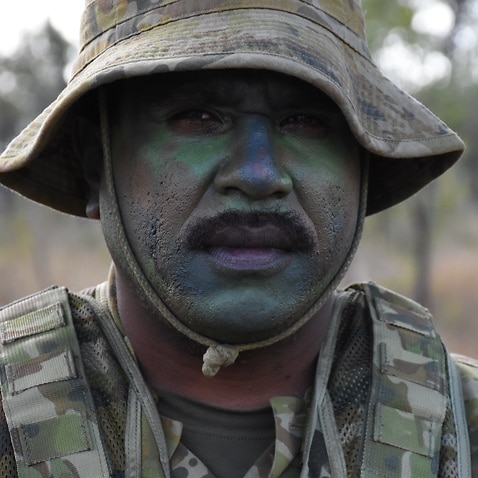 His great uncle served in the Boer War, his father Chris in the First World War, and he was named after his uncle William Reginald Rawlings who fell in France and was awarded the Military Medal.

“That’s part of being a Gunditjmara warrior, mostly all our people have fought in every war that Australia has fought; the Crimean, the Boer," said his eldest daughter, Aunty Glenda Humes.

"He often would talk about the wars we were involved in. He grew up with a history of what a warrior was.” Saunders served in one of the toughest battalions in the Australian Imperial Forces, 2/7th Battalion of the 6th Division.

“Racism wasn’t so clear in the army, they say, ‘We’re all the same colour, we’re all green’.” 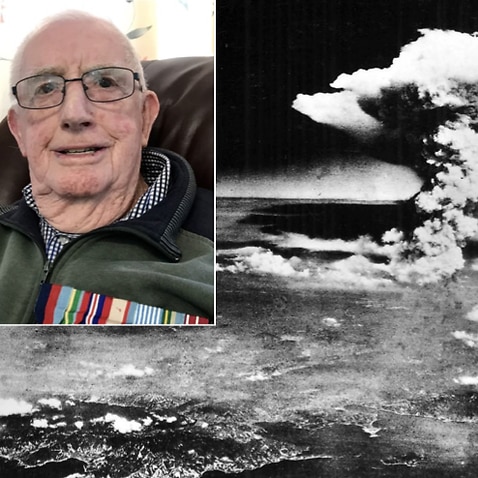 Ron was one of the first Australians in Hiroshima after the bomb. This is what he saw

After fighting in Greece, he survived the sinking of his troopship in the Mediterranean, evaded capture for a year by the Germans after the disastrous Crete campaign before being rescued by a submarine and returned to Australia for officer training.

“And to his family, he’s a superhero, absolutely,” added Aunty Glenda. 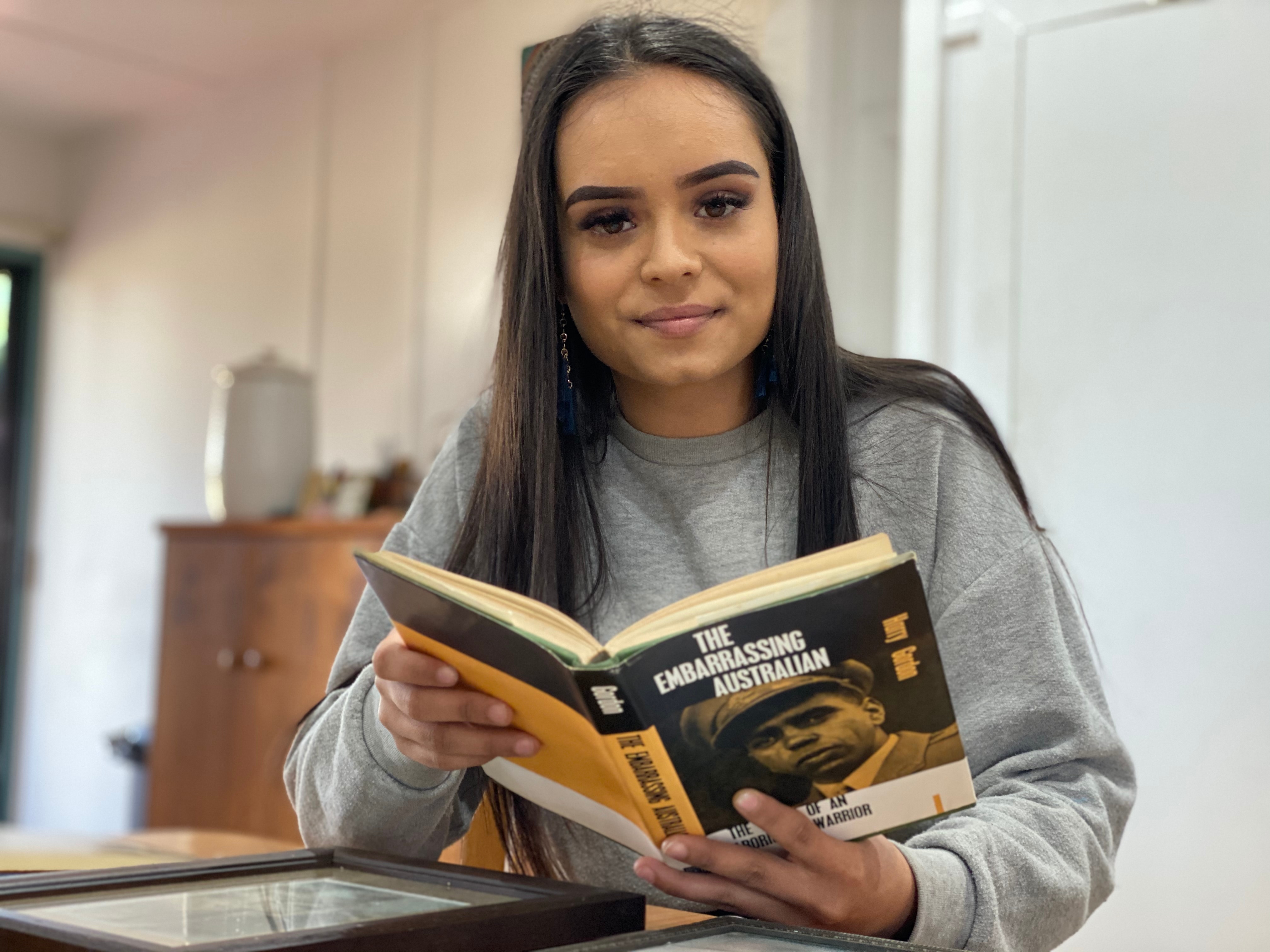 Breanna is inspired the the achievements of her great-grandfather.
Stefan Armbruster/SBS News

At his daughter’s house in the Queensland city of Toowoomba, his daughters show Brianna their father’s photos, mementos, and for the first time, newspaper articles from 1944.

“Lt R.W. Saunders says he is proud to be the first full-blooded Aboriginal to be commissioned into the Australian Army,” said a Melbourne Herald editorial.

“The physical resources and stamina of the original Australian has been attested. Their mental capacity has been more in question mainly among people who know next to nothing about them.

"Actually it has been frequently demonstrated that an Aboriginal of normal intelligence, when all things are more or less equal, can lift himself to the standard of his white brethren.”

“The case of Lt Saunders emphasises this truth.” 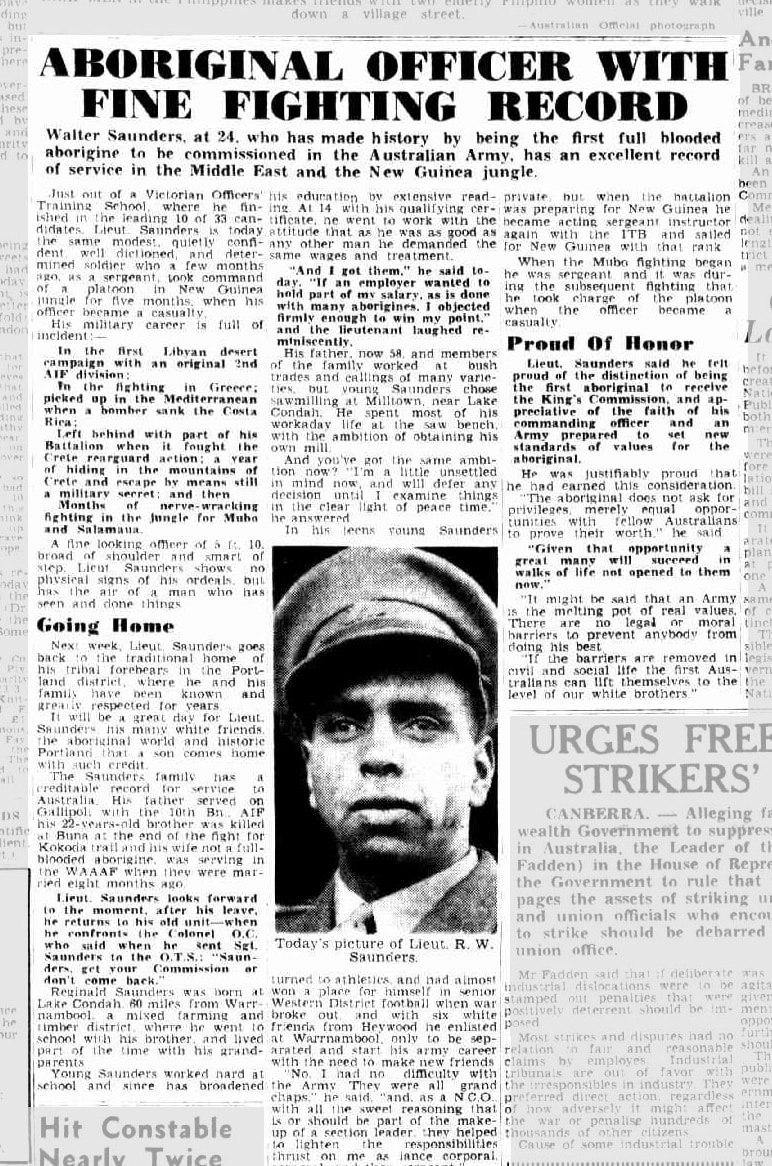 The articles are an eye-opener for university student Breanna.

“Young Indigenous Australians growing up, honestly we could just achieve so much more than people anticipate,” she said.

“I’d like to be an environmental scientist and work on Indigenous land rights, to help our people and our land, especially because of what my great-grandfather did for us,” she said. 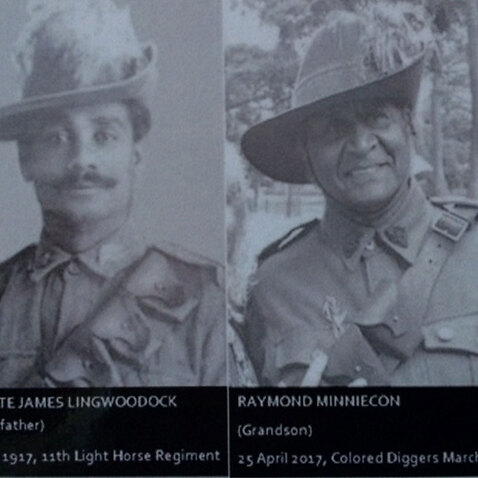 Saunders returned a hero to his comrades-in-arms and they were sent to New Guinea to fight the Japanese, his bushcraft and survival skills proving invaluable for jungle warfare.

With the war over, he was then discharged and while he had made military history, attitudes in the Australian government had not changed.

Volunteering for the service with the British Commonwealth Occupation Force (BCOF) in Japan, the decorated veteran was then rejected because Australian wartime restrictions on non-Europeans enlisting remained in place.

He publicly condemned the policy as “narrow-minded" and "ignorant”.

When it was later lifted in 1949, he rejoined to fight in the Korean War and was promoted to captain - but after four years in the army, he felt frustrated and left. 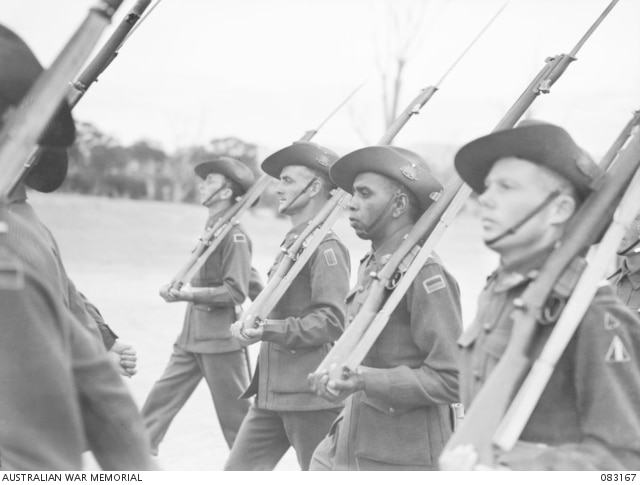 It was only after the 1967 Referendum that he returned to public life, as one of the first liaison officers for the newly created federal Office of Aboriginal Affairs, and was awarded an MBE in 1971.

He continued to advocate for Aboriginal and Torres Strait Islander people until his death in 1990.

A ceremony in 2015 at the Australian War Memorial named a gallery in his honour, the only one dedicated to an individual.

“It definitely means the world for our generation, 100 per cent,” Breanna said.

“Even if he wasn’t my grandfather and we weren’t related, I would have such a tie to the story, being Indigenous, just because of what he has done for the culture, such a change.”