The Australian people have voted in favour of legalising same-sex marriage in the government's voluntary postal survey, triggering Malcolm Turnbull's promise to change the Marriage Act.

The Senate will on Thursday debate the wording of a bill to change the Marriage Act, after Australians voted decisively in favour of allowing same-sex couples to marry in a landmark national survey.

The Yes vote triumphed in the Australian Marriage Law Postal Survey, accounting for 61.6 per cent of the vote, while 38.4 per cent of respondents voted No.

A private member's bill, co-sponsored by both major parties, was introduced in the Senate late on Wednesday afternoon, kicking off a legislative process that could see same-sex marriage legalised by Christmas. 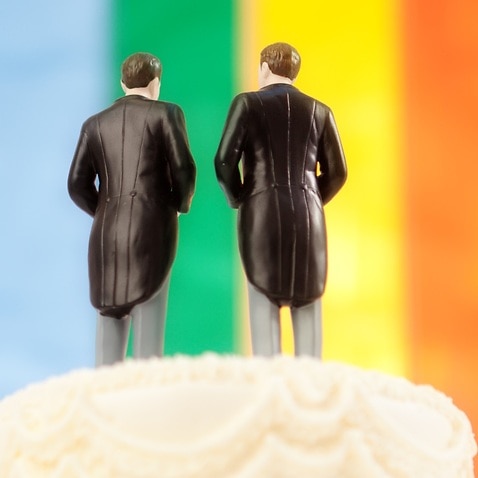 Celebrations were aplenty outside the State Library of Victoria in Melbourne on Wednesday.
Getty Images

Despite some early criticisms that the use of the postal system would make the survey inaccessible, an overwhelming 79.5 per cent of Australian voters did participate, in what the Chief Statistician called an "outstanding" turnout.

Women responded in greater numbers than men at 81.6 per cent and 77.3 per cent respectively.

At the other end of the spectrum, 80 per cent of Australians older than 85 voted.

Same-sex marriage will now almost certainly be legalised in Australia through a change to the Marriage Act. 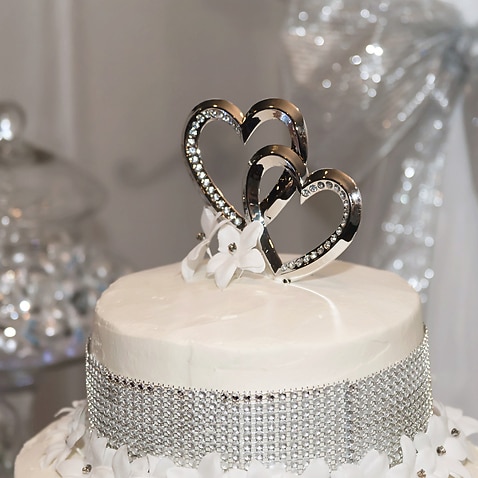 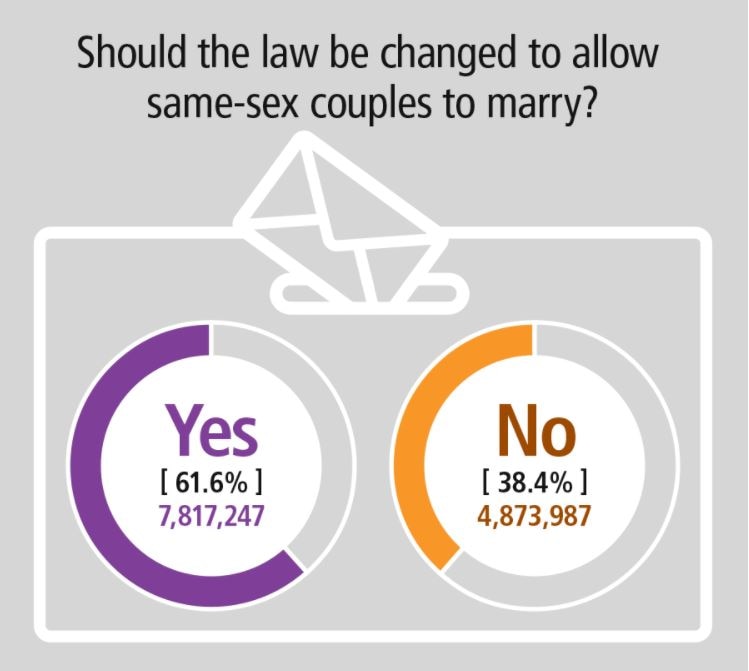 A same-sex marriage supporter waves a white flag with 'our love is real' written on it in Sydney on the day of the announcement.
Getty Images

Turnbull pledges to change the law by Christmas

Prime Minister Malcolm Turnbull said he was committed to changing the law by Christmas.

"Now it is up to us here in the parliament of Australia to get on with it, to get on with the job the Australian people have tasked us to do and get this done this year before Christmas," Mr Turnbull said, speaking immediately following the ABS announcement.

Mr Turnbull has previously said he expected a private member's bill to "sail through parliament".

While Senator Dean Smith's bill has already been introduced to the Senate, the law cannot be changed until the House of Representatives reconvenes for the last sitting fortnight of parliament, which begins on November 27.

Labor leader Bill Shorten is also pushing for the law to be changed as soon as possible. Exactly how the Marriage Act will change remains an active debate within the Coalition.

Conservative Liberals are pushing for stronger religious protections, to shield individuals and companies who did not want to participate in same-sex weddings.

Two Liberal senators had released very different bills - the moderate-backed Dean Smith bill, which was introduced to the Senate on Wednesday, and the James Paterson bill favoured by conservatives.

But late on Wednesday evening, Senator Paterson dropped his plan to introduce a competing bill. He now plans to negotiate amendments to the Smith bill instead.

While the Smith bill allows churches to refuse to marry same-sex couples, the Paterson bill would have allowed anyone with a religious or moral objection to refuse to participate in the process – including florists, bakers and musicians.

It would also protect anyone voicing or acting on a belief that marriage should only be between a man and a woman from discrimination and vilification laws. Coalition For Marriage's Lyle Shelton delivers a speech to the No camp on Wednesday.
Getty Images

Mr Turnbull has indicated his preference for the Smith bill, which has been co-sponsored by Labor and the Greens.

"The Smith Bill has the advantage of having been around for some months now. Everyone is familiar with it, it has a wide degree of support across the chambers," he said.

But Mr Turnbull did not rule out amendments to the wording.

"Of course there's the opportunity to move amendments it and improve it," he said.

Senator Dean Smith himself said changes could be considered, but cautioned against the provisions in the conservatives' bill that would allow service providers to discriminate against same-sex couples who were planning their weddings.

"If there are amendments, let's see them. But let's be very clear about this: Australians did not participate in a survey to have one discrimination plank removed, to have other planks of discrimination piled upon them," Senator Smith said.

Attorney-General George Brandis said he would support an amendement that allowed civil celebrants - as well as religious celebrants - to refuse to marry same-sex couples. Lyle Shelton, the head of the Australian Christian Lobby and spokesman for the No campaign, said the result was "decisive" and congratulated the opposing campaign on their victory.

"Democracy hasn't gone our way today but I thank God that we live in a free and open and democratic society and I trust those people who have been energised by this campaign will continue to participate in our democracy," he said.

He credited the victory to a long-running and vigorous Yes campaign.

"As everyone will know, they have been campaigning for at least a decade," Mr Shelton said.

"This is a democracy. They have been relentless in this and they have seen the fruit of their relentlessness."

But he said the No campaign's efforts would now refocus "on the parliamentary process".

Mr Shelton described the religious protections in the now-abandoned Paterson bill as the "bare minimum".

Liberal MP Craig Kelly, who supported the No vote, said he would vote for same-sex marriage in the parliament because a 58 per cent majority in his electorate of Hughes voted yes.

Strong No vote in Western Sydney seats held by Labor

Around the country, 133 electorates voted Yes while 17 voted no.

But some of the strongest No results were in Labor seats, despite the party's official election promise to support same-sex marriage.

Ten of the No-voting seats were located in west and south-west Sydney.

Support for same-sex marriage was lowest in the Labor MP Jason Clare's seat of Blaxland, where just 26 per cent of voters wanted the law to change.

In adjacent Watson, also in Sydney's south-west, only 30 per cent voted Yes.

Watson's local MP is Labor's Tony Burke, who said he would still be supporting the Yes position in the parliament.

"I went to the last election with a commitment to vote yes. That doesn't change," Mr Burke said.

"My community knows that if they are treated with prejudice, vilified or marginalised in any way I will stand up for them regardless of polls. The same applies to this issue."

Timeline of same-sex rights in Australia

1961: Australia introduces its first Marriage Act, but it does not include a formal definition of marriage
1975: South Australia becomes the first state to decriminalise male homosexuality
1976-1997: Other states and territories decriminalise male homosexuality
2004: The Marriage Act is amended to add the definition that "marriage means the union of a man and a woman to the exclusion of all others"
2009: De facto couples are given similar rights to those who are married
2013: Federal Labor government makes it unlawful to discriminate against LGBTIQ (lesbian, gay, bi, trans, intersex, queer) people
2015: Conservative coalition government commits to a national plebiscite proposal on same-sex marriage
November 2016: Upper house Senate rebuffs the government's plans for a national plebiscite on gay unions
August 2017: Senate knocks backs national plebiscite proposal again, government pushes ahead with a national voluntary postal vote
September 2017: Ballot papers for the postal vote are sent out
November 15, 2017: Some 61.6 percent of eligible Australians vote in favour of changing the law to allow same-sex couples to marry