Archaeologists are now quickly documenting sites built before Stonehenge and the pyramids before climate change erases them.

Off the north coast of Scotland, Orkney’s soft green landscapes hold a trove of things from everyday life before history was written.

More than 3,000 archaeological sites — among them standing stone circles, Norse halls and a Neolithic tomb graffitied by Vikings — have endured for millenniums, scattered across the roughly 70 islands that make up the Orkney archipelago.

At Skara Brae, one of Europe’s best-preserved Stone Age villages, kitchens built around 3180 BC are fitted with hearths and cupboards, bedsteads and doors that could be bolted shut.

Today, in forays to remote spits of land, people are working to save some of these places for posterity from the climate changes accelerated by human activity.

About half of Orkney’s 3,000 sites, many built before Stonehenge or the pyramids, are under threat from those changes, according to the county archaeologist. Some are already being washed away.

Since 1970, Orkney beaches have eroded twice as fast as in the previous century. Others that had been stable are now shrinking. Rains, falling heavier and more often, are dissolving the crusts of soil and sand packs that protect remnants of civilizations. These threats, now familiar at world heritage sites around the globe, are being answered in Scotland by archaeologists, citizen-scientists, students, government agencies and academics.

Their work is urgent. Orkney’s stories are recorded in disappearing ink.

“Heritage is falling into the sea,” said Jane Downes, director of the Archaeology Institute at the University of Highlands and Islands. “It’s a very dramatic and obvious sign of sea level rise and increased storminess.”

From around the world, troops of archaeologists and students descend in the summers to dig, sift and catalog imperiled places. There are scrambles for funds. “We’re focused on coastal sites because they’re going to be gone,” Downes said.

At many spots, the only plausible kind of preservation is documentation — done swiftly.

In 1983, an archaeologist drew sketches of a Neolithic chambered tomb at the tip of a peninsula on Sanday island. Then the site was left essentially untouched until last year, when other researchers returned, planning to deploy new tools that would tell them where the people of that area came from and what they ate.

But the tomb and its archaeology had shrunk: five feet had been lost to cliff erosion, and it was evident that the remaining 40 feet were headed for the water as well. 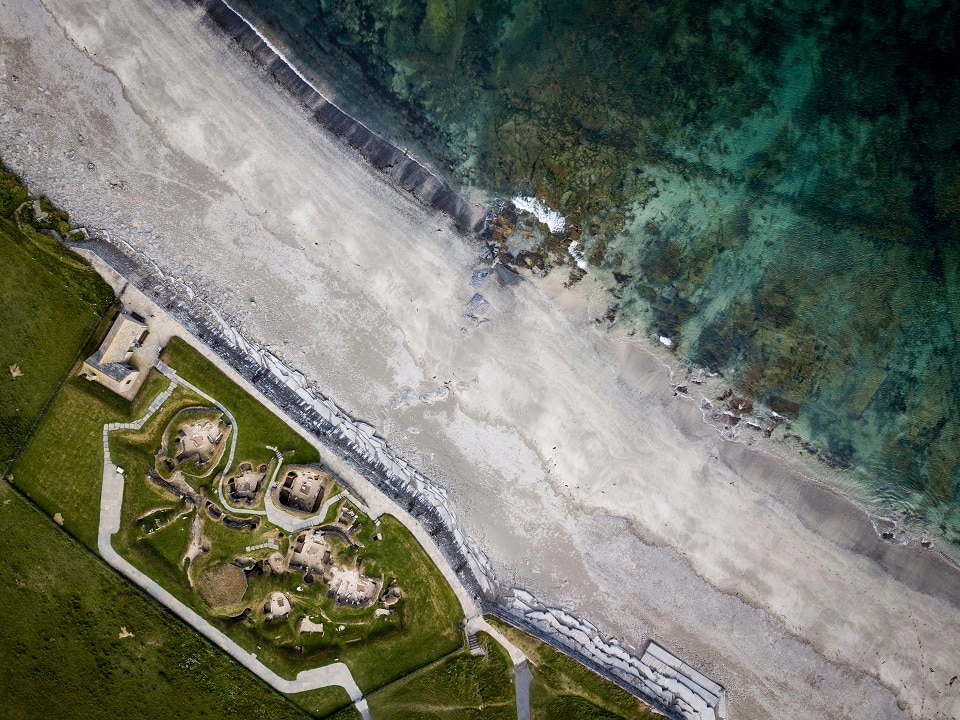 At the end of the summer digging season, students packed the site with rock and a thick plastic membrane. Depending on the severity of the winter storms, the protection might keep some of the fine sediments from washing away, and also allow another year of excavation at the deteriorating tomb.

In a short walk along the south shore of Rousay Island, a stunning arc of human activity comes into view. One mile covers 50 centuries: the Stone, Bronze and Iron Ages. The Picts, the Viking era, rule by the Norse, and Scottish landlords.

The burial of a cow on Rousay in 1963 led to the discovery of human graves and, in them, evidence of long-distance travel. For instance, a silver brooch inlaid with amber and gold filigree from about 750 AD is similar to Irish jewellery of the era, said Julie Gibson, a lecturer with the University of Highlands and Islands and the co-author, with the photographer Frank Bradford, of “Rising Tides: The Loss of Coastal Heritage in Orkney.”

Nearby, in a Viking cemetery, Gibson said: “They found two guys buried in boats. One was born north of the Arctic Circle.”

At the Knowe of Swandro, on Rousay, tribes built atop the homes of predecessors, creating layers of habitation back to Neolithic times. One discovery at Swandro this summer was a rock anvil used 1,500 years ago by a Pictish coppersmith, still smudged with the carbon grime of the forge.

“You can see where the smithy put his hand and his knee,” said Steve Dockrill, a senior lecturer at the University of Bradford. A house in Skara Brae, one of Europes best-preserved Stone Age villages, in the Orkney Islands in Scotland, July 29, 2018.
NYTNS

The anvil is among the finds that have emerged since 2010, when Julie Bond, an archaeology professor at Bradford, strolling the beach at Swandro, spotted a stone jutting up. She performed a field test. “I gave it a kick,” Professor Bond said. “The kick is an important archaeological tool.”

The Swandro project has a charitable trust to support equipment, tests and housing. Virtually all the Orkney digs rely on donations to supplement thousands of hours of free labour from students. In early August, as professors and students from Bradford, Highlands and Islands, Orkney College, the City University of New York and elsewhere finished their summer fieldwork, they hoped the sites would be there the following year.

Each tide washes away midden — domestic waste heaps — that provide a “cultural and economic biography,” Bond said. “We did core sampling at low tide eight years ago, and you could see settlement materials. When we did it again a couple of years ago, it was gone.”

From 2012 to 2016, more than 1,200 volunteers, trained by the Scottish Coastal Heritage at Risk project at the University of St. Andrews, mapped vulnerable sites in Scotland, scores of them on the Orkney and Shetland islands. The report is, in effect, a guide for archaeological triage.

In 2015, a community group on Sanday painstakingly moved a mysterious Stone Age structure known as a burnt mound to a heritage centre, away from the shorefront where it was being battered.

Elsewhere, residents are sandbagging an 11th century graveyard to keep skeletons from spilling out. Public agencies are using laser scans to map changes to the beach in front of Skara Brae, where the waters of the Bay of Skaill lap ever closer. 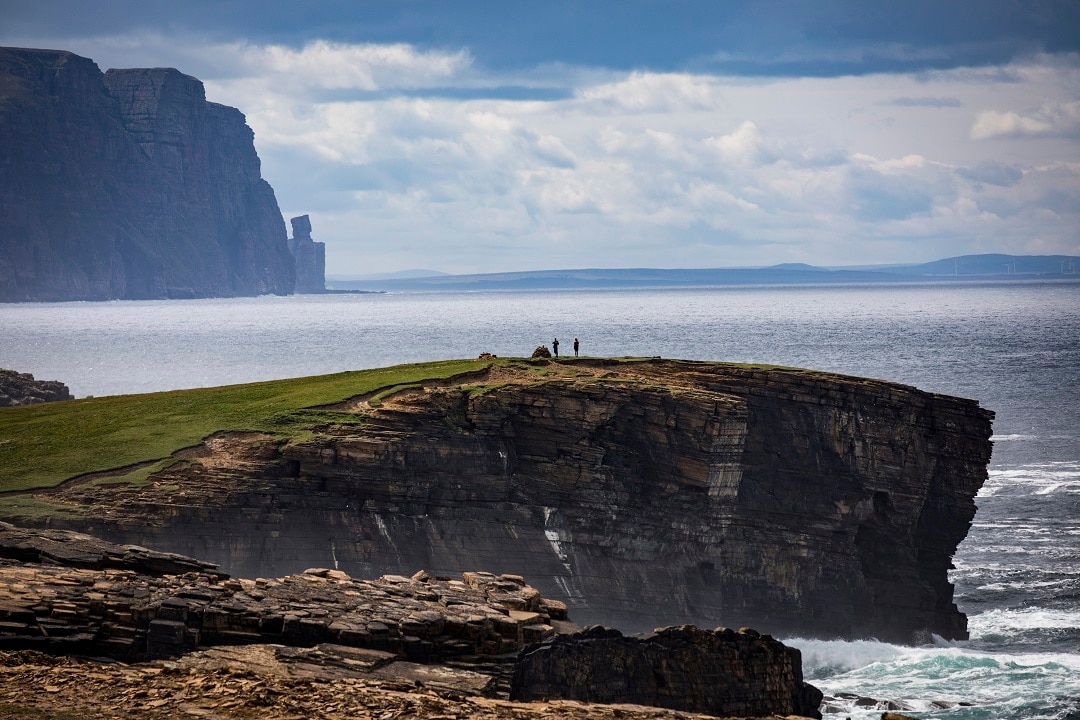 The landscape around Mainland, one of the Orkney Islands in Scotland, Aug. 1, 2018.
NYTNS

Thanks to the sea wall, Skara Brae remains intact, Gibson said, in contrast with an unprotected mill a few hundred yards away that has been demolished by tides and storms since 1972. Similarly, the Midhowe Broch, an Iron Age tower on Rousay, has been successfully defended since 1934 by a sea wall. “We’re learning where physical structures can be used for a limited time, and others that can work permanently,” Gibson said. “Permanently, meaning 100 years.”

Natural changes in climate over the last 15,000 years made human habitation not only possible on the islands, but attractive to succeeding generations. The farmers and fishers put little pressure on the land, other than depleting the timber. Stone was a primary building material. Things lasted.

With tide and time, most beaches will grow and shrink as the sand and sediment subtracted from one spot are added to another. But nature’s rhythms are being accelerated by human actions.

“Sea level in Orkney has been rising over thousands of years, and so coastal flooding and beach erosion is nothing new,” said Jim Hansom, a professor of geomorphology at the University of Glasgow and principal investigator for Dynamic Coast, a report commissioned by the Scottish government to assess coastal change. “What is of concern is that the extent and pace of erosion since the 1970s has increased.”

Some Orkney beaches have narrowed an average of 16 inches per year since 1970, compared to an annual average loss of 8 inches between 1890 and 1970, according to data in Dynamic Coast. In addition, Hansom said, more beaches are eroding.

Rainfall in Northern Scotland increased nearly 26 per cent from 1961 to 2011, according to Historic Environment Scotland, the public steward of Scotland’s historic sites, which has studied risks to Scottish heritage from climate shifts.

“The changes have speeded up,” said Mairi Davies, climate change manager for the agency. They are, she said, significantly faster than at any other point in the last 100 years.

The new extremes have led to archaeological epiphanies.

Jane Downes works at an archaeological site on Sanday, one of the Orkney Islands in Scotland, July 30, 2018.
NYTNS

Walking across Cata Sand on the island of Sanday on a windy December day in 2015, Downes and colleagues noticed an upright stone and red soil that turned out to be hearth scrapings. They found an early Neolithic house, older than those at Skara Brae.

With students and archaeologists from her own school and the University of Central Lancashire, Downes has spent the last three summers digging between tides and documenting the artefacts.

The waters and storms that exposed these sites will also, before long, destroy them. The coastal survey forecasts that Cata Sand will lose about 80 feet of beach by 2050.

“That’s why this site is so important in trying to understand the lives of past societies,” Ross Drummond, a student at the University of Highlands and Islands, said. “The archaeology will be washed away for good, and future generations will only have our records and findings to go on to understand the story of Cata.”

In 1999, a few Orkney treasures were listed as world heritage monuments by UNESCO, which said the islands had been a “center of innovation and experimentation” in art and architecture that spread throughout the Neolithic world. Among them is Maeshowe, a passage tomb built in 3000 BC.

Its entryway aligns with the setting midwinter sun, much like a tomb at Newgrange, 500 miles south in Ireland. (More than 4,000 years after Maeshowe was built, Vikings broke in and carved runes on the walls. A fit-to-print graffito roughly translates as: “Thorfinn wrote these runes.”)

The most sprawling neolithic Orkney site, the Ness of Brodgar, is only now emerging on a neck of land surrounded by water. Its discovery was pure serendipity.

In 2003, a couple hired a farmer to plow a sheep field outside their retirement home to ready the ground for a wildflower meadow. On the final turn, he hit a stone — one that had notches carved into it. The stone was part of a group of monumentally scaled structures, all buried.

Near them was an impossibly massive wall, also buried, 18 feet thick in places. Until then, the area’s landscape had been dominated by two circles of standing stones, the Ring of Brodgar and the Stones of Stenness (they appear on the album cover of Van Morrison’s “The Philosopher’s Stone”).

The Ness totals 6 acres, about eight American football fields, and is rich with artwork and heaps of cattle bone from mass feasts, said Nick Card, director of the site. With less than 10 per cent excavated, he said, 35,000 items have been collected.

Archaeologists and students trowel the soil, whisk dirt off promising bits, then bag them.

“I thought you’d have to be really lucky to find anything,” Kaehlin Terry, 22, a senior from Willamette University in Oregon, said. “But every 20 seconds, you come up with pieces of bone, stone tools, pottery.”

Across vast historical ages, ordinary time scales blur. The grand spaces at the Ness of Brodgar, like the homely kitchens of Skara Brae and the tomb at Maeshowe, were built thousands of years before scribes first told of Buddha and Moses, Lord Vishnu and Jesus Christ.